Money is currently pouring into the Australian biotech sector. Market leader CSL Limited (ASX: CSL) continues to experience strong returns, having grown 54.33 percent in YTD period (as on 2 December 2019) to become the second-most valuable listing on the ASX. There are numerous high growth shares in the sector that seems to be benefitting from CSLâs success, as investors clamour to get in on the action.

However, when seeking the next wonder stock, it is essential to look at the bottom line.

The increase in CSLâs valuation is likely to be driven by a stellar year, with profit growth of 17% and the reported expectation of another strong year to come. Clearly the growth in this share price is not based on pure speculation. But such a strong outlook is an exception, not the rule, for most of the biotech sector. Which brings us to the all-important question: is this a bubble?

Itâs been a strong year for the ASX 200 in general, which has finally recovered to the level only seen in pre-GFC times. But a savvy investor might be inclined to ask where this excess capital is coming from. Real wages are stagnant, and the economy is slowing down.

There has been a shift towards expansionary cash rates from the RBA, which generally leads to cheaper credit and a greater cash flow in the economy. And when asset growth is driven by surplus credit rather than real economic growth, its often a sign that it is not the asset value which has risen, but just the price. And itâs when this process gets out of hand that you end up getting a bubble â pockets of the economy that have overinflated to far beyond their worth. Is that what weâre seeing?

Unfortunately, the only certain way to identify a speculative bubble is in hindsight. You only know itâs a bubble when it pops, and the asset price experiences a sharp and severe devaluation. Once investors realise the stock is being overvalued, they will be willing to pay less for it, and then more and more investors try to divest before the share price tanks, which leads to a collapse in the valuation.

So how do you tell if an asset is being overvalued?

The key is to cut through the hype and look at the companyâs main indicators of value. If the share price seems to have significantly diverged from the figures that should underpin it, itâs likely that it has become a target of speculation.

For a case study, consider an international biopharmaceutical entity Clinuvel Pharmaceuticals Limited (ASX: CUV). It is devoted towards developing medicines for curing numerous issues related to the skin.

The ASX listed companyâs main revenue source is the treatment for the rare skin disease âEPPâ, which is sold in parts of Europe and, significantly, has just been approved for sale in the US. The company has recently experienced huge growth in its share price, growing from just $3.75 five years ago (October 2014), to a peak of $45 in October 2019, with the current market cap of about $1.33 billion (as on 3 December 2019).

Now letâs look beneath the bonnet. Revenue and other income of CUV was noted at $32 million in the financial year report, for the period closed 30 June 2019. Net profit before income tax was recorded at $18.11 million, while profit after income tax benefit was at $18.13 million. 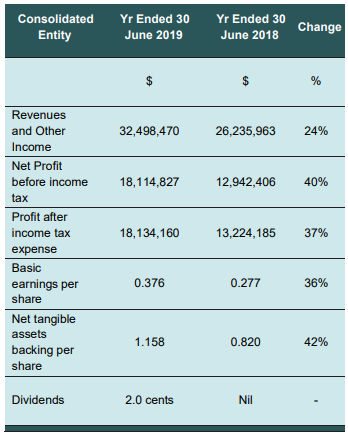 On the outlook front, CUV mentioned that the European business produced a strong foundation of earnings to fund the expansion in the areas as follows:

Whatâs more, the skin condition EPP that CUVâs product treats is so rare, it is estimated that only 10,000 people experience it in the whole world. This means the total possible market for this product, sold at its current price, is about $1 billion â about half of where speculators valued it.

Since its peak at $45 the share price has fallen to about $26.400, dipping by 1.749 percent compared to its last close (as on 3 December 2019), suggesting that the market agreed it was overvalued, and adjusted downwards accordingly. Only time will tell if the same fate is coming for similarly inflated biotech stocks.