Is Investment In ASX Lithium Stocks A Good Option?

In the wake of lower interest rate-environment in the Australian economy, investors might be interested in looking for alternative investment options that can deliver better returns. One of the fascinating investment option that is catching investorsâ attention is lithium stocks.

As per the Australian government, lithium has a bright future in Australia, with most of the projections delivering increasingly positive trends. Australia is well positioned to meet the growing demand for lithium across the world, with many pegmatite-hosted, hard-rock lithium resources, mainly in Western Australia.

Considering this, let us take a look at few lithium stocks trading on the Australian Stock Exchange below:

West Perth-headquartered Pilbara Minerals Limited (ASX: PLS) owns 100 per cent interest in Pilgangoora Lithium-Tantalum Project that is located in Western Australiaâs resource rich Pilbara region. The project is considered as one of the leading tantalum and lithium projects across the world. The company has been highly successful in advancing the project, taking it from the initial drill hole to production in less than four years.

In August this year, the company informed that it will consider an incremental and optimised pathway to the expansion of Pilgangoora Project to Stage 2, following the completion of its strategic partnering process. As per the company, the incremental approach to Stage 2 expansion provides potential for better alignment and lower upfront CAPEX with customer requirements and current market conditions over time.

The company has recently released its operational and financial updates for the first half of the financial year 2019. During the half-year, Galaxy focussed on operational execution at Mt Cattlin that reported a record quarter of production in Q2 2019. The operational outcomes achieved at Mt Cattlin included strong production volumes and enhanced product quality and lower operating costs. The company has targeted for the production volume of 45,000 â 55,000 dmt, and shipment volume of 60,000 â 70,000 dmt for Q3 2019. 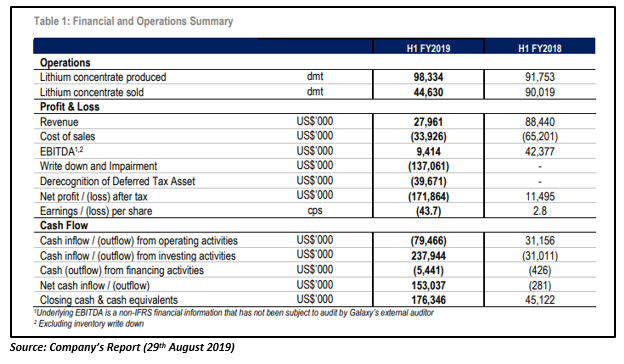 GXY ended the trading session at $1.140, with a rise of 0.89 per cent relative to the last closed price. The stockâs market cap was recorded at $462.7 million, with approximately 5.03 million shares in rotation. The stock has generated a substantial return of 380.85 per cent in the last five years.

Lithium Australia NL (ASX: LIT) is a Perth-based company that intends to supply sustainably and fairly sourced materials to the battery industry across the world. The company has created a portfolio of alliances and projects and developed pioneering extraction processes to transform all lithium silicates to lithium chemicals. The company plans to generate advanced components from these chemicals for the lithium-ion battery industry.

The company has recently established the potential for new supply stream based on recycled battery products by recovering critical battery metals from spent lithium-ion batteries. In a recently conducted test work with ANSTO (Australian Nuclear Science and Technology Organisation), it has been found that LITâs proprietary refining technology generates lithium phosphate of more than 99.9 per cent purity with expected lithium recoveries of more than 85 per cent. The nickel and cobalt recoveries have also been estimated at over 90 per cent in the test work.

In its recently released annual report, the company reported an operating loss after income tax of $11.57 million for the year ended 30 June 2019 against a loss of $8.1 million in the prior corresponding period. The company also recorded a working capital surplus of $2.48 million and a cash balance of $2.7 million at the end of FY19. The below table summarises the key financial metrics reported by the company:

New South Wales-headquartered Lake Resources NL (ASX: LKE) focusses on the development of lithium projects. The company holds five significant projects in Argentina, with four of them located within South Americaâs Lithium Triangle. Around 50 per cent of the worldâs lithium resource is produced from the Lithium Triangle at the lowest cost.

The company reported high-grade final results from its Cauchari Lithium Brine Project in August this year. The results highlighted an intersection of lithium brines over 506 metres from 102 metres to a larger depth of 608 metres, the base of the hole.

The company released its quarterly results for the quarter ended 30th June 2019 in July this year. The company had a cash balance of $1.8 million as at the end of the quarter. The below table summarises the key financial metrics reported by the company:

LKE ended the trading session at $0.042, with a rise of 5 per cent relative to the last closed price. The stockâs market cap was recorded at $20.94 million, with approximately 968k shares in rotation. The stock has generated a substantial return of 900 per cent in the last five years.

Hawkstone Mining Limited (ASX: HWK) is an ASX listed company focused primarily on the development of a low -cost lithium project in America's battery corridor. The company owns 100 per cent interest in Lordsburg and Big Sandy Projects that are situated within the United States Battery Corridor. The company is rapidly de-risking the Big Sandy lithium project, and fast tracking towards a JORC Estimated Resource soon.

Hawkstone informed about a 15 per cent increase in the Exploration Target from the additional exploration for its Big Sandy sedimentary lithium project on 28th August 2019. The company also notified about the completion of the Phase 2 drill program that would help the company in estimating a maiden JORC compliant resource in Northern Mineralised Zone by the September end.

Hawkstone released its quarterly results for the quarter ended 30th June 2019 in July this year. The company had a cash balance of $2.02 million as at the end of the quarter. The below table summarises the key financial metrics reported by the company:

HWK ended the dayâs trade flat at $0.015 on 20th September 2019, with about 406k shares in rotation. The stock has delivered negative returns of 11.76 per cent and 25 per cent during the last six months and three months, respectively.

What is in store for Australian housing market in 2022?