Is Aussie Equity Market Under Threat Amidst Global Concerns?

The Australian equities market has performed fairly well in 2019 as the S&P/ASX 200 index has delivered a return of over 18 per cent so far this year. However, last year the index generated a negative yearly return of ~7 per cent at the end of 31st December 2018. 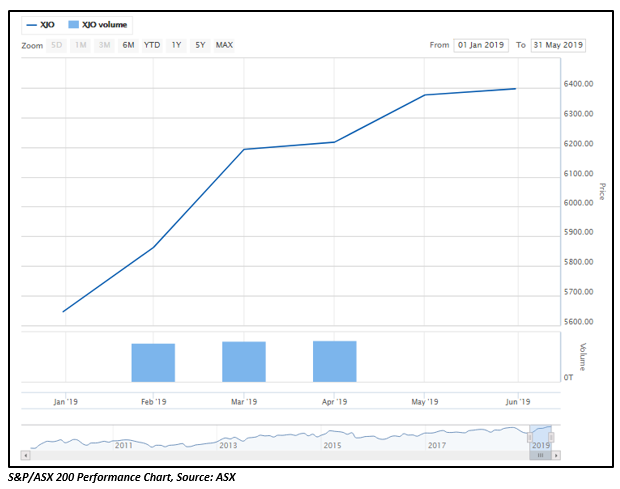 As indicated in the figure above, the S&P/ASX 200 index has witnessed a rising trend since the beginning of this year.

The Australian economy experienced several changes in 2019 that affected the equity market adversely. The most significant factor being the escalating trade tensions between the two largest economies of the world that raised concerns over the global economic growth. The trade conflict between the United States and China over the tariff rates impacted the economies worldwide. The dispute aggravated when the US President warned of increasing trade tariff on Chinese goods to 25 per cent. In response to which, China retaliated by announcing tariffs on US Goods worth $60 billion.

Besides this, the Australian economy was hit by the housing market slump in 2019. The house prices continued to fall, convincing the Reserve Bank of Australia to downgrade the dwelling investment and consumption forecasts. The other factors like weaker inflation and rising unemployment rate, also intensified the problems in the economy.

However, the Australian equity market managed to escape and performed well despite the worsening state of the economy. The outlook for the Australian housing market has been improved post the move taken by the Australian Prudential Regulation Authority to ease home loan rules by proposing the removal of the 7 per cent loan buffer. In order to support employment growth, the Reserve Bank of Australia reduced the interest rate to 1.25 per cent from 1.5 per cent.

Is ASX Under Threat?

Undoubtedly, the performance of the Australian equity market has been decent so far in 2019. However, some of the emerging global tensions may shake this trend ahead including the US-China conflict.

Market participants are also keenly eyeing the rising tensions between the US and Iran after Iran shot down the US drone, claiming that it violated its airspace. However, the US officials have denied Iran’s accusations, stating that the drone was flying in international airspace. Iran has also warned the US of shooting down other American spy drones, escalating the tensions. Retaliating to Iran’s move, the US President also approved military strikes against Iran but stepped back from launching them.

Last week, enforcement of additional sanctions was announced by US on Iran to inhibit it from getting nuclear weapons. The US has also planned for the mass deportation of undocumented immigrants in weeks ahead. In another move, the US has imposed new sanctions on Iran's Supreme Leader and eight other senior officials.

The ongoing week is very crucial for Iran as it intends to break the uranium stockpile limit imposed by the 2015 nuclear deal. Also, the G20 summit meet is expected to be held at the end of this week.

Some of the stocks listed on the Australian Stock Exchange have performed exceptionally well in 2019, generating a huge return on a YTD basis. Let us have a look at three of such stocks in some detail below:

Headquartered in Australia, Bubs Australia Limited (ASX: BUB) offers a range of premium infant nutrition products made in Australia. The company’s speciality is its organic baby food and infant formula fed during the child’s first 1,000 days of life. Bubs is also Australia’s leading producer of goat dairy products. The products of Bubs are being sold in major pharmacies and supermarkets across Australia. These products are also exported to South East Asia, the Middle East and China.

In May this year, Bubs formalised its three strategic partnerships with China-based Beingmate Baby & Child Food Co., Ltd, Alibaba’s Tmall and Chemist Warehouse. On the same day, the company also announced a partnership with Fonterra Australia for the production of first Australian made certified organic grass-fed infant formula.

The acquisition of Australia Deloraine Dairy Pty Limited was completed by the company in April 2019. Bubs also entered into an agreement with the Remarkable Milk Company Pty Ltd for the sale of certain assets acquired by Bubs in 2017 as part of its acquisition of NuLac Foods Pty Ltd.

The company reported strong financial results during March quarter 2019, driven by domestic Daigou Channel and infant formula sales to China. Bubs reported the highest ever monthly gross revenue of $6.91 million in March FY19. The company’s gross revenue was up by 103 per cent to $11.83 million in Q3 relative to the prior comparable period (pcp).

The figure below demonstrates the performance of Bubs in 1H19: 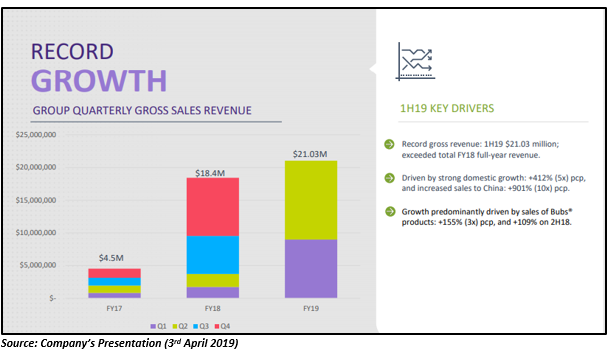 Founded in Perth in 2007, Nearmap Ltd (ASX: NEA) has developed from a small online startup to a company listed on S&P/ASX 200 Information Technology. The company is changing the landscape of aerial imagery radically in Australia, the US and New Zealand. It is a next-generation digital content provider, helping thousands of business users gain deep location-based insights.

On 6th June 2019, the company informed about the launch of its latest product, Nearmap 3D and a beta version of its Artificial Intelligence product. The Nearmap 3D, company’s latest launch, enabled consumers to export and stream 3D imagery on-demand using MapBrowser at a wide scale.

The company released its financial results for H1FY19 in February this year. The company declared that its annualised contract value (ACV) improved 42 per cent to $78.3 million in 12 months to 31st December 2018. The total revenue of the company was up 45 per cent to $35.5 million in 1H FY 19 relative to 1H FY18. 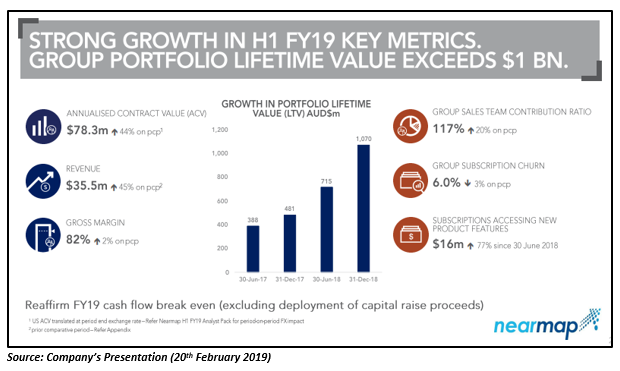 Founded in 1996, Appen Limited (ASX: APX) collects and labels text, image, speech, video and audio data. The company delivers high-quality, human- annotated data that is required to improve the world’s most innovative AI systems. The company has experience working in over 130 countries and expertise in more than 180 languages.

On 3rd April 2019, the company announced the completion of its acquisition of Figure Eight Technologies, Inc. The company informed about the acquisition in March for a total upfront consideration of US$175 million. The acquisition enabled the combination of Appen’s expertise with Figure Eight’s innovative data annotation platform.

The company published its financial results for the year ended 31 December 2018 in February 2019. The company reported a rise of 118.7 per cent in revenues from ordinary activities to ~$364 million relative to the previous period. The underlying EBITDA also witnessed a growth of 153 per cent to $71.3 million during the period. 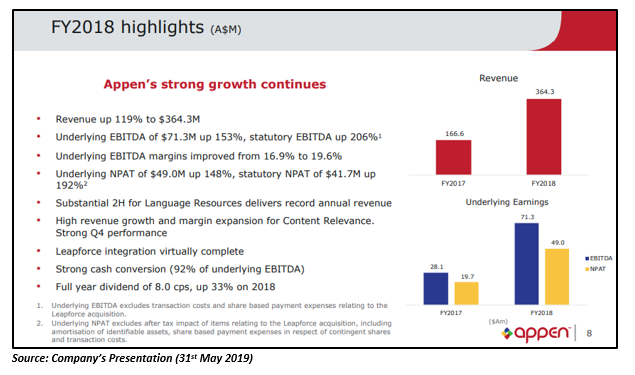