Iron ore prices jumped in a bullish stance again in the international market, post a correction amid a sharp decline in steel and iron ore inventories.

The most actively traded September series of iron ore futures on the Dalian Commodity Exchange rose to the level of RMB 782 (Day’s high on 13th June 2019) before settling at RMB 781.5 up by 1.55 per cent as compared to its previous close of RMB 769.5.

The rise in prices in the Chinese market was quickly followed by the uprise in the international market as well, and the most active trading June contract of iron ore futures on the Chicago Mercantile Exchange rose to the level of US$106.29 (closing price of 13th June).

Iron ore prices were supported by a shortfall in steel inventory in China. The inventories declined substantially and supported the steel prices in the domestic as well as international market.

The shortfall in the inventory occurred due to high Chinese consumption, which further demand steel outputs and created a demand rise. 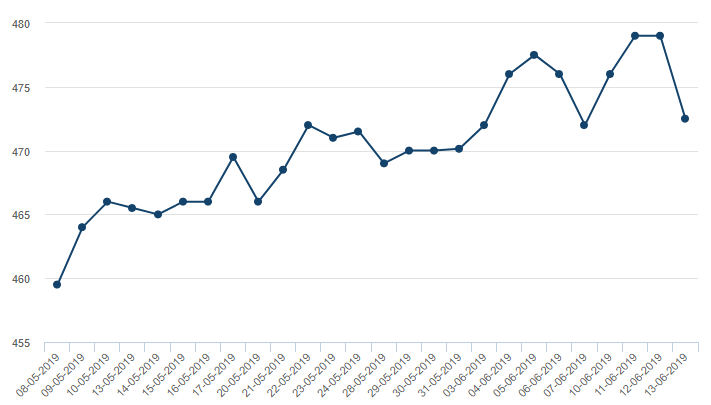 China as a price driver:

The steel inventory in China is expected to maintain the current downtrend as high consumption in China is quickly absorbing any build up in the domestic inventory. China’s emphasis on the infrastructure and housing despite the backdrop of the U.S-China trade war is creating a high steel demand in the domestic market.

Steel mills’ operative margins are currently high amid steel demand, which in turn, is prompting mills to procure more raw-material, and iron ore prices are expected to continue to derive its price from the higher steel mills operative margins. Investors should keep a close eye on infrastructure development in China, especially after a recent drop in shanty house development.

FMG shares rose significantly to touch a 52-week high over the high commodity price in the international market along with various other factors. The share price reached the day’s high of A$8.830 (as on 14th June), settling at A$8.800, up 5.4%.

FMG shares are on a continuous uptrend from the level of A$3.931 (low in December 2018) to the present level in June. High iron ore prices since December 2018 is one of the major factors which contributed significantly to FMG rally.

FMG on a Daily Chart:

On a daily chart, the share price actions have shown a golden cross (bullish signal) of 7 and 20-days exponential moving average (EMA). The prices are currently trading above 7,20,200-days EMAs. The shares are currently moving in an uptrend (yellow upward sloping line), and the price actions marked an uprise followed by a correction, which in turn, provides perfect points to connect (0,1,2) for Fibonacci series. The prices have recently broke the level of 61.8 per cent Fibonacci which is at A$8.745.

RIO on a Daily Chart:

On a daily chart, the share price has shown a golden cross of 20,50,200-days EMAs, marked on the chart shown above with an orange circle. Post giving a bullish signal the stock rose significantly and is approaching its previous 52-week high at A$107.990. The prices are currently taking hurdle of the 61.8 per cent level of the Fibonacci series which is at A$105.492. Fibonacci connection points are marked on the charts as 0,1,2.

BSL on a Daily Chart:

The share prices of the company are currently trading below the 20,50,200-days EMAs, which previously marked a death cross (bearish signal- orange circle). Post showing a bearish signa,l the shares of the company dropped. After dropping till the end of May, the stock recovered and broke its first resistance level of A$11.491 (yellow-horizontal line), which is now acting as a support along with the 20-days exponential moving average.

Apart from the steel and iron ore miners listed on the Australian Securities Exchange, many resources companies, which consider commodities price, also took a U-turn.

NST on a Daily Chart:

The share price actions marked a golden cross (bullish signal) of 7,20,200-days EMAs (orange circle) and rose substantially. During its fall the share price took a support from its supporting line, which is at A$7.846. NST shares are now approaching the 100 per cent level of the Fibonacci series.

ILU on a Daily Chart:

The shares of the company recently broke its resistance level of A$9.747 and rose to the present level. ILU shares are currently trading above 20,50,200-days EMAs, and the prices took a hurdle of 61.8 per cent Fibonacci series; however, the stock broke the 61.8 per cent level slightly.