Evidence exists to show that proportion of older Australians is growing in the country with a growing demand for retirement safety and financial needs. As per official stats by Australian Institute of Health and Welfare, over 1 in 7 people or 15% of the total population of 3.8 million Australians were aged 65 and above in the country in 2017, which is further expected to grow steadily over coming decades. Increasing life expectancy can be partly attributed to the growing proportion of the Australian ageing population. 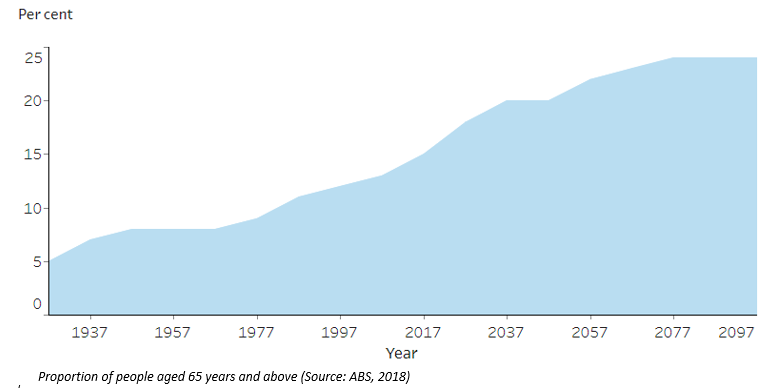 According to the government, 1 in 8 older Australians were employed in 2016. Further, data suggests that as on January 2018, people aged 65 years and above accounted for 13% of the country’s total workforce. Besides, 17% and 10% workforce participation were reported for men and women, respectively.

In Australia, retirees face savings challenges, as the market does not have many products that can offer them guaranteed income. Thus, annuities can be considered as the only guaranteed income product available to Australian retirees. Let us have a broader look at annuities.

An annuity is an insurance contract or policy, offered by financial institutions including investment companies and life insurance companies (regulated by APRA). Specifically designed for retirement, annuities guarantee a steady cash flow for retirees, in exchange of a lump sum payment or a series of regular payments made by the investor.

Examples of some of the companies offering annuities in Australia include:

Fixed Annuity: Under a fixed annuity, a guaranteed amount including principal investment and earnings is paid for a fixed term period.

Lifetime Annuity: Unlike fixed annuity, Lifetime annuity has no fixed term, offering payments for the entire life. Some exceptional annuities offer access to the capital early, if required.

Immediate Annuity: This type of annuity is purchased with a lump sum payment and is ideal for a person approaching his/her retirement age, as there is no accumulation phase and the investor starts receiving payments immediately after the initial investment.

Deferred Annuity: In this type of annuity, payments are made after a certain period.

Why people opt for annuities?

Annuities are preferred by the people, who consider these as their primary income source after retirement. They can be compared with other retirement income strategies like pension products, bank deposits or other investment strategies resulting in a fixed income. People prefer annuities, as they:

Major disadvantages of investing in annuities have been listed below:

In Australia, nearly 65% of elderly people depend on a government pension or allowance as their source income after retiring. Thus, Age Pension is an important income source for retirees in the country. An income test and an assets test determine the Age Pension in Australia. Any person opting for annuities can check with the Department of Human Services' Financial Information Service (FIS) regarding its impact on the Age Pension entitlement.

What an investor needs to know before opting for annuities?

In Australia, superannuation is an arrangement, under which the government encourages people to place a minimum percentage of their income during their working life         into a fund to ensure an income stream after their retirement. The superannuation fund invests money in shares, property and managed funds, etc. In 2016-17, nearly 65% of people aged 45 or above who had retired had made contributions to a superannuation scheme.

The Australian Institute of Superannuation Trustees (AIST) is the representative body for the profit-to-members superannuation sector worth A$1.3 trillion in Australia. The organisation plays a major role in policy development. AIST’s members include trustee directors, in addition to employees from industry, corporate and public-sector funds. AIST is the host of several industry conferences and events, along with the Conference of Major Superannuation Funds (CMSF).

In February 2019, reforms that were proposed in the budget for 2018 became law. The reforms are aimed at safeguarding the superannuation savings of Australians from erosion, owing to unsuitable fees and insurance premiums as well as cut unintended multiple low balance accounts, as it is a major issue for most of the Australians.

The reforms were introduced after a report found that approximately 10 million or one third of all superannuation accounts are unintended duplicate accounts and can erode member benefits by up to A$2.6 billion in unnecessary fees and insurance, annually.

The amendments will encourage the consolidation of multiple low-balance superannuation accounts. The reforms are estimated to proactively consolidate about 3 million accounts worth approximately A$6 billion, according to the organisation. The changes set to come into effect from 1st July 2019 are:

In order to ensure proper implementation of the reforms, the organisation is working closely with the Australian Prudential Regulation Authority and the Australian Tax Office.