The Race is On

Among the most sought-after market â China is witnessing increasing number of companies from ANZ region growing synergies with Chinese firms. This year has seen the proposed acquisition of Bellamyâs Australia Limited (ASX: BAL) by a Chinese company.

November 2019 has been very busy for Wattle Health Australia Limited and the company has updated the market with significant developments. Earlier this month, the company has notified about the collaboration agreement with Nouriz Fine Food Co Ltd, whose major shareholder is a China State-Owned Enterprise.

It is said that the partnership is set to form of a Joint Venture to produce, market Australian organic nutritional dairy products sourced from the Corio Bay Dairy Group into to China market.

A few days back, the company has reported that Dr Tony McKenna was nominated by the Board of the company to take over the role of Group Chief Executive Officer & Managing Director, starting from 1 February 2020. Mr Mckenna is the current CEO of Corio Bay Dairy Group (CBDG), having experience of over thirty years in Australia, New Zealand and internationally.

In implementing its organic strategy, the company has an exclusive supply of certified organic milk with its Joint Venture partners in CBDG â Organic Dairy Farmers of Australia (ODFA). Meanwhile, the construction of the countryâs first dedicated organic nutritional spray dryer is on track to complete in the first half of 2020.

To complement the commencement of operations in 1H 2020, the company has made two appointments. Mr Uday Joshi has joined as Technical Manager and Teguh Jodjaja as Development and Quality Manager.

Concurrently, the company has entered into agreements to acquire an additional 75% of Blend and Pack for an upfront consideration of USD 30 million and a deferred payment of USD 25 million.

The Share Purchase Agreements (SPA) were executed with Mason Financial Holdings to acquire 75% of Blend and Pack, increasing WHAâs stake to 80%. WHA has substituted the original agreement signed in July 2019 with the new one to reflect more favourable financing terms.

Under the new terms, the funding for completing the transaction does not relies on debt finance structure and include a deferred payment of USD 25 million over a five-year period through loan promissory note along with upfront payment of USD 30 million.

WHA is seeking to secure partial funding for the acquisition of Blend and Pack through a partially underwritten right issue to eligible shareholders of up to approximately 155.60 million shares.

It aims to raise a maximum of approximately $62.2 million prior costs with a minimum capital raise of $55 million via four new shares for every five shares held at the record date at an offer price of $0.40 per share.

WHA is conducting an Extra Ordinary General Meeting on 16 December 2019, allowing the shareholders to vote on the proposed acquisition of B&P, right issue or any shortfall offer associated with right issue.

Clover Corporation acts as a catalyst for products related to infant nutrition and others, including pharmaceuticals, dietary supplement, food and beverage, animal food, and clinical nutrition.

In addition, the technology is augmented with China regulatory compliant ingredients and over 18 years of proven global use within dry-blended infant and children formula products. 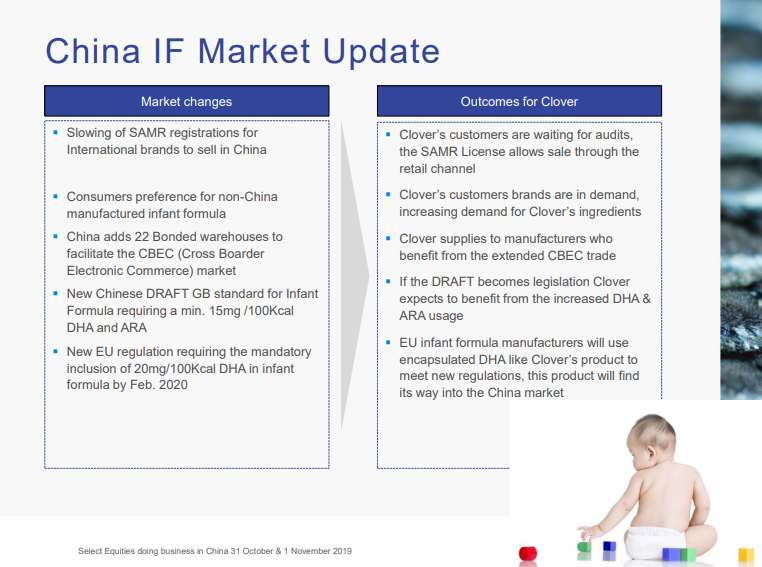 Cloverâs partnership in Melody Dairies, which would be owned by four partners with access to dryerâs capacity equivalent to their share of the business, is a separate company that is building and operating a nutritional spray dryer in Hamilton, New Zealand (NZ).

New Zealand-based, Synlait Milk have come a long way from purchasing its first farm in 2000 to clocking revenues of NZD $1 billion for the first time earlier this year at the year-end on 31 July 2019 (FY 2019).

In October this year, the company reported on the conditional purchase of Dairyworks for NZD 112 million. The transaction would allow the company to further move towards the delivery of its everyday dairy strategy.

Subject to Overseas Investment Office Approval, the Dairyworks transaction is also complementary to the recent acquisition of Tablot Forest â a cheese manufacturer.

In 2006, the founder of the company â Kristy Carr, decided to solve the problems she faced while raising her new-borns â the lack of premium organic baby food. Presently, the company is an ASX-listed entity and is the largest producer of goat milk products in Australia.

A master distribution agreement was executed with Viet Nam TVV Service and Trading Company Limited (TVV), which is one of the largest Vietnamese owned distributors in Vietnamâs infant nutrition industry, supplying to a large network of around 20,000 retail outlets.

It was mentioned that the infant nutritionals domestic market in the country is estimated to be worth $2.2 billion, having grown at an annual compound average growth rate of 7.7 per cent over the past five years.

Also, the infant nutritionals market includes the infant milk formula category, which is estimated to be valued at $1.8 billion. It is expected that the companyâs product would hit the stores in December 2019.

BUB said that a conservative revenue projection from the agreement is expected to be $1.5 million in the first year, and the contractual term is for two years that could be terminated in violation of minimum sales target.

CLICK HERE FOR YOUR FREE REPORT!
Tags:
ASX: BUB ASX: SM1 ASX: CLV ASX: WHA Bubs Australia Limited infant formula Synlait Milk Limited Infant Formula Stocks Clover Corporation Limited Wattle Health Australia Limited ASX-Listed Infant Formula Stocks health stock
All pictures are copyright to their respective owner(s).Kalkinemedia.com does not claim ownership of any of the pictures displayed on this website unless stated otherwise. Some of the images used on this website are taken from the web and are believed to be in public domain. We have used reasonable efforts to accredit the source (public domain/CC0 status) to where it was found and indicated it below the image.