The Reserve Bank of Australia has been walking a tight rope among dormant inflation and subdued wages growth and slower GDP growth. The wages growth which has seen an upward revision is a positive move for the revival of the economy, which witnessed a weaker GDP growth recently. With the pick-up in wages growth, consumption is expected to see a better growth which might lead the inflation to stabilize.

To understand the correlation, we are discussing various aspects of the economy:

Under the Fair Work Act, the Fair Work Commission’s Panel, conducted and completed the annual wage review for 2019-20. The expert panel on 30 May 2019, took decision to hike the national minimum wage by 3%. The order related to wage hike has come into operation on 01 July 2019. The new order will replace the National Minimum Wage Order 2018 till the next order from the panel under the respective Act arrives.

Wage Growth Scenario: The Australian economy has been feeling the pinch of low wages across most industries and regions in recent years. As per the Wage Price Index (WPI), this trend is quite visible across the three-key pay-setting methods in Australia: awards, individual agreements and collective or enterprise bargaining agreements (EBAs). 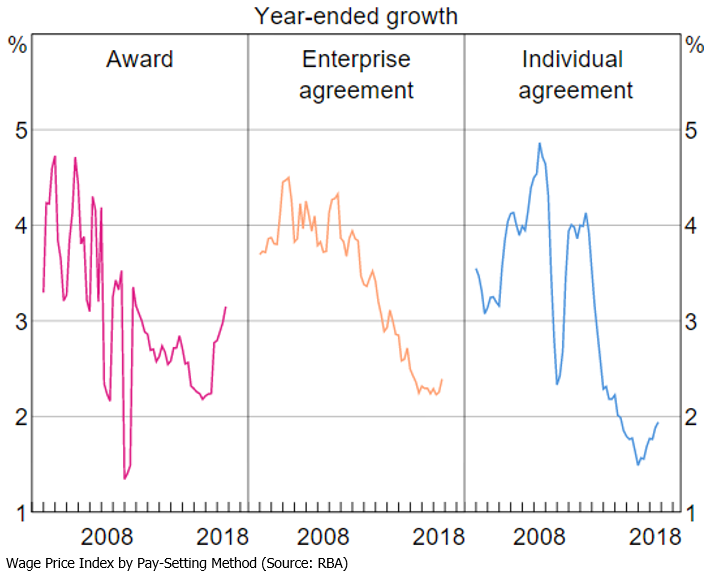 Wages across these 3 methods are driven by various dynamics which are associated with the assessment of outlook of wages growth. Majority of the award wages are decided by FWC (Fair Work Commission) and have risen higher as compared to the other pay setting methods, which is quite visible from the above graph. Wages under Individual agreement method tend to move with labour market conditions, whereas wages growth for Enterprise agreement changes with a lag due to the basic feature of agreement being for a long period.

Subdued Wages Growth Over Recent Years: Wage growth as measured by the Australian Bureau of Statistics (ABS) came in at an annual average of 2.2% in the 5-years to December 2018 as compared to the average annual growth of 3.3% in the corresponding period of five years to December 2013. The marked slowdown has been prevailed in the both private and public sector since March 2011. 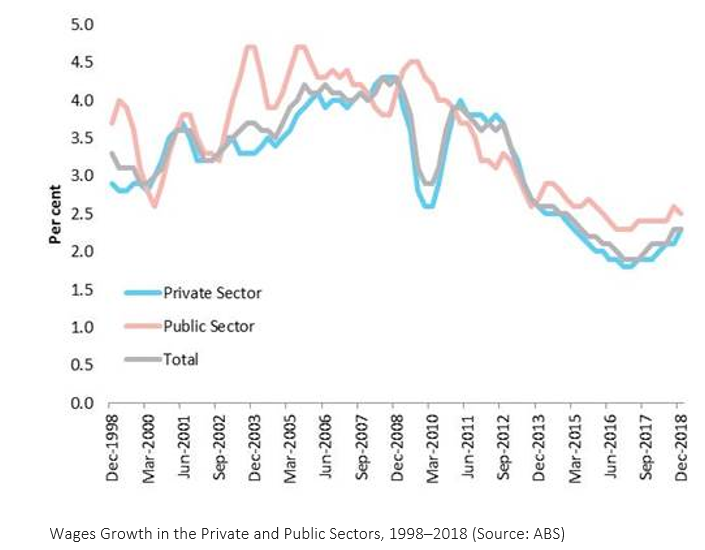 Sticky Inflation: With the nominal wage growth in the last few years has not signalled any significant change, the CPI (Consumer Price Index) also remained sluggish and dormant. Inflation, in terms of CPI, has grown at an annual average of 1.7% in the 5-years to December 2018, as compared to the average annual inflation rate of 2.6% cent in the corresponding period of five years to December 2013.

Wages Growth, Inflation and the Cash Rate Moving in the Same Direction: As we understand, one of the main functions of the RBA is to keep the inflation in the range of 2%-3% (on average), over the business cycle, and set interest rates in response to potential movements beyond this range. RBA set the target cash rate which has been 1.50% between September 2016 and March 2019. The cash rate at 1.50% is the lowest rate recorded since early 1990s when the rates were introduced. The current cash rate is also well below the historic long run average of around 4.90%. CPI Inflation also have remained in the range of 1.3% and 2.1% in the 4-years to December 2018 which is nearer to the lower end of the target band.

While comparatively low wages growth has contributed to the passive growth in the household income, it has also driven the extended duration of deep lower interest rates. The lower interest rates benefit the borrower, particularly the housing mortgage borrower. However, it is less profitable to the people who rely on interest accruing from savings deposits and investments.

Having mentioned the strong correlation among these three factors above, any significant and sustainable upward movement in the wages growth and inflation is likely to lead RBA to increase the interest rates. Any significant change in the interest rates might trigger a dampen in the household consumption expenditure as far as mortgage is concerned. 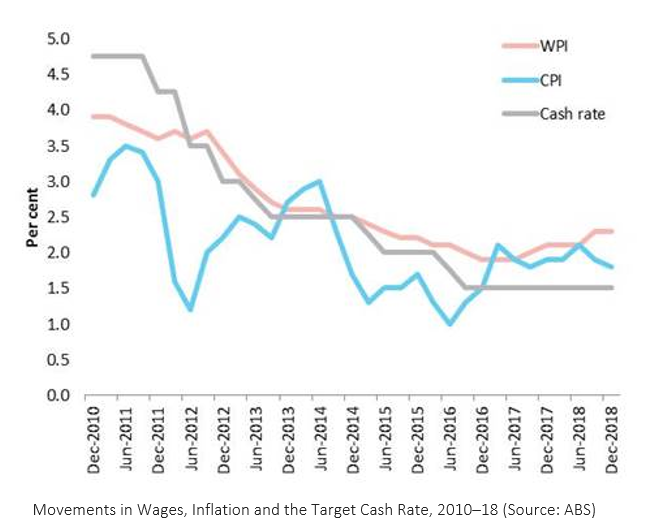 GDP Growth: Australian economy has seen a weaker GDP growth over 2018 than expected. Some of the key drivers towards the deceleration of growth in the Australian economy over the 2nd half of 2018, are mining activity, weak consumption and dwelling investment and so forth. Factors such as sluggish wages growth, stubborn lower inflation and others have led to further downward revisions to the outlook for GDP growth and inflation. The RBA expects GDP growth to be approximately 2¾ % over the period between 2019 and 2020. Underlying inflation is projected to witness an increase to 2% during the early part of 2020 and is expected to rise a bit further by mid of 2021. 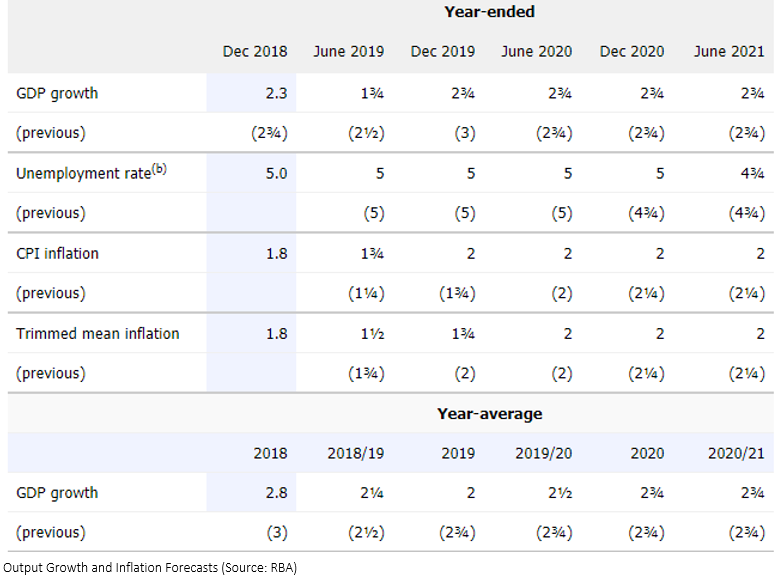 Despite the improved labour market in the second half of 2018, consumption growth was feeble during the period. The further feeble period, on consumption front is likely to prevail due to softer household disposable income growth seen in the last few periods, and sluggish housing market scenario. The consumption growth is expected to be ~2% in 2019 and 2¾ % by mid-2021.

Dwelling investment is also expected to witness a declining trend in the upcoming years. The pipeline of undergoing work on higher-density housing comprises a large amount which is likely to support activity in the near-term. However, going forward, the growth in the business investments is likely to be continued to back the economy in the upcoming years. Public demand growth flaunted a decent growth, which was above the expectation over 2018. Going forward, public demand is also likely to continue providing strength to the economy with the easing growth rate over the forecasted years. Public investment is forecasted to stay resilient for the coming periods, largely backed by the substantial pipeline of infrastructure projects. The rollout of the National Disability Insurance Scheme has well backed the public consumption growth. The scheme is scheduled to be ended by mid-2020.

With the above elaborated facts and figures, though the Wages rates has been revised upward, the fact to understand is the transferability and transmission of this hike towards the economy. Will this wage hike support the inflation to move, or GDP growth to attain the desired level? Can we expect a revival in the consumption story? It will be pre-mature to answer any of these questions. However, the move is positive, and the quantum of the impact will be seen in the due course.