The drug development process starts from drug discovery and ends at the launch of the new pharmaceutical product in the market. The process includes drug discovery and development, preclinical trials, clinical trials, regulatory approvals and market safety monitoring. Before starting preclinical trials, researchers conduct experiments to identify and collect information of new compounds such as absorption, distribution, metabolism, excretion (ADME), potential benefits and its mode of action (MOA), adverse or side effects of drug, dosage and route of administration.

Next step of drug development is preclinical trials, and these trials are conducted in animals and microorganisms. In preclinical trials, the toxicity of the compound is evaluated. Once the drug passes trials in animals, it is studied in humans in clinical trials. Drug developers or the sponsors submit an investigational new drug (IND) application to the regulatory agency, for instance the Food and Drug Administration, before beginning clinical research. After the successful completion of a clinical trial of the drug, the FDA reviews report of the problems or side effects with prescription or over the counter (OTC) drugs and determine the cautions to dosage information and for other serious issues.

The process from drug discovery to the marketing of a drug is lengthy and very expensive. The estimated range from leading health care companies is in between $1.2 billion and $1.8 billion for one new drug approval with the risk that many targets do not meet the requirements and fail somewhere along the extensive process. However, some small health care companies have been successful with smaller investment of approximately $500 million. The average time to launch a successful pharmaceutical drug in the market is around 12-15 years.

Australian headquartered health care company, Neuren Pharmaceuticals Limited (ASX: NEU) is into the development of new treatment for neurodevelopmental disorders with high unmet need. The lead drug compound of NEU is trofinetide, which is in clinical trial phase III for Rett syndrome and has completed the Fragile X syndrome phase II clinical trial program. NEU has received Fast Track designation from the Food and Drug Administration (FDA) for the programs in these two syndromes. The company has given an exclusive license to ACADIA Pharmaceuticals for trofinetide development and commercialisation in North America.

Commencement of Phase III Trial of trofinetide in Rett Syndrome

In a recent ASX announcement, the company unveiled that its licensee ACADIA Pharmaceuticals has started the phase III clinical trial of trofinetide in Rett syndrome in the United States. The cost of phase III trial and other developmental is being funded by ACADIA Pharma, and Neuren has full access to all data for use to commercialise outside North America without any cost.

A clinical-stage biopharmaceutical company, Telix Pharmaceuticals Limited (ASX:TLX) is headquartered in Melbourne, Australia. It is engaged in developing drug molecules for unmet medical need in oncology particularly for kidney, prostate and brain cancer. TLX, which has operations in Japan, Belgium and the United States, is involved in diagnostic and therapeutic product development. The company uses the Molecularly Targeted Radiation (MTR) technology.

Collaboration between Telix Pharmaceuticals and AusHealth

As per an ASX update, the company and AusHealth have signed a technology licensing agreement and entered into a partnership for APOMABÂ®, a novel MTR platform for the treatment of lung and ovarian cancers. TLX and AusHealth will invest $30k (each) to fund the clinical proof of concept and on successful and commercial development of MTR technology, Telix will pay ~ $30 million in future milestone. 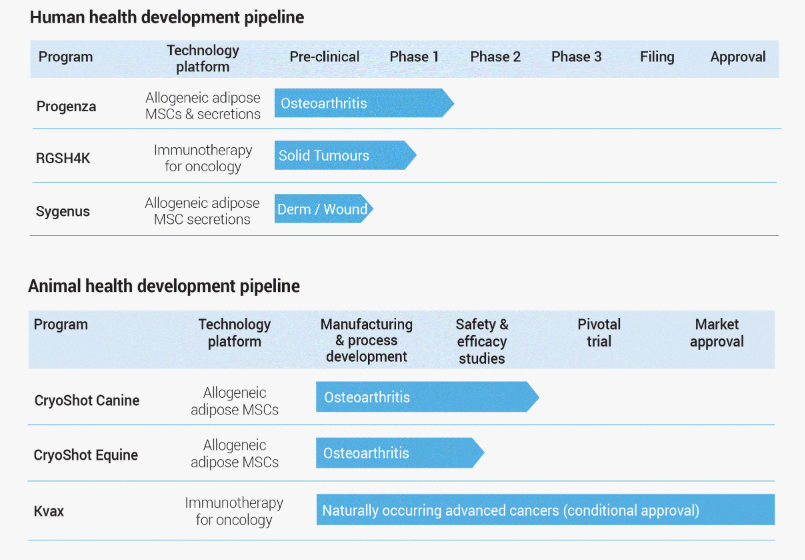 In the upcoming financial year, the company would focus on completion of phase II trial and commercialise Progenza for treating osteoarthritis. Regeneus aims to launch a product in Japan in 2023.

Sydney-based health care sector player, Biotron Limited (ASX: BIT) is engaged in R&D and commercialisation of various antiviral drugs for diseases with an unmet medical need. The company is due to conduct an annual general meeting on 26 November 2019 in Sydney, Australia.

Biotronâs lead compound BIT225 is in the mid-stage of its clinical trial for the treatment of HIV and hepatitis.