How Would the Coal Demand Dilemma Shape the Australian Coal Industry Ahead?

The coal industry is currently facing a dilemma over global demand dynamics. While countries such as the United States and Germany are phasing out coal-powered electricity generation, some economies such as Japan, China and India are relying substantially on coal-fired power generation.

The nation is decommissioning its coal-fired power plants as the plants are reaching retirement. As per the data, the companies in the United States announced the departure of over 546 coal-fired power units between 2010 to the first quarter of the year 2019.

These 546 coal-powered plants accounted for approx. 102 gigawatts of generating capacity, as per the U.S. Energy Information Administration (or EIA). The power plants in the United States intend to knock out 17 gigawatts of coal-fired capacity by 2025.

The decision to retire the coal-fired power is mainly due to the high competition provided by other energy generation plants, that run on either natural gas or renewables. As per the data, the plant owners in the United States retired over 13 gigawatts of coal-fired generation in 2018, which is almost near to the all-time high coal-fired retirement of 15 gigawatts in 2015.

However, post-2015, the coal-fired power plants have witnessed an early retirement along with high production capacity. 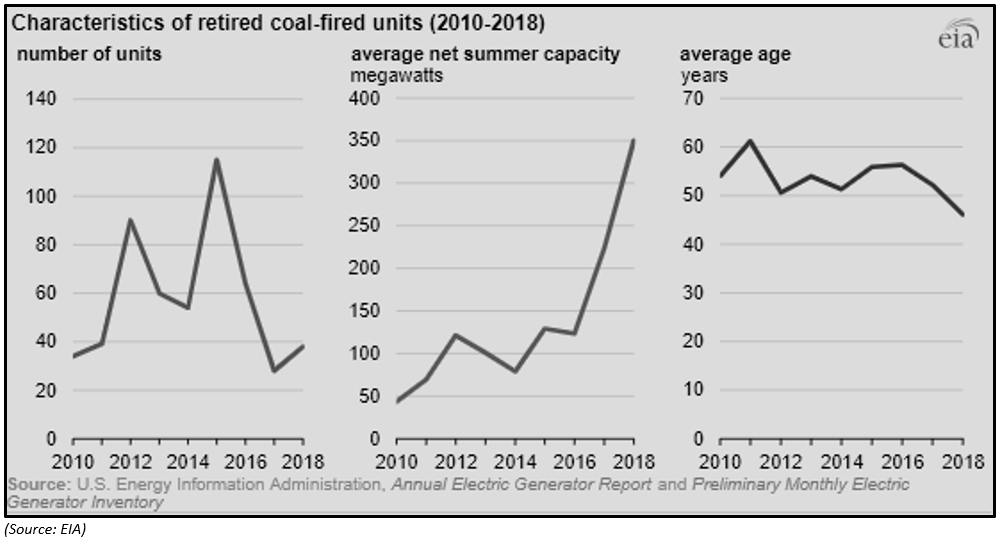 The increased stance to curb the carbon emissions along with the increase in the share of energy generation from different fossil fuels such as crude oil, Natural gas, and renewables have exerted significant pressure on coal usage in the energy sector, which in turn, has caused an early retirement of coal-fired power station in the United States.

While the coal-fired power units in the United States have witnessed a decline in numbers and the average age of retirement, which in turn, reduced the coal usage in the country, Japan has emerged as the world’s third-largest coal importer.

Japan imported over 210 million short tons of coal in 2018, which in turn, made the country the world’s third-largest coal importer. As per the statistics from the EIA, Japan supports approx. 33.33 per cent of its electricity generation and steel production through steam and metallurgical coal, respectively.

Such high imports make Japan a key market for Australian coal, and Japan relies heavily on high-grade coal for its power generation. The country produced about 317 billion kilowatts of electricity from more than 90 coal-fired power plants in 2018. 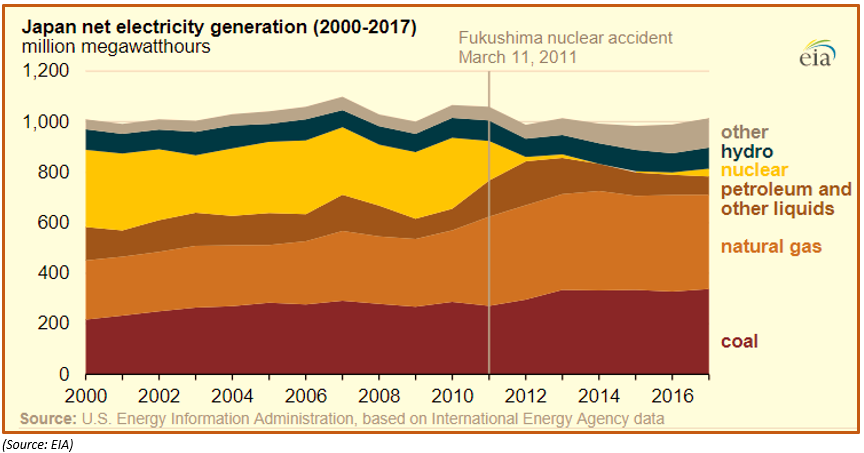 Japan’s Ministry of Economy, Trade and Industry (or MET) projects that coal-fired power generation would account for 26 per cent of total electricity generation by 2030, while nuclear, renewables and natural gas would capture 20-22 per cent, 22-24 per cent, and 27 per cent share respectively of the power generation by 2030. The 20-22 per cent nuclear energy could also support the Australian resource industry as Australia supplies a significant piece of Uranium to power the nuclear stations.

As per the EIA, Japan is planning to construct a 20-gigawatt coal-fired power plant over the next decade; however, the development of the plant would depend upon the number of suspended nuclear reactors.

China and India are supporting the coal consumption; however, local policies of China that impose a high restriction on coal import places a disadvantage over the international and especially over the Australian coal industry, as China remains a crucial importer of the Australian coal supply.

However, in the status quo, the coal miners in Australia, in the potential absence of stimulus from China are actively diverting their coal production towards Japan, where the nation is consuming the high coal supply. The lack of any substantial coal production in the local market, the high demand for coal in Japan is providing cushion to the coal industry.

The particular issues over coal mining, such as the negative impact of the surrounding areas coupled with the occupational hazards, remain a crucial problem for the coal industry. Over such issues, many states or nations have put strict curbs over the mining activities, which, in turn, poses a great challenge for coal miners.

CLICK HERE FOR YOUR FREE REPORT!
Tags:
Mining coal fossil fuel
All pictures are copyright to their respective owner(s).Kalkinemedia.com does not claim ownership of any of the pictures displayed on this website unless stated otherwise. Some of the images used on this website are taken from the web and are believed to be in public domain. We have used reasonable efforts to accredit the source (public domain/CC0 status) to where it was found and indicated it below the image.