How To Identify Growth Stocks? A look at BRN, BTH

Growth stocks are the companies that can report earnings and sales at a faster rate compared to an average company. Some of the growth companies tend to pay lesser dividends as the company reinvests the revenues for the future growth of the company. They have higher P/E ratios as the investors establish good valuation of them in anticipation of huge growth of the company for future. Further, it has been experienced that growth stocks have performed good during the bull run in markets on the back of rise in the companies’ earnings.

Growth stocks give higher returns due to competition edge they have due to product, technology and so forth, as well as taking up major risks, technological upgradation, expansions, mergers & acquisitions.

Both the stocks BRN & BTH are amid losses; however, they are rapidly reducing the losses to turn into profitable entities.

Let’s gain an insight on their latest updates

BRN for the first half of 2019 closed 30 June this year has reported 49 percent loss for the period attributable to members standing at US$4,493,568 compared to US$8,770,180 in the previous corresponding period last year.

The company’s topline (from continuing operations) has also fallen by 87% during the first half of 2019 to US$66,635 compared to the US$505,001 in the same period a year ago. This decline in the topline is on the back of revenues recognised in the previous period from the GPI agreement.

Further, R&D expenses has risen on the back of rise in the number of employees, increase in third party fees as the company made the first payment under the SNA contract of US$100,000, and also due to the outsourcing of manpower. S&M expenses fell during the period on the back of reduction in the S&M headcount and the related expenditures till this expenditure incurred on a more advanced stage of the development of Akida meant for AI Edge applications and Edge Learning. 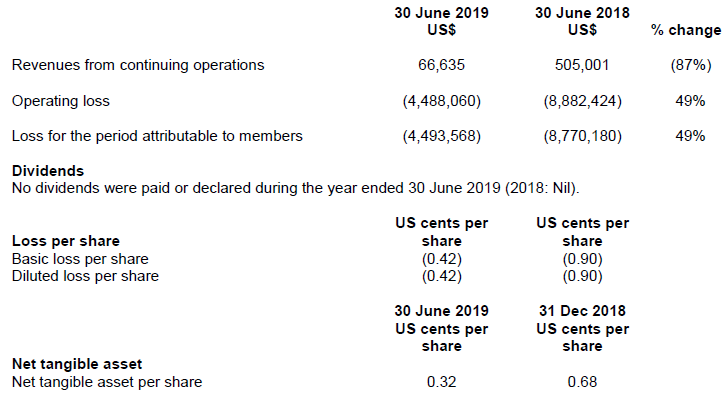 Bigtincan Holdings Ltd (ASX: BTH) is a leading software company that provides platform for software as a service (SaaS) application. The company offers enterprise mobility software that helps the sales and service companies to raise their sales win rates, decrease their expenses, and increase the customer satisfaction.

BTH is amid acquiring Xinnovation, Inc. (XINN), which is the next generation of technology for document automation & workflow platform. XINN will provide BTH the sales enablement platform that will be used for the transformation of the financial service firms and will offer high margin recurring revenue from the software usage in the form of annual subscription fee.

The transaction is expected to add approximately $3m in the form of Annualised Recurring Revenue (ARR) to BTH via 15 major customers, that includes Prudential, Mass Mutual, John Hancock and State Street Global Advisors. This will bring ARR of $27.8 million for FY 20, including FY19 ARR of $23.4m along with acquisitions of Veelo (~1m), Asdeq (~0.4m), XINN (~3m). The company is acquiring XINN for the total consideration of $12 million, which will be funded through existing cash reserves & raising of fund.

The company has already raised $20 million through institutional placement of shares, by issuing approximately 37 million new shares at the issue price of $0.54 per share. Bigtincan will use this fund for funding the acquisition of XINN, other acquisitions, their integration and working capital requirements.

Moreover, the company has bagged three years contract from a leader in global sports apparel retailer of the total value of $2.8 million. Additionally, the company for FY 20 expects the revenue to grow in the range of 30% to 40% organically. For FY 19, the company has reported 52% increase in the ARR to $23.4 million, 51% growth in the revenue to $19.9 million, reduced loss by $4.1 million and increased its gross profit by 60% to $17.5 million.

The company notified on its shares placed in trading halt on 26 September 2019, pending a release of an announcement with respect to the raising of fund. However, it resumed trading from 30 September 2019 after the announcement was made to the market.