Australia has been gripped with an extensive bushfire crisis for months, which is causing considerable loss of property, land and life across the country.

Bushfires, triggered by climate change, have killed over 15 people and injured more than 1,500 houses since September this year, particularly in Victoria and New South Wales (NSW). Moreover, a dense smoke has covered the country’s major cities, like Melbourne and Sydney, like a blanket.

The worsening situation has compelled the local authorities in NSW and Victoria to conduct road closures and forced evacuations across the city areas. The mass evacuation of communities in these cities is one of the largest ever emergency movements of Australian residents. People have been urged to leave the affected areas before the return of dangerous and extreme weather conditions.

In addition to impacting the lives and property in Australia, the bushfire crisis has also affected or is likely to have an impact on the businesses of ASX-listed companies. Let us take a look at three such companies listed on the ASX below:

The farms of the Company are located in prime growing locations in Tasmania, South Australia and New South Wales.

Vitalharvest has recently notified that the recent bushfires burning in southern NSW affected the Tumbarumba berry farm on 1st January 2020, which accounts for about 6 per cent of the Company’s berry plantings.

The bushfire has also damaged the assets owned by the Company’s tenant Costa Group, including several vehicles and the packing equipment. A full site evacuation has already been conducted by Costa Group before the effect from the fire front.

The Company added that a full assessment of the damage will not be undertaken until access to the property is available and the region is safe.

Vitalharvest and Costa Group will work together to evaluate the damage and deliver further updates when needed.

Besides bushfires, some other climatic conditions and weather changes have also impacted the Company’s operations in the last two months.

To manage the water requirements, Costa Group decided to secure extra water from nearby sources, remove a significant portion of the existing annual raspberry crop and prune some of the lower value blueberry varieties early to conserve the priority crop.

Prior to facing water supply challenges, Vitalharvest’s Yandilla and Kangara properties were slightly affected by a hailstorm event in early November 2019, that impacted the Riverland region of South Australia. The Company informed that two thirds of these properties sustained little or no impact due to the weather event.

VTH closed the trading session at $0.770 on 3rd January 2019, with a rise of 1.32 per cent relative to the last closed price. To date, the Company’s stock has delivered a negative return of about 7.31 per cent since September 2019.

To deal with the aggravated bushfires, the need for effective water supply has increased considerably in the Australian states. Water services company, Duxton Water Limited (ASX: D2O) is well-positioned to tap this remarkable opportunity emerging from the bushfire crisis.

In the current situation of bushfire crisis, companies like Duxton are likely to generate larger returns by capitalising on the rising demand for water services.

As the country is getting blanketed by a smoky haze, Australians are preparing themselves financially for the worse-case scenarios by taking bushfire insurance. 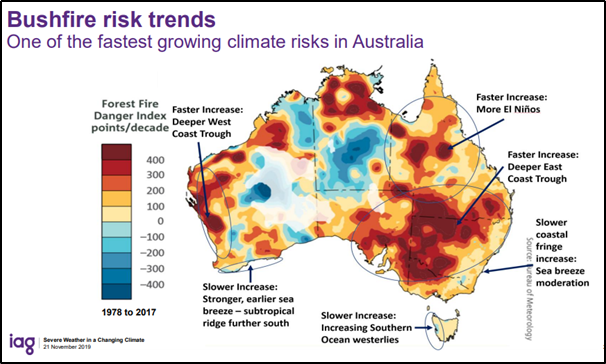 The Company has anticipated its net natural peril claim costs for the six months ending 31st December 2019 to be about $400 million post-quota share, relative to a corresponding perils allowance of $320 million.

The perils estimate for the half-year includes three continuing bushfire events capped by reinsurance recoveries under the total cover, subsequent to the complete erosion of the related deductible.

The Company expects the overall bushfire events to contribute more than $160 million of net claim costs in 1H20, post-quota share.

In addition, the Company has also increased its gross reinsurance protection to up to $10 billion for the 2020 calendar year, relative to $9 billion in 2019.

IAG closed the trading session at $7.61 on 3rd January 2019, with a rise of 0.4 per cent relative to the last closed price. The stock has delivered a negative return of about 3.32 per cent on a YTD basis.

It is worth noting that though the bushfire crisis has disrupted the operations of several Australian companies, it has brought opportunities for some firms. But undoubtedly, one cannot ignore the devastating effect of bushfire on different Australian sectors.