Did you know that the 6th largest country in the world, Australia has the second-highest human development index, only after Norway? The pace and potential this land, with over 10,000 beaches bears is massive. The country is best known as one of the most proficient agricultural, mining and energy producers, which has one of the world’s most open and varied economies with an educated workforce and an extensive services sector.

With evolving times and growth of economies across the world, Australia has done fair justice in maintaining its position as a lucrative competitive, growing and rich country in economic and business ideologies. 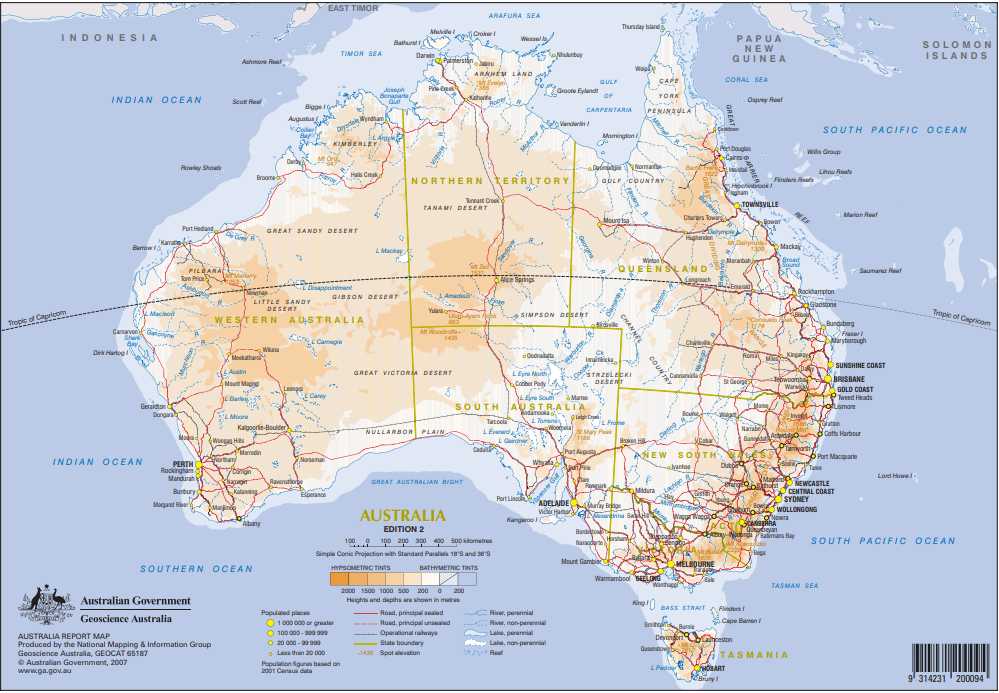 The mixed-market economy of Australia recorded a GDP of A$1.69 trillion in 2017, and a maintained strong growth in the first half of 2018, driven primarily by domestic demand. As per the International Monetary Fund, the current 2019 Projected Real GDP change for Australia would be 2.1 per cent. However, the economic activities witnessed a slowdown in the third quarter of 2018. These economic and financial vulnerabilities arose due to the high household debt issue being faced by the country, which is expected to elevate in the coming times as well; the house pricing correction is the need of the hour. On a positive note, however, the Aussie banks have sustained well, and the country’s financial system resilience has strengthened over time. The banks have depicted an increase in their capital levels and are less dependant on wholesale funding. 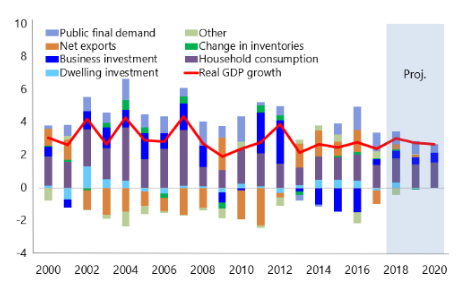 Market experts believe that the Australian economy’s growth has been 1.8 per cent, contributed largely by the government spending, YTD till March 2019. This is the weakest growth witnessed by the country since the conclusion of the financial crisis of 2009. The softness of the household consumption, which means fall in the housing prices, the trade war effect and the erratic rate-cuts have together contributed to this doldrum in the Aussie economy in the current times.

As a comforting prospect and breaking in the clouds, the IMF believes that Australia would realise an average annual real GDP growth of 2.8 per cent between 2019 and 2023, and this anticipation is the highest forecast when it comes to other major advanced economies. The country maintains a record of being the only economy that has a period of uninterrupted economic growth over the past 27 years.

A stock market, interchangeably referred to as an equity market or a share market, refers to a network of buyers and sellers who involve themselves in the economic transactions of shares or stocks. The market is not a physical entity, per say, and includes listed companies, the shares of which an investor can invest in. The size of the world’s stock market was recorded at ~$79.225 trillion in 2017. The largest markets by country were the US (New York Stock Exchange), Japan (Tokyo Stock Exchange) and the UK (London Stock Exchange), in the same order.

The Australian Securities Exchange (ASX) is Australia's main exchange market and is owned by the Australian Securities Exchange Ltd. It can be spoken of as a clearing house, market operator and payments system facilitator. ASX is counted amongst the world’s top 16 exchange groups that are listed and bears an average turnover of ~A$4.685 billion and a market capitalisation of A$1.9 trillion.

The Australian Securities and Investments Commission has the onus to supervise real-time trading on the country’s domestic licensed financial markets and take care of matter related to the conduct by participants on those markets. ASIC administers the ASX compliances and also keeps a check on the ASX operating rules and the listing rules.

The Australian Stock Market over the past years:

Over the past years, the share market in Australia has witnessed an increase in the size relative to its economy and is the country’s most significant financial markets. Most of the renowned companies, major resource institutions and banks are listed on the ASX and contribute towards the country’s output and employment.

At the conclusion of 2018 period, the total capitalisation of listed entities trading on ASX had almost touched the mark of $2 trillion. An estimated $5 billion in shares are traded on a daily basis in the market. 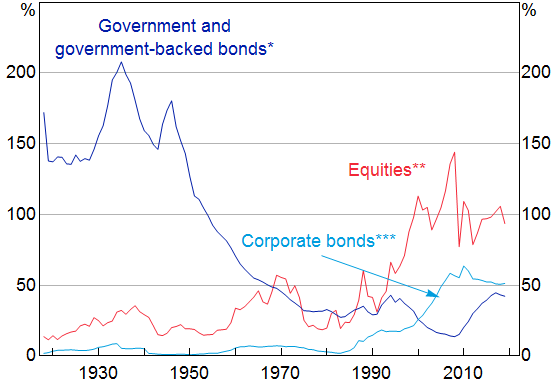 When it comes to the shareholders return, the Aussie share prices have rose by almost 6 per cent each year over the last century or 2 per cent, post accounting the phases of inflation. Sectors have faced their phases of both overperformance and underperformance. Interestingly, dividends on Australian equities are comparatively higher than in numerous other nations due in part to the way tax is treated. The total nominal return on equities has been approximately 10 per cent per year over the past century. Post inflation, this was about 6 per cent. 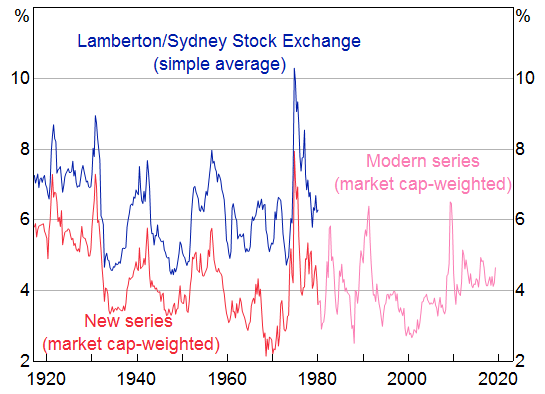 The ASX has not witnessed any drastic change in its composition of the listed equities over the years. The financial corporations, in particular the banks and the miners, acknowledging the rich mining potential of the country, account for almost 50 per cent of the market by market capitalisation. The resources sector alone accounts for almost 20 per cent of the market with respect to the market capitalisation. Other significant sectors include the manufacturing, infrastructure companies and so forth. 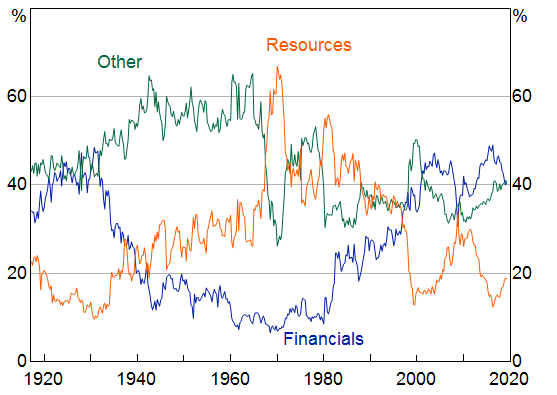 The highest that the Australian Stock Market has been:

The Australian stock market has the S&P/ASX 200 index, which is calculated on the concepts of market-capitalization weighted parameters and the float-adjusted stock market index.

The market surged to an 11-year high, driven by the ascend of the health and tech stocks in April 2019. In the last week of April, the Australian benchmark S&P/ASX200 index surged up by 67.6 and stood at 6,387.0 points. These highs had been previously recorded in January 2008, only prior to the global financial crisis.

These records are like a breath of fresh air amid the grim status of the alarming fundamental factors that have not been performing too well in the Aussie economy, like the ongoing trade and tariff tensions and the domestic housing weakness.

Amid all the advances being made in the economies and the technological advancement creeping in at a fast pace, it would be interesting to watch the Aussie share market undergo its share of ups and down, while investing picks up its course, with more people moving towards it to manage and make money via this platform.