As an economically sensitive sector, Retail sector companies are likely to have constructive implications when central banks around the globe are taking accommodative and easing stance in a bid to restore prosperity to economic growth.

One thing we should note here is that economic data reflects the past and not the actual present state of an economy at the given point of time.

Three rate cuts, but where is the impact?

Policy measures are designed to tackle a specific problem, and some measures introduced by policymakers tend to have lag periods.

Broadly, these lags are categorised into four sub-lags, which includes response lag, decision lag, implementation lag, and effectiveness lag. Presently, it is the fifth month running after the RBA lowered the cash rate for the first time.

We have seen some pickup in the housing sector that had been down for years, however, the influence on other industries that could be positively impacted by housing sales is yet to be seen, as suggested by the latest retail trade data by ABS.

The data suggested that the trend estimate for retail turnover in hardware, building and garden supplies was flat in September 2019. Similarly, the retail turnover in furniture, floor coverings, houseware and textile goods was down 0.1 per cent.

In September 2019, on seasonally adjusted terms, the retail turnover for hardware, building and garden supplies was down 0.7 per cent, while furniture, floor coverings, houseware and textile goods were up 0.1 per cent.

Although, it depends upon the structure of economy, uncertainties, dynamic nature of conditions which impact the lag timing of policy measures. However, some estimations indicate that monetary policy actions could take around one to two years to have its maximum effect.

Have you seen any person clapping with one hand? Well, it is impossible!

We had seen one fiscal response by the Commonwealth Government in July this year already. The Australian government, having introduced $158 billion in tax cuts, have more reasons to worry about the diving economic outlook in the country.

In layman terms, the July legalisation was to benefit over ten million Australians for a tax cut of up to $1,080.

Intriguingly, the experts in the economic circles of the country have voiced out opinions to bring forward the tax cuts plans of 2022 to 2020. And, this development had added some gains in the Westpac – MI Consumer Sentiment Index for the November issue.

The government’s $158 billion tax cuts are designed for a seven-year period. Lately, the media has widely reported on the proposal by the economists in the country to bring the scheduled 2022 cuts to 2020.

In a setting, where Governor of RBA is not quite convinced enough about the positive ramifications of the rate cuts on the economic outlook, it appears quite significant to rely on fiscal policy in delivering the ultimatum.

Moreover, we would be needing effective monetary as well as fiscal measures to come out of the sluggish consumer behaviour, and other economic woes. 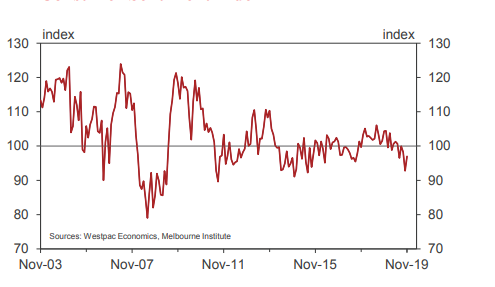 Earlier this month, the Australian Bureau of Statistics (ABS) had released the economic data on Retail Trade for September 2019.

On seasonally adjusted terms, Australian retail turnover rose 0.2 per cent in September 2019, lower from a 0.4 per cent pick up in August 2019.

In current prices, the trend estimate for the retail turnover in the country grew 0.2 per cent in September 2019, consistent with a 0.2 per cent rise in August and July 2019.

During September quarter, the states that recorded declines in volume terms on a seasonally adjusted estimate included - South Australia down 0.9 per cent, Northern Territory down 0.5 per cent, Queensland down 0.2 per cent and New South Wales down 0.2 per cent.

And the states with gain included - Western Australian up 1 per cent, Tasmania up 0.8 per cent, and the Australian Capital Territory up 0.3%.

At the outset, the monetary policy outcome has not depicted some highly optimistic signs presently. However, it is the known fact that the policy measures take time to deliver the expected outcome.

The pick-up in the housing market suggest that rate cuts and tax cuts might have had an impact on dwelling sales, among other measures. It is also noticeable that the widespread effects are yet to be seen, which would help to revive the sluggish economic growth.

In addition, other critical factors such as unemployment, wage growth, average working hours would need to be improved to sustain some normalcy in the retail sector. Only monetary policy interventions are highly unlikely to bring the desired outcomes, and fiscal policy measures are also extremely desirable at this point of time.

Investors should consider their investment thesis behind particular investments. And, green shoots are likely to follow in the retail sector. Afterall, the housing pick-up also mean additional need of new furniture, electronic equipment and whatnot.