The uncertainties in almost every aspect of human life are uninvited guests for which not everyone is prepared. Similarly, many investors put their hard-earned money into risk carrying investment vehicles without having the knowledge of the available insurance against those risks.

Yes, you read it right, insurance to your investment.

Hedging is the act of making an investment with a view to minimising the risk of unfavourable market conditions and mitigating the effect on the investment portfolio. It is a common notion that every investor should know about hedging and hedge investments since hedging is seen as insurance for your investmentsâ adverse situations. As we move further, along with learning about hedge funds, its benefits and risks, we shall be exploring hedge funds market in Australia, some of the leading funds in Australia, and what should you be aware of as an investor? 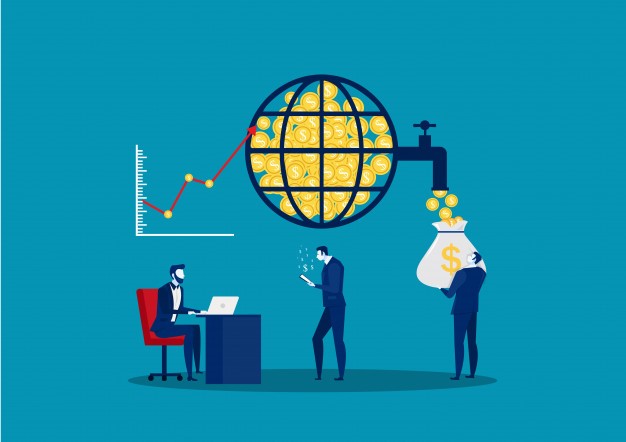 Before learning theoretically about hedge funds, letâs focus on some numbers about Hedge Funds in the Australian financial industry.

According to Austrade, the global significance of Australiaâs financial markets and sophistication of its managed funds industry reflects the countryâs strengths in having the worldâs:

Australiaâs $2.8 trillion investment management industry is the biggest one in Asia, representing a CAGR of 10% since the year 1991. Australiaâs FUM or funds under management are 60% bigger compared to the market cap of the whole nationâs equity market ($1,760 bn noted in December 2016) and signify ~168% of the nationâs nominal GDP ($1,693 bn). 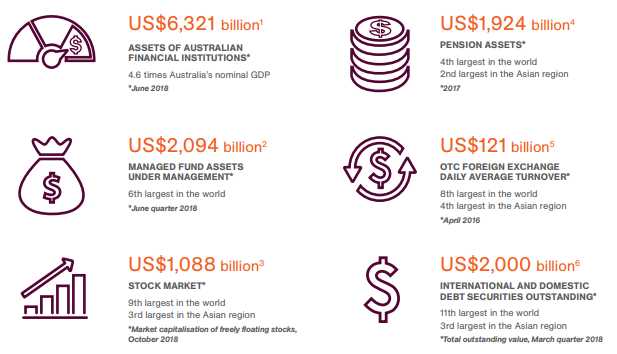 More interestingly, Australiaâs mature financial services sector had estimated assets of around $8.5 trillion (USD 6.3 trillion), which are more than 4.5x the countryâs nominal GDP as at June 2018.

On average, the sector has witnessed a growth of 9.4% a year, which is well above the average nominal GDP growth rate of 5.9% over the past two decades. The strength of the financial services industry reflects on its share as the largest contributor towards the Australiaâs gross value added.

Hedge funds, also called absolute return funds, aim for positive or less volatile returns in both rising and falling markets, being on a low correlation with other traditional assets, such as shares and bonds, and can make them a compelling portfolio diversifying option.

Generally, Hedge funds are said to be the investments that employ pooled funds to invest in alternative assets or strategies, like use of derivatives, alternative investments and leverage in both domestic and international markets; while having a specific benchmark such as a market index or interest rate they are trying to outperform, or they may focus on achieving a benchmark return with less volatility.

There can be numerous types of hedge funds with distinct features and risks coupled with them. Although each fund is different, there are some common features used as tools used by hedge funds to define them:

Leverage- Some hedge funds can help to create leverage through increased exposure to certain assets or strategies, usually through borrowing; however, using leverage has equal chances of increasing returns as well as losses.

Derivatives- Derivatives are used by hedge funds to manage investment risk or to speculate on the future value of markets and assets, while some hedge funds use derivatives to gain or reduce exposure to certain assets, markets or events as derivatives give investors the option or obligation to buy or sell an asset in the future based on a price agreed at the time of entering into the derivative contract.

The value of derivatives depends upon an underlying asset (such as a share, commodity or index) and can be employed to obtain additional efficient investment coverage to a set of underlying assets without having to buy the assets directly.

Short selling- A long/short strategy is a common strategy uiltised by hedge funds including acquiring of shares which are anticipated to rise in value while shorting the shares whose value is anticipated to decline.

In short selling, an investor strategises to borrow a security from another party (usually a broker) and later sells it on the market, in an anticipation to buy an identical security at a lower price and return it to the lender at some time in the future, thus reaping profit from the difference between the buying price and the selling price.

Alternative assets and investments- At times, hedge funds also have the added option to invest in less conventional assets like derivatives, unlisted shares etc along with other hedge funds.

Other than having low correlation with traditional assets like shares and bonds, hedge funds have other benefits which are discussed below:

Hedge funds can vary widely in their investment strategy and risks, some common risks to look out for are:

Before getting acquainted with the Australian Hedge Funds, our knowledge about hedge funds would be fragmentary without learning one of the biggest events in the international Hedge Fund community.

Long-Term Capital Management was founded in the year 1994 by Salomon Brothers trader, John Meriwether, with principal shareholders being Nobel Prize-winning economists Myron Scholes and Robert Merton who were experts in derivatives investments and gain above-average returns and outperform the market.

The fall of LTCM impended a fear of nearing bankruptcy for so many banks and pension funds who had invested in LTCM. As a result, the Federal Reserve took steps to bail it out.

The above-discussed event is a lesson that the governments and the investment houses must have learnt with time. However, it was a prominent news that the early warning indication of a similar event occurred in the 2008 global financial crisis.

We shall now look at some of the Australian Hedge Funds and assess their performance in the recent past.

During the financial year ended 30 June 2018, BLA reported the following regarding its hedge funds:

More recently, BLAâs Fee Earning Assets Under Management (âFEAUMâ) was noted at $3.0 billion at 31 December 2018 down from $3.4 billion at 30 June 2018, mainly as a result of the closure of the hedge fund business (in December 2018), exit of the retirement living portfolio (in October 2018) and sale of residential development sites.

Another hedge fund management company operating in Australia is K2 Global Equities Fund (Hedge Fund) (ASX: KII) which provides investors with the opportunity to invest in a diversified global equities fund and investors can buy and sell units via their own online broker account, stockbroker or financial planner.

The fund is index-unaware, aiming to produce positive absolute returns over the long term with a capital preservation mindset and a mandate that allows it to actively manage its net market exposure by utilising both cash and shorts to help protect investorsâ capital. 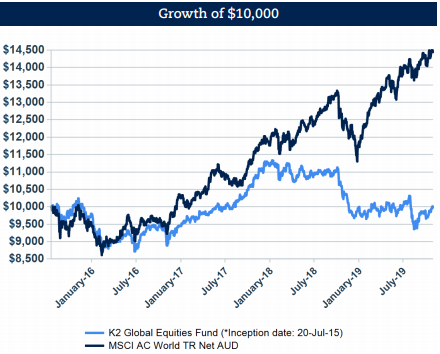 For the month of October this year, the K2 Global Equities Fund returned 0.9%, with the advantage from easing by Central bank in October with Australia's RBA cutting by 25bps to 0.75% and the US Federal Open Market Committee also reducing their funding rate by a further 25bps to 1.75% at the upper bound.

A positive contributor to Fund performance included the US-listed healthcare titan, United Health Group, which reported stronger earnings for the 3rd quarter than expected and upgraded its full-year profit guidance. The stock was noted rallying over 16%, with being oversold this year due to the highly politicised and unlikely adoption of a potential Medicare for All healthcare system.

In addition to this, the Fund is currently 93% hedged to the Australian Dollar to provide protection against the rising value of the same with respect to USD.

K2 Australian Small Cap Fund (ASX: KSM) is another hedge fund which allows the investors to invest in the diversified Australian Small / Mid-cap equities fund directly through the ASX and can buy and sell units by way of their own online broker account, stockbroker or financial planner. 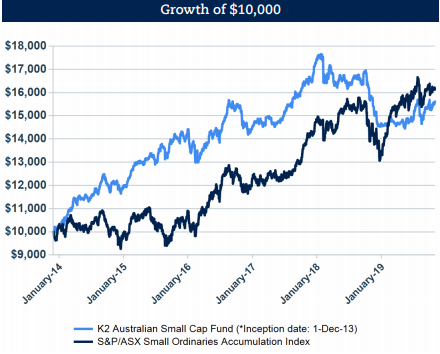 During the month of October of this year, the K2 Australian Small Cap Fund returned -0.1%, largely detracted by the influence of Fund's holding in Flexigroup Limited (ASX: FXL), whose stock price reduced 23% during the month the RBA indicated that it would be examining the policies of the new entrants into the Buy Now, Pay Later sector, reversing much of the gains from the prior month.

However, the Fund's holdings in Moelis Australia Limited (ASX: MOE) and Medical Developments International Limited (ASX: MVP) performed well for the month increasing 8% and 16% respectively by maintaining the excitement among the investors with several opportunities.

The net exposure of the fund for the month of October averaged 68.2%, with long exposure averaging 69.6% and short exposure averaging 1.3%. Moreover, with the inception of the Australian IPO pipelineâs evolution, the K2 Asset Management anticipates for some attractively priced investment opportunities in the upcoming months.

Having discussed both the sides of the coin and rolling the lens over some of the Australian Hedge Funds, we need to take extra care while deciding to choose the type of hedge fund to invest in.

Due to the complicated nature and restricted regulations historically, alternative investment assets have been generally maintained by investors or high-net-worth people.

In contemporary times, technology is playing a vital role in allowing fund managers to offer single funds to smaller investors that possibly invest across several types of alternative investments by overcoming various restrictions and limitations.

The alternative investment industry of Australia is of a significant size and has favourable prospective for growth in the time of financial market volatility and economic insecurity in the world.

Management of volatility and protection of capital in a diversified portfolio is one of the imperative characteristics of alternative investments and attracts the investor due to its returns and/or reduced risk.

CLICK HERE FOR YOUR FREE REPORT!
Tags:
ASX: BLA hedge funds ASX: KSM ASX: KII
All pictures are copyright to their respective owner(s).Kalkinemedia.com does not claim ownership of any of the pictures displayed on this website unless stated otherwise. Some of the images used on this website are taken from the web and are believed to be in public domain. We have used reasonable efforts to accredit the source (public domain/CC0 status) to where it was found and indicated it below the image.