Gold in a Tug of War with AUD, Charts Point to Bulls Tiring and Consolidation

The advocacy of many countries on China related to the origin and handling of the COVID-19 is now prompting China to tighten the law and policies concerning the trade of many commodities such as iron ore, barley, coal, which in turn, is now putting pressure on commodities prices across the globe.

Majority of consumption-based commodities such as copper, lithium, nickel, or the ones with decent supply in the market are now facing some tough challenges in upholding the recent recovery. While on the contrary, some commodities like iron ore are cherishing on investors’ sentiment, fuelled by the anticipation of strain on the supply chain- which is already under constraint amid bad weather in Brazil, due to the new inspection policy on the Australian iron ore imports, which accounts for a large portion of the overall iron ore import in China.

With China facing escalating trade tension with many countries, prices of base metals are again coming under pressure, which in turn, is now propelling the demand for gold.

To Know More, Do Read: Gold Back on The Front Foot as Powell Warns of Lasting Economic Damage

In the status quo, China is taking a backlash on Australia, which is the primary supplier of a large number of commodities to China. Recently China slapped an 80 per cent tariff hike on the import of barley from Australia citing that the trading prices of Australia or lower prices of the Australian barley in China as compared to the price of barely in its own market is putting pressure on the Chinese local barley industry.

Likewise, China has advised the state-owned power generators to utilise and support local coal and products of energy generation.

While, the impact of COVID-19 outbreak on the global economic activities seems to be minimising with recovery in China, Japan; the emergence of the new stringent trade policies is now again pushing the market towards gold. However, in Australia, the ongoing strength of the domestic currency seems to be keeping gold spot under check, and somewhat turning the recent price action bearish in nature. 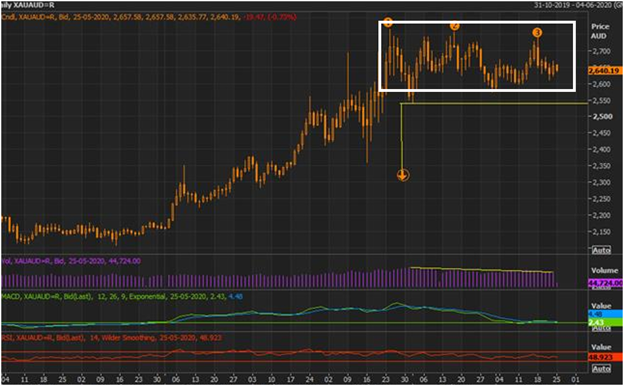 To Know More, Do Read: Get Ready to Pay ~2.8k for 24k Gold; Gold Bulls Break the Gated Cage

However, as per the classical chart patterns, rectangle pattern reflects consolidation phase where in the bulls and bears are in a tug of war, and the next price action would depend on the direction in which the price breaks.

Furthermore, the trading volume is declining slightly, which coupled with a downward sloping 14-day Relative Strength Index and a negative signal from 12,26,9 MACD is reflecting on the tiredness of bulls in keeping the upside rally in the momentum. 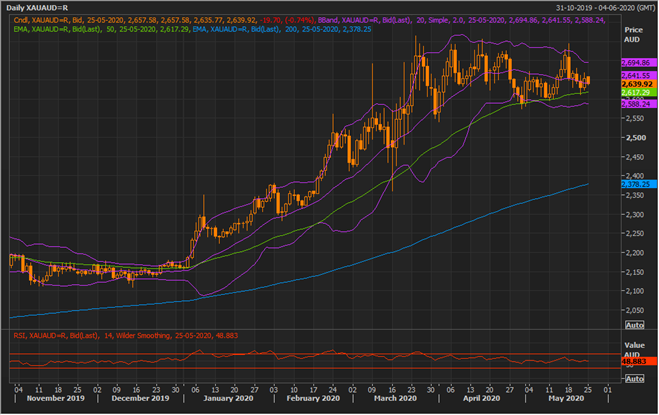 On further following the daily chart, It could be seen that the post reaching the +1 Standard Deviation of the 20-day simple Bollinger band, the gold spot has now retraced towards the mean value of the Bollinger, which is a 20-day simple moving average.

Also, it should be noticed that post expanding when the spot reached the high of $2,776.37, the Bollinger band is now shrinking with +-1 SD now coming closer to the mean value, which is further reflecting on a one-side move ahead.

The mean value of the 20-day simple Bollinger should now act as the primary support for the gold spot, followed by the 50-day exponential moving average and -1 SD of the Bollinger.

While the home currency is gaining strength in the market against USD, the USD is witnessing a gush due to prevailing sentiments across the risk assets, which is a potential risk factor of XAUAUD bears, as a further appreciation in USD could again keep a lid on AUD gains, which in turn, holds the potential to seed positive sentiments on the domestic gold spot ahead.

Apart from that, the recent recovery in the long-term yields on treasury bills is a potential risk factor.

On the contrary, while the domestic gold is showing some negative signs, which could be mainly due to the appreciating home currency, the gold spot is still standing tall in the global market. However, in the status quo, the ongoing stimulus drive across the global front is to an extend driving risk off trade, keeping a check on the gold rush.

Apart from that, the recovery in the industrial output is now pushing silver and palladium prices up as well, which could be bearish for the gold market ahead.

To Know More, Do Read: Silver To Reach USD 19.0 Per Ounce By Year-End- Says The Silver Institute