The LNG markets are currently facing a supply glut, with Australia, Qatar, and the United States topping the global LNG export. The demand for natural gas across the globe for energy generation is on the rise; however, the oversupplied conditions have maintained a check on the price gains, which is prompting the ASX-listed oil & gas explorers to play the volume games.

The ASX-listed oil & gas explorers are ramping up the production to offset the fall in natural gas prices in the international market and provide cushion to their balance sheets.

The ramped-up production from the ASX-listed oil & gas explorers had pushed the Australian LNG export above Qatar, and the increased use of the natural gas for energy generation in the global market could further propel the ASX-listed energy players as predicted by the industry experts previously.

Role of Natural Gas in the United States Power Sector

In the United States, many natural gas-fired generators came online throughout the country recently, especially in the PJM Interconnection- Regional Transmission Organisation which is responsible for managing wholesale electricity in many states in the U.S. 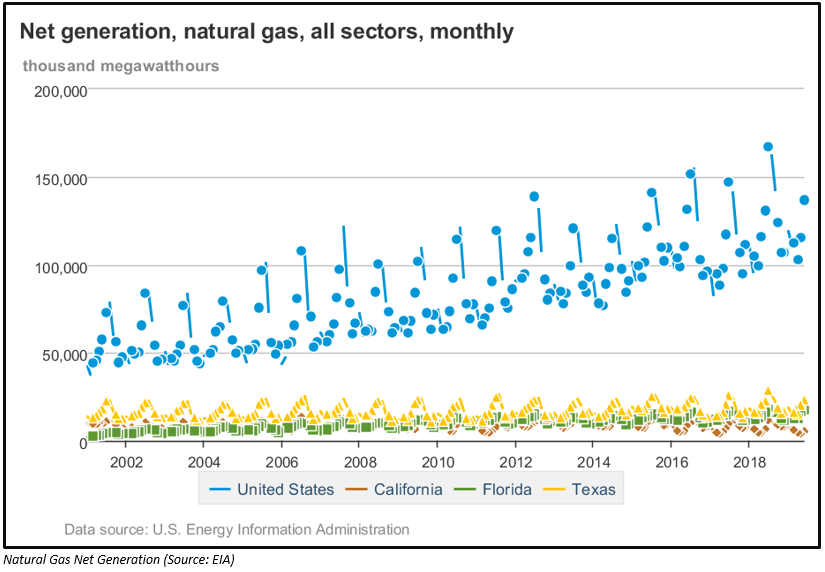 The Australian Department of Industry, Innovation and Science (or DIIS) estimates the LNG exports to touch $54 billion in 2019-20 as the production from the projects as mentioned earlier ramp-ups.

In June 2019, the Shell-operated Prelude LNG prospect shipped its first LNG, which is further anticipated to increase in the present year, when the Train 2 of Inpex-operated Ichthys LNG project also comes online.

Further estimations from DIIS are as below:

WPL is an ASX listed stock, and the company is the operator of the Wheatstone, NWS, and Pluto LNG projects.

The prospect delivered 14.2 million barrels of oil equivalent (WPL’s share) during the HY2019 and witnessed a major turnaround in the second quarter of the year 2019 to support the proposed Pluto-NWS Interconnector.

Woodside completed a truck loading facility in HY2019, which will enable the company to transport the LNG across Western Australia for use in remote power generation and heavy transport for local Australian mining companies.

Wheatstone delivered production of 6.8 million barrels of oil equivalent (WPL’s share) during the HY2019 with a decreased unit production cost.

Also Read: WPL at the Risk of Ouster from Senegal Project

STO is an ASX-listed oil and gas explorer, who entered into an agreement with the Australian government to address the domestic natural gas shortage issue, especially in Queensland and Victoria.

The company recently posted an interim record underlying profit of $411 million with a 71 per cent increase in interim dividend.

On the production counter, Santos produced 2.66 per cent higher barrels of oil equivalent in HY2019 as compared to HY2018 with 7.76 per cent increase in sales volume from Cooper Basin.

ORG is an ASX-listed oil and gas explorer, who recently entered into an agreement with Bid Energy (ASX: BID) for the Bid’s Robotic Process Automation platform (or RPA platform).

The other performance metrics for FY2019 are as below: 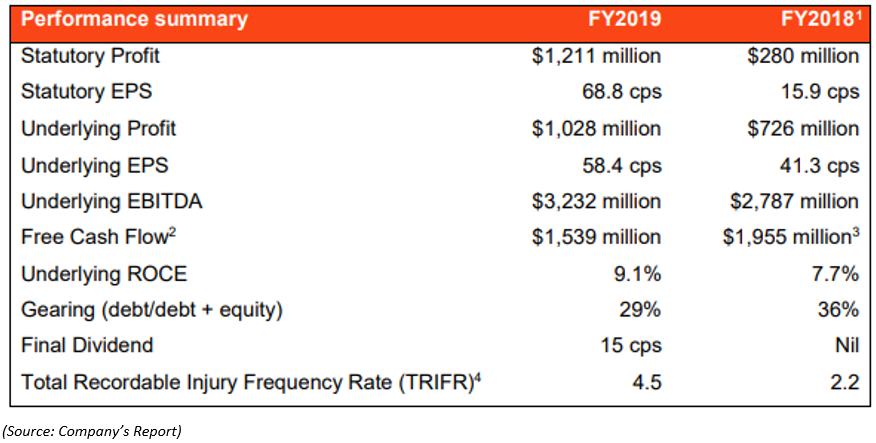 OSH is an ASX-listed oil and gas explorer, who recently got the endorsement from the PNG Government and the Government completed an inclusive review of the Papua LNG Gas Agreement and confirmed the Agreement as executed in April this year.

OSH is now waiting for the finalisation of the P’nyang Gas Agreement to complete the proposed integrated three LNG train development. Once signed the duo of PRL 15 and 3 along with PNG LNG JV will proceed into FEED.

Senex is an ASX-listed natural gas explorer, who recently secured an acreage from the Queensland government to encounter the domestic natural gas shortage issue.

Further, the company recently in the finished the production test of its Gemba1 gas exploration well.

SXY drilled five wells at its Project Atlas and ten at the Roma North prospect under the~ 110-well Surat Basin campaign and the company continues to deliver the natural gas development projects in the Surat Basin on schedule and budget.

Bid is an ASX-listed energy technology development company with a market capitalisation of 73.32 million (as per the closing on 5 September).

The company recently secured a three-year agreement with Origin to deploy its RPA platform across ORG’s Commercial and Industrial customers post a successful pilot completion earlier this year.

Once the 14,500 customers of ORG adopt the RPA platform of the company, the revenue generated would further increase by 12.8 per cent to the last ASR reported figure by the company as at 30 June 2019.

STX recently confirmed a gas discovery by Strike – Warrego joint venture in the Perth Basin, which is among the most prolific gas region in Australia.

The company intersected large units of clean sand of high quality below 4,790 metres onward at the West Erregulla.

CVN is an ASX-listed junior oil & gas player who recently got added to the S&P/ ASX All Australian 200 index (effective from 23 September 2019).

The company recently confirmed the presence of hydrocarbons bearing reservoir within the Caley, Baxter and Crespin intervals through wireline logging of the Dorado-3 well.