The aggregate GDP expanded at an average pace of 6% between 2010 to 2014. However, the GDP growth slowed to an average of 4.2% between 2015 and 2018. The decline in the growth was witnessed in Africa, Latin America and Western Asia.

The average GDP growth further dropped below 4% amid prolonged instabilities in Argentina, Brazil and South Africa, along with weaker economic conditions in Mexico, Saudi Arabia and Turkey. Further, the collapse in commodity prices, prolonged domestic weaknesses and, policy uncertainties also impacted the confidence of the investors as well as consumers, impacting the GDP print.

The lack of innovation also contributed to the slowdown in the developing countries as per the report. In the short-term, an innovative and flexible productive structure helps in the faster recovery in case of a downturn, enabling adjustment to macroeconomic shocks.

Apart from these, the global economic development was impacted by the US-China trade and technology disputes. Because of the disputes, the global trade, investment and manufacturing activity was adversely affected, although consumption growth has been relatively strong.

As per RBA, the major trading partner growth tapered and is expected to remain at a similar pace over the next two years. The slowdown in export facing sectors impacted the service sector. The overall global labour market conditions continue to remain tight.

Considering the slowing growth, downside risks and subdued inflation, various major central banks have eased monetary policy. In many nations around the world, the government and the corporate bonds have reached their historic lows. On the other hand, the equity markets have performed better. In the US, the equity prices have reached their record highs. Financial conditions in developing market economies have eased a bit. 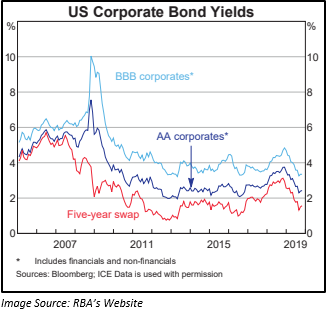 US-China trade and technology disputes have escalated further since August 2019, as per the statement on monetary policy released by Reserve Bank Of Australia in November 2019. Both countries have increased their tariff rates to ~ 20%.

However, in recent times, the tension between both nations have eased a tad bit. Certain negotiations resumed between the two countries. The two countries also reached a preliminary partial agreement in October that has postponed a few of the scheduled tariff rises. Still, the possibilities for a comprehensive trade agreement are doubtful, and there is a probability of further escalation.

The US administration is still set to impose a 15% tariff on the Chinese import from next month and a similar threat is also made by China in response.

Not just US- China disputes, some countries like South Korea and Japan have started using trade policy to address broader political disputes. They have imposed curbs on their bilateral trade in some strategic products like key semi-conductor materials.

As per RBA’s forecast, in 2019 and 2020, the major trading partner growth is expected to be ~ 3.5% due to escalation in the trade and technology disputes between the US and China. It is an indication of a further weakening in business investment indicators. Its influence might also be seen in service sectors as well as in labour markets.

Overall, the outlook for global growth is moderate; still, there is a possibility of downside risk. At this stage, there is a high uncertainty when it comes to the future progress of the US trade disputes with China and other nations. 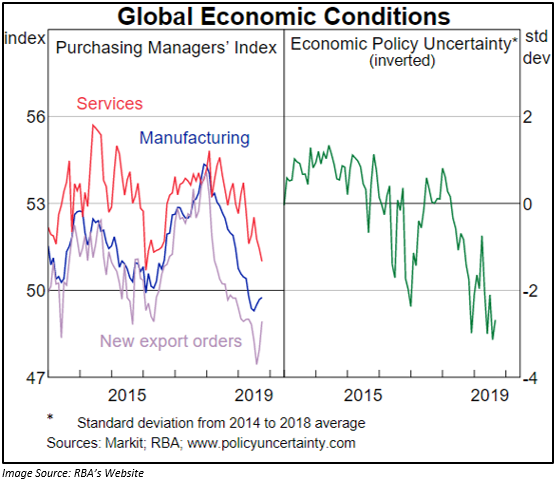 When it comes to Australia, the question which comes to the mind is how the global risks impact the Australian economy, especially for China. One may also wish to know whether China’s policy response would affect China's demand for exported items from Australia. To answer this, one should understand that China’s policies to aid their economy have been relatively tough, and they have increased their demand for bulk commodities from Australia.

The GDP growth of Australia was less than what was anticipated over the year to June 2019 quarter. The GDP growth in the first half of 2019 was better than the GDP growth in the second half of the previous year. The latest partial indicators pointed to a moderate GDP growth in Q3 2019, and a similar result is expected in Q4 2019. Thus, the year ended growth for 2019 would be at around 2.25%. Further, the year-ended growth is expected to grow to 2.75% over 2020 and ~ 3% over 2021, backed by the low level of interest rates, recent tax reductions, continuing expenditure on infrastructure, the increase in housing prices in certain markets and a brighter stance for the resources sector.

The Australian benchmark index S&P/ASX200 has had a successful 2019 amidst the aforementioned economic situations. The index is currently trading at 6672.9, delivering ~18% returns on YTD basis (as on 21 November 2019).

What would happen if the bill is through? It would allow agencies to arrest and deport criminal escapees who are wanted in territories with which Hong Kong does not have extradition accords, which includes mainland China and Taiwan.

Passing of this bill would infringe the sovereignty of the region along with its freedoms.

The bill was strongly opposed by the protestors, and they put down five key demands from the government, which includes:

In September 2019, the bill was withdrawn. The protest in Hong Kong has spread like fire around the world, and the influence is also seen in countries like the UK, France, US, Canada and Australia with rallies taking place in these locations.

The protest has adversely impacted Hong Kong’s economy as well as its society. The economy has slipped into recession as it was impacted in the Q2 and Q3 of 2019 with the decline in the retail sales followed by the drop in the potential of consumers to spend. Situations were adverse, leading many customers to revoke their bookings, and many banks and establishments were shut down. The supply of goods was also paused and stopped due to the protest.