All four companies have announced recent developments in the form of acquisitions, fund raising and strategic partnerships, in order to fulfil certain business objectives including global expansion, strengthening of exports, expansion of brand portfolio, growth in production etc.

Let us now have a detailed look at the updates for each of the companies.

Longtable Group Limited (ASX: LON) is engaged in manufacturing and selling of food and beverage products. The company’s shares are currently on a trading halt upon request by the management.

Changes in Board: The company recently updated that Tony Robinson, Chairman of the Board is planning to step down from his position. He will continue serving the position till the company finds a new Chairman.

Acquisition: The company recently completed the acquisition of Maggie Beer Products Pty Ltd. The acquisition has helped the company build a complementary portfolio of premium brands in lifestyle food and beverages that will increase its distribution reach in Australia and offshore. As a consequence, Maggie Beer will join Longtable’s board for a period of two years. In addition, the company also announced the appointment of Chantale Millard as the Group CEO for South Australia. She will be responsible to oversee the Maggie Beer and Paris Creek businesses.

1HFY19 Highlights: During the first half of the year, the company reported net revenue amounting to $11.1 million. Loss after tax for the period amounted to $4.73 million. The company incurred a loss due to a number of reasons including the acquisition of St David Dairy, investment in Maggie Beer Products and development of corporate business model of Paris Creek Farms.

Since acquisition, St David Dairy delivered continued revenue growth and increased customer numbers. Revenue for the period was reported at $3.60 million, as compared to $2.74 million in corresponding period of prior year. Gross margin from the business was lower than expected at 61%, due to higher, near-term cream costs. 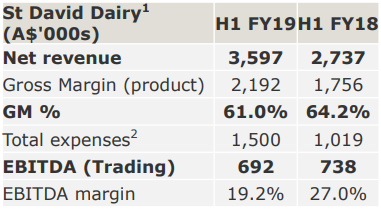 Performance of Paris Creek was significantly improved with resulting from the launch of the refreshed brand, new packaging roll-out, launch of national yogurt range and expansion of distribution channels into the Eastern seaboard. The business is expected to be profitable in the second half on the back of a redefined strategy for revenue growth for new branded products and cost base improvements. Revenue from the business amounted to $8.01 million, down 6% in comparison to H1FY18 revenue of $8.54 million. 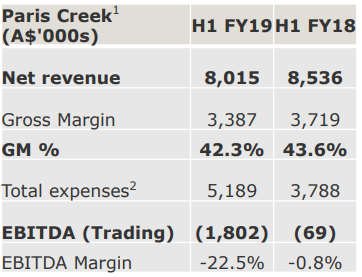 Maggie Beer Products was characterised by growth from new categories and major retailer sales along with strong EBITDA outcomes from an active cost- cutting program. Revenue from the business was reported at $11.55 million, up 4% on revenue of $11.10 million in the year-ago period. The business reported substantial EBITDA turnaround to $1.5 million profit from an EBITDA loss of $1.2 million in H2 FY 18.

Capital Raising via Placement: The company recently updated that it has received subscriptions for 100,000,000 new ordinary stapled securities at an issue price of $0.12 per security. This will amount to a total capital of $12 million. The company will use the proceeds from the placement for the acquisition of Infant formula Plant, construction of a facility and re-assembly of the Plant & brand development, new product launches and associated marketing.

Market Update: The company recently came up with an update on a material increase in milk prices in FY20. With regard to the company’s agreement with Australian Consolidated Milk, that commenced on 1 July 2019, the Board of AHF announced that it has secured a material increase in milk prices for FY20. Increase in the milk prices is expected to provide a boost to Group EBITDA in the range of $1.1 million and $1.3 million. In addition, it was notified that the company is progressing well to reach full organic certification for its Yaringa Farm by 20 November 2019. The farm’s organic milk produce, in excess of the usage by Camperdown Dairy Company, will be sold to Australian Consolidated Milk at a significant premium over conventional milk. The company’s Camperdown Dairy branded organic range is expected to be rolled out in FY20. The company has also held discussions with few potential distribution partners.. Camperdown Dairy Company is also targeting to launch a new brand named Echlin South for national distribution in FY20.

Acquisition: The company provided an update on the acquisition of the overseas infant formula plant which included a total estimated investment of approximately A$5 million, comprising A$725,000 for acquiring the Plant and A$350,000 – A$500,000 for dismantling and shipping of the plant. The latter also includes expenses for construction of the new facility and re-assembly of the Plant at the Campedown Dairy park site. The acquisition will help the company with access into the organic infant formula market without much initial cost.

Financial Highlights: During the first half revenue amounted to $10.60 million, which was in line with the revenue in the corresponding period of prior year. Loss for the period amounted to $1.19 million, as compared to loss of $0.87 million in the year-ago period.

The stock of the company is currently trading at a market price of $0.125 (AEST – 1:24 PM), reporting no change from the previous day’s trading price.

Murray River Organics Group Limited (ASX: MRG) is engaged in manufacturing of organic and natural food products. The company recently announced that it has completed the intake of third-party grower dried vine fruit. Total intake was reported at 1240 tonnes, up 15% on 2018.

Update on China Export Strategy: The company updated on a strategic partnership with an existing customer in the Chinese food industry, to further strengthen its China export strategy. The deliveries have commenced in June 2019 and is expected to contribute more than $6.5 million in sales over the next three years. This partnership represents a milestone in the expansion of the company’s export market exposure for organic dried vine fruit, mainly in China.

License to Grow Organic Hemp: The company has recently been granted the Authority to grow low-THC cannabis, which has a potential to grow into a new vertical in addition to the dried vine fruit business. With the Australian hemp market still in its infancy, the company has the potential to be the first large-scale producer of organic hemp in Australia and cater to the sustained, strong demand in global maerkets.

Business Update & Guidance: In the June business update, the company reported that it has significantly expanded its organic dried vine fruit export market. Exports to USA and China have doubled as compared to the prior year. Total yield of Dried Vine Fruit ended at 2081 tonnes, representing 18% reduction in harvest as compared to the previous season. In FY19, the company has made significant investments in vine remediation, nutrition and water management to enhance productivity from the farms in future seasons. EBITDA loss before SGARA for FY19 is expected to be between $3.7 million and $4.2 million.

1HFY19 Results: During the half-year ended 31 December 2018, the company reported revenue amounting to $30.2 million, down 23% on $39.4 million in the year-ago period. Net loss after tax for the period stood at $4.6 million, as compared to $22.2 million in corresponding prior-year period.

The stock of the company is currently trading at a market price of $0.080 (AEST – 2:40 PM), reporting no change on the previously traded price.

Angel Seafood Holdings Limited (ASX: AS1) is engaged in manufacture and sale of certified organic and sustainable oysters.

The company recently updated that it has entered into an agreement to acquire additional 1.5Ha of quality water in Coffin Bay for a consideration of $600,000. The expected payback period of the acquisition is 2.5 years and will be funded from the company’s cash flows and proceeds from disposal of non-core assets. This increases the company’s water holding in Coffin Bay to 12.25Ha and further positions it for additional growth in production over FY2020.

Q4FY19 Update: During the quarter ended 30 June 2019, the company reported sales amounting to $1.6 million, up 300% from the corresponding prior-year period. Sales of oysters for the quarter were reported at 2.0 million, as compared to 0.5 million in prior corresponding period. The company also commenced export sales, with exports accounting for 5% of total sales in June. The quarter was marked by strong operating cash flows. Cash receipts from customers were reported at $1.3 million, generating positive operating cash flow of $369,000 for the quarter. 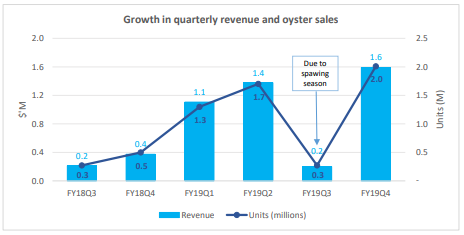