In 1950 petroleum product surpassed the coal consumption for energy generation and peaked in 2005. In 2018, the petroleum consumption also inched up to reach the level of 20.5 million barrels of oil equivalent per day; however, the uprise remained lower than the 2005 peak.

Natural gas consumption for energy generation inched up to reach the level of 82.1 billion cubic feet a day in 2018, which in turn, underpinned a continuous growth for eight years.

Coal consumption in the energy generation marked a fifth consecutive annual decline in the United States in 2018 and stood at just 687 million short tons, down by approx. 42 per cent from its 2005 peak, and down by 4.3 per cent from the previous year.

After having covered the consumption scenario in the United States, let us now have a look at Australian resource industry export trends for natural gas, coal, and oil, as the United States is one of the key consumers of Australian energy supply chain. 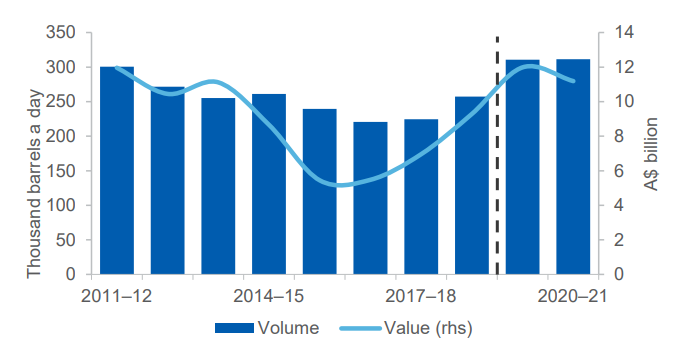 Post witnessing a bull rally in the starting of the year 2019 amid OPEC production cut, crude oil prices supported by many other factors such as U.S-Iran tension, Saudi tanker attacks, etc., rose significantly. However, the prices witnessed a downfall in May 2019 over the weakening demand scenario.

OPEC and Russia consented to decrease production by 1.2 per cent of the global demand to support the prices. 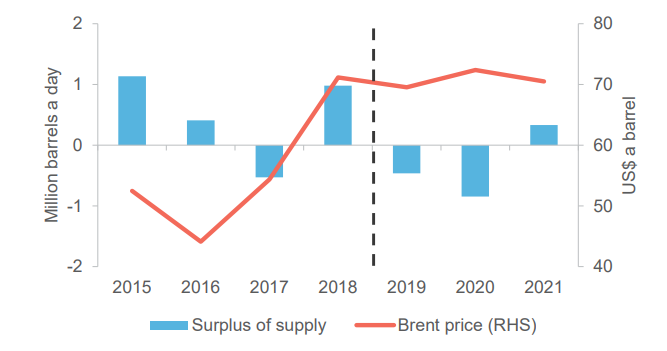 However, the forecasted growth rate is slower as compared to the average growth of last 3-years, which in turn, is mainly due to the slowdown in the global growth.

The oil consumption is forecasted to increase in Asia and Australia, with non-OECD countries expected to capture larger share of the growth.

Natural gas snaps a substantial share of the global energy consumption and LNG export from Australia, which accounted for 22 per cent of the worldwide supply chain in 2018, forecasted by the Australian DIIS to reach the level of $54 billion in 2019-20, up by $4 billion, as compared to the 2018-19 export of $50 billion.

The Australian DIIS estimates the LNG trade totalled at 318 million tonnes in 2018, which in turn, marked a growth of 10 per cent from the level of 290 million tonnes in 2017. However, the DIIS forecasts that the total global LNG supply would outpace the LNG demand growth in 2019 and 2020. 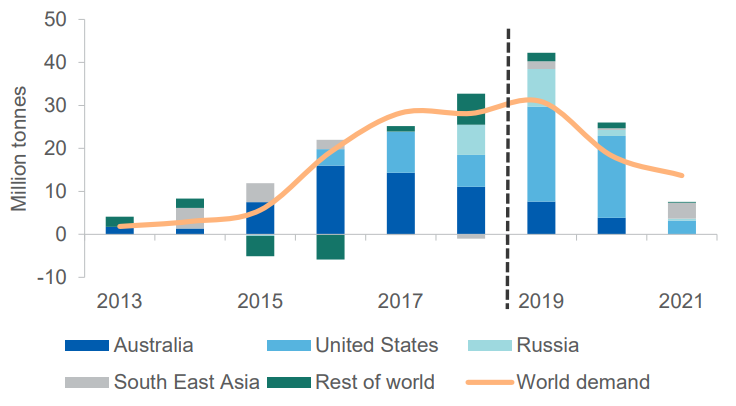 The coal demand witnessed a slow start at the beginning of the year 2019, and as per the Australian DIIS, the demand is expected to pick up post the June quarter. The DIIS further predicts that the import from most developed countries would decline as the developed economies phase out coal-power generation.

Chinaâs coal import is expected to be moderate, by the DIIS amid growing domestic production and stricter import rules to promote the local coal market.

However, the DIIS estimated and forecasted for higher demand in the developing economies, but a marginal decline in Australian coal export is estimated for 2021.

On account of the high reliance on nuclear power, Japan is also expected to reduce the coal import. 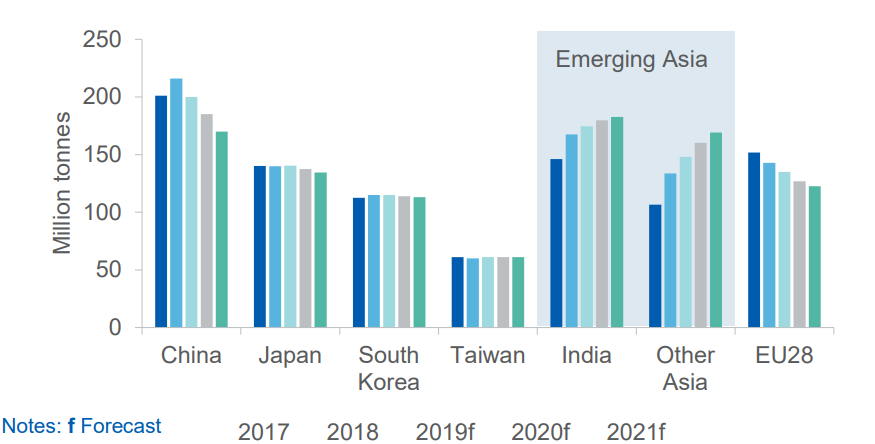 Over the increased global stance to curb the environmental pollution in line with Euro-6 standards, the coal prices have witnessed a sharp decline in the past, and the DIIS predicts slightly high volume export and less value. Major Australian Miners such as BHP Billiton (ASX: BHP) has also decided to keep coal out of the companyâs business portfolio. 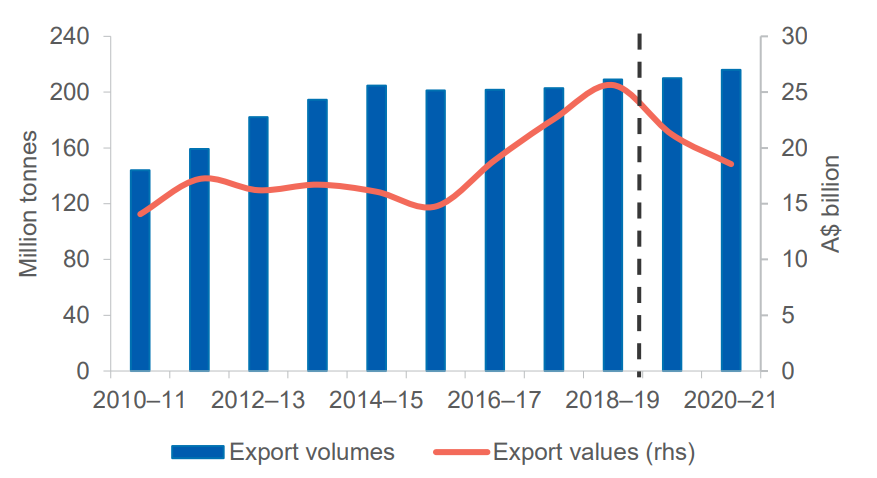 Post analysing the scenario for the fossil fuels in the power generation and after looking at the demand and supply dynamics on each significant fossil fuel. Let us have a look over the miner listed on the Australian Securities Exchange, which are engaged in the production of resources mentioned above.

WHC is among Australiaâs biggest independent coal miner, which is engaged in the development of coal mines in New South Wales. The company operates five open cut mines at Maules Creek and one underground mine at Narrabri.

WHCâs run-of-mine coal production for the year 2018 stood at nearly 23 million tonnes, and as per the company, it would grow over 40 million tonnes by 2030.

The Vickey open cut and Winchester South is expected to add more than 16 million tonnes of saleable coal in the companyâs bucket over the next 5 to 10 years. The companyâs March 2019 quarter production remained low as compared to the December 2018 quarter.

As per the company, the run-of-mine could be expanded to 16 million tonnes per annum, which would require approvals and documentation. 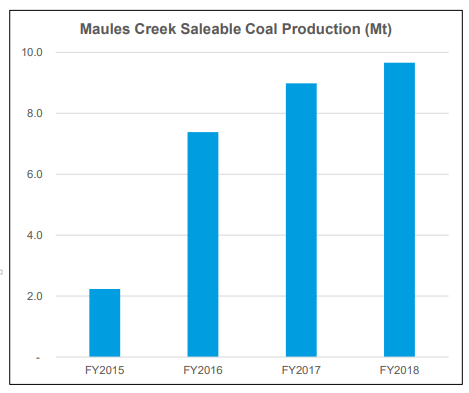 The other key operating operations of the company includes Narrabri and Gunnedah mines, with large life of mines.

WPL is an Australian Securities Exchange listed hydrocarbon explorer. The company is facing the Senegal project risk as ASX-listed FAR limited (ASX: FAR) has instigated arbitration proceedings against the company.

The business portfolio of the company includes Pluto LNG, North West Shelf, Wheatstone LNG, Burrup Hub and many others.

The LNG capacity of the prospect stands at 4.9 million tonnes per annum, and it contains a single processing train, and the company entered into a front-end engineering and design (FEED) in December 2018 for the construction of Pluto Train 2.

The sales and production figures for the March quarter for other significant projects are as:

The sales figure for the March 2019 quarter is as:

While the companies mentioned above are engaged in the primary resource production, let us have a look over a company which provides services for energy project developments.

WOR believes that the directional change in the global energy mix is evident; however, the pace of change is not precise. 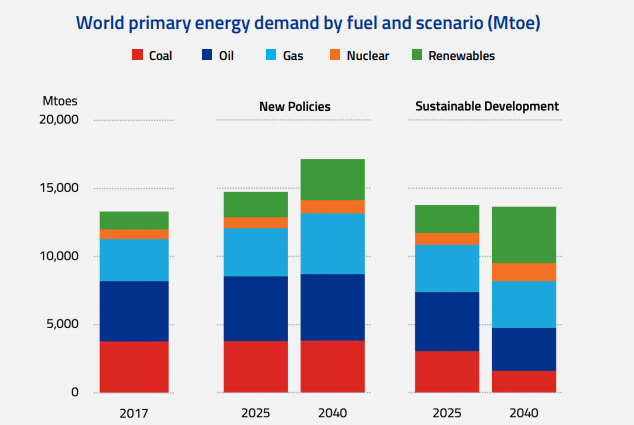 As per the company, the major shifts in the composition of oil product demand is a potential challenge for refiners.

And these changes are driving investment in upgrades and brownfield projects, where the investment of the capital expenditure is expecting the compounded annual growth rate of 5.5 per cent to 2022.

The changing trend across the sea shipment industry and the new IMO 2020 regulation to use less sulfur in the oil is among many other things, which is diversifying investors toward an alternative source of energy.

The leading desulphurization technology could help the companyâs client to leap in the fuel market with less sulfur.

WOR addresses many other such issues in the energy sector and provide services to address the transit of trend.