ASX-listed iron ore mining companies and their stocks are again back in action due to the recent rally in iron ore prices, which took the commodity to multi-weeks high, propelling stocks like Fortescue Metals Group Limited (ASX:FMG) to a record high while providing cushion to stocks like BHP Group Limited (ASX:BHP), Rio Tinto (ASX:RIO) and many more.

Iron ore prices have recently surged against the backdrop of falling inventory across the 35 significant ports in China, and coupled with falling steel inventory and recovering price is now improving the demand perspective and in turn, supporting market sentiments over iron ore mining companies, leading towards a gush in their stock price. 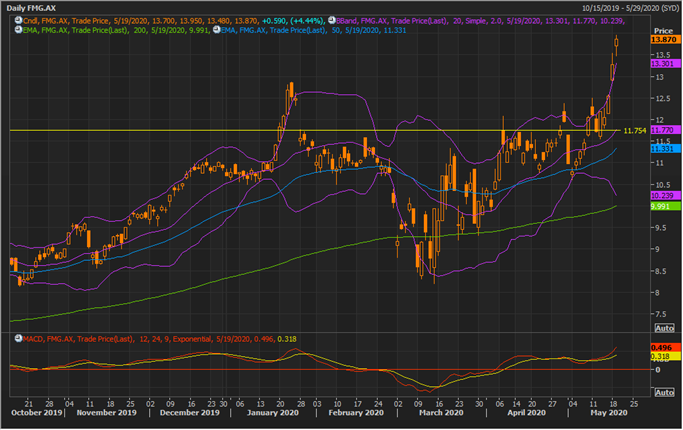 On the daily chart, it could be seen, that the stock is trading above the pair of 200- and 50-day exponential moving averages (EMAs) with a positive crossover between them. Also, in the status quo, the stock has breached the +1 Standard Deviation of the 20-day simple Bollinger band, causing it to expand further. FMG breached its major resistance line of $11.75, and is sustaining above the same, and the same level should now act as the primary support for the stock. The 12,26,9 MACD indicator is giving a positive signal while prices breaching the +1 SD, suggesting strong momentum and bullish sentiments. However, if we analyse the past price action, the stock breached the +1 SD during January 2020 as well, but quickly retraced towards the mean value and then towards the -1 SD.

The mean value of the Bollinger band should now act as immediate support (the level is overlapping with the medium-term support line of $11.75, which makes it a considerable support) followed by the 50-day EMA, -1 SD, and the 200-day EMA, below which the prevailing sentiments could change; thus, investors should closely monitor these level while navigating the stock for future price movement. 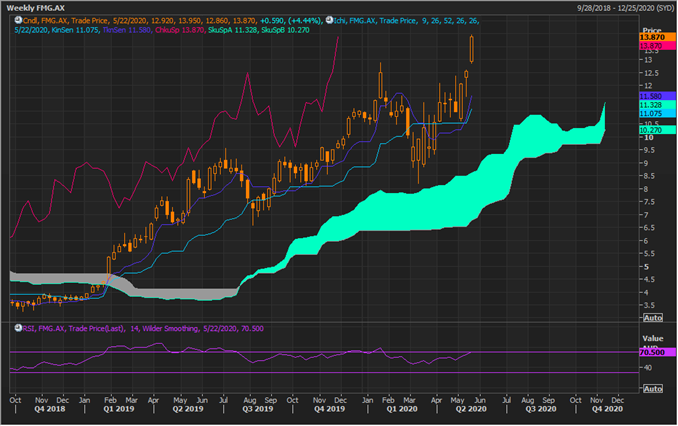 Also, the spread between the span A (mean value of the conversion line and the base line) and Span B, which is the mean value of 52-week high and low is now increasing, reflecting that the major trend is an uptrend and current sentiments are bullish in nature. The 14-week Relative Strength Index is following the price action and is above the mean value of 50 and below the overbought zone. 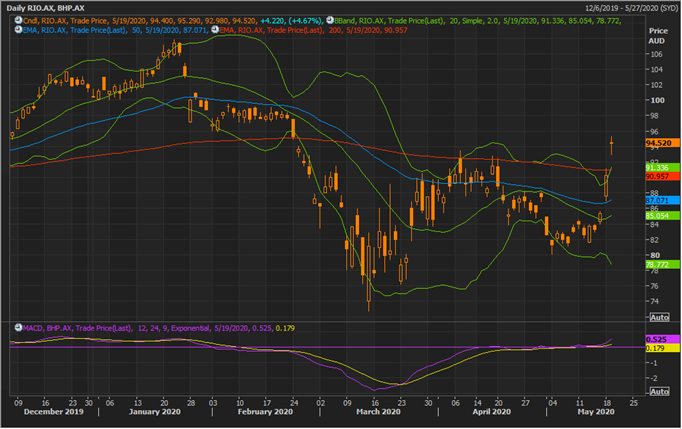 The stock has gained quite a momentum on a daily timeframe with two consecutive gap up opening, which denotes extreme bullish sentiments around the stock. Currently, Rio is trading above the paid of 200- and 50-day EMAs; however, without a positive crossover.

The stock has crossed the +1 SD of the 20-day simple Bollinger band while MACD is showing a positive crossover, reflecting strong momentum and bullish sentiments along with high volatility. As per the mean revision principle of technical analysis, the stock should retest its mean as it had done in the past; however, strong momentum usually negates the principle and investors should monitor support level closely while navigating the stock ahead. 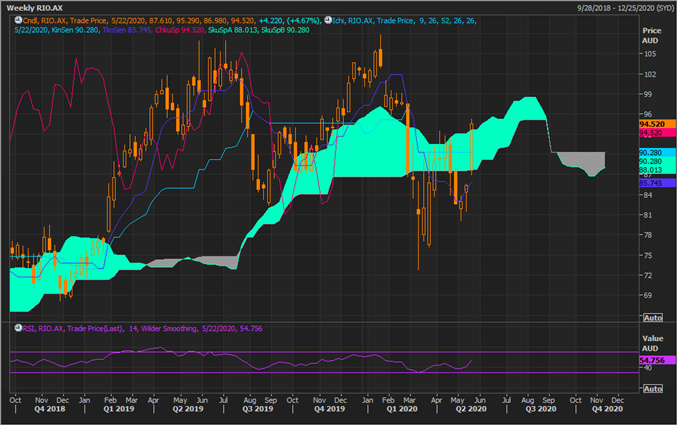 On the weekly chart, the stock is now testing the resistance cloud area with a positive cross between the conversion line and the base line; however, the Span A is yet trading below Span B with a considerable spread, which though had reduced slightly, but is yet large.

If now Rio breaches the blue cloud area with decent volume and sustain above the same, it would further attract bulls or else failure to do so would seed bearish sentiments ahead. The 14-week RSI is moving in tandem with the price behaviour and is above the mean value and below the overbought zone, suggesting that if the price could sustain the current gains and momentum, it could rise ahead to test the previous upswing. 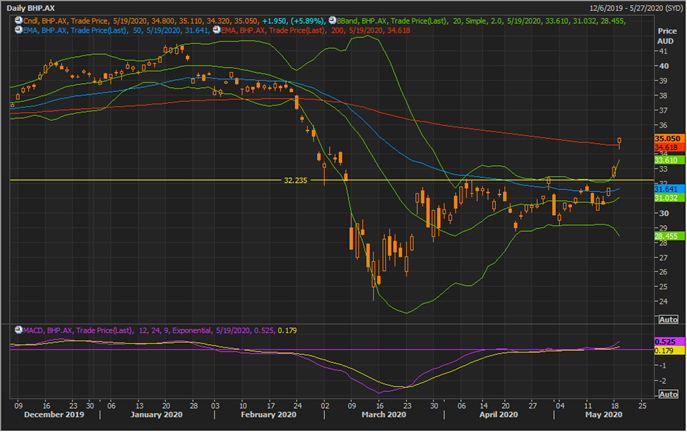 On the daily chart, BHP has just crossed the 20-day EMA and is currently trading above the pair of 50-and 200-day EMAs without a positive crossover between them. The +-1 SD of the Bollinger band has increased, which coupled with a positive crossover from the MACD indicator reflects the strength of the prevailing bullish sentiments. 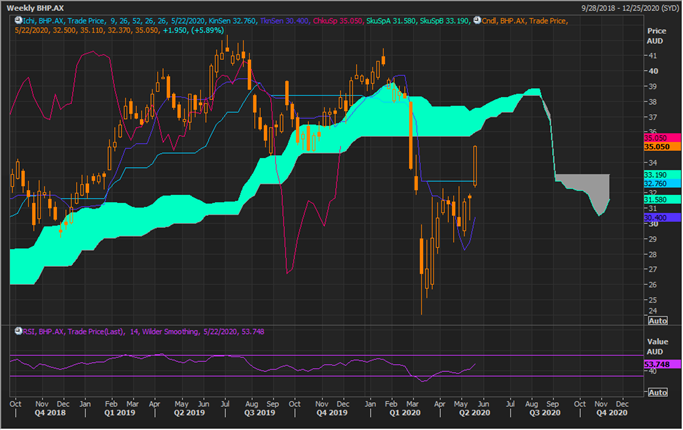 On the weekly chart, unlike FMG and RIO, the stock is neither above the resistance cloud nor is testing the same. BHP is presently trading below the resistance cloud while Span A is below Span B with a large spread, reflecting that the stock has yet to cover a lot of ground to reflect on strong bullish sentiments. The conversion line is still below the base line, which in turn, is further giving a strong confirmation of mixed sentiments around the stock.

However, the 14-week RSI is trading above the mean value of 50 and well below the overbought zone, which could be due to the recent spike in the stock price.