From fires to floods, the world has faced its fair share of calamities. Though we name it as natural disasters, more and more we come to realise that they are actually caused by human activities that lead to an imbalance in nature's cycle. The industry experts anticipate that if the current emissions remain unrestricted, there could be an average increase in global temperatures by over 4 degrees Celsius above the pre-industrial levels.

Transport Emissions around the World Source: Our World in Data

The Global economies came together at the Paris climate accord in 2014, to target the average increase in temperature at 1.5 degrees Celsius above the pre-industrial levels for this century. The accord requires cooperation & commitment of the countries to achieve the target.

Emissions from the transportation sector accounts to almost 14% annual emissions (including non-carbon dioxide emissions) and almost 24% of the global CO2 emissions. In Australia, transport is already the second-largest polluter, coming right behind the power sector.

Transportation is responsible for up to 30% of PM emissions in Europe & ranges from 12-70% varying unduly from transport-generated pollution, especially in Asia, Africa and the Middle East. The car ownership levels have reached above 450 cars per 1,000 persons in economies of Japan, Europe, Australia & the US, with the total motor vehicles even over 600 vehicles per 1,000 inhabitants in some regions. As for the developing world, the number is increasing with the growth in their economy.

Motor Vehicles per 1000 inhabitants vs GDP per Capita, 2014 Source: Our World in Data

As per 2014 study by TERI (The Energy and Resources Institute), India has a current average of car ownership stands at almost 13 per 1,000 inhabitants with total motor vehicles at 18 per inhabitants, but targets 35 cars per 1,000 inhabitants so, ignoring the demand from Large commercial vehicles would add almost 30.8 million cars assuming a population of 1.4 billion in 2025. India is one such example; much more demand would come from Africa & Central Asia.

The electric Vehicles might be the solution to the transportation sector, reducing the emissions effectively and controlling the temperature rise.

Electric Vehicle: Solution to the Puzzle

Cleaner power sources and electric vehicles might reduce the emissions from the transportation sector.

The current EV battery packs are based on lithium technology, enabling them to match or even outperform the ICE vehicles in certain aspects. An average light-duty battery has an energy density of 200 watts/kg-hour and a volumetric energy density of 200 - 300 Watt-hours per litre (Wh/l) with a lifecycle of 1,000 charge & discharge cycles.

Also, the composition of the battery has been heavily researched on, developing batteries on different compositions with varying prices and has lead to a considerable decrease in battery prices for the optimised range, longevity & stability. 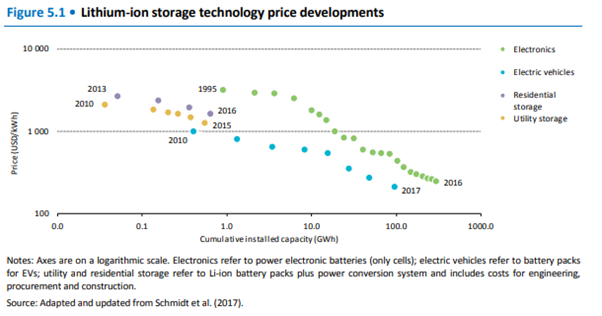 Further decline in the battery prices is expected by optimising the battery compositions for longer ranges.

Royal Dutch Shell has decided to replace its service stations with charging infrastructure in the United Kingdom. By the end of 2020, Shell plans to set up 70 EV charging stations and 200 by the end of 2021 in the UK.

“Our charge posts are supplied by 100% renewable electricity – so by definition, if you're an EV driver and you're charging up at Shell, you're driving carbon neutral" Shell UK general retail manager Bernie Williamson.

China - the largest EV market by volume, now has the world's largest EV charging infrastructure and may seek even further investment by the government and the firms. The charging piles in China have already exceeded 1 million milestone.

Preponement of the ICE sales deadline in the UK has accelerated the momentum to EV switching across the globe, with the issue under discussion in the UK.

As for Australia, the National Ultrafast EV charging infrastructure Network project includes the development and construction of around forty two ultra-fast EV charging spots on the key highways across all the major cities along the east coast including Adelaide, Perth & Tasmania.

A huge chunk of the young and middle-aged population in the major cities across the globe have now turned to cab services shared for their daily conveyance and transportation requirements. The quantum to which the ride-hailing services have pushed the car sales industry has been eminent in the major economies, but what if the ride-hailing companies started using electric vehicles.

Uber has joined hands with Nissan to switch to fully electric vehicle fleet by 2025 in the UK and has already launched a "clean air fee", charging the riders 15 pence per mile on all London journeys. Similar initiatives are also being launched by other ride-hailing service companies such as Didi and Ola.

China: The provincial governments are now working in collaboration with the ride-hailing companies such as Didi Chuxing, to add more EV to its fleet. China also aims to achieve a 25% market share of the EV by the year 2025.

UK & Europe: The most prominent and recent reform is the preponement on the restriction on ICE vehicle sales to 2035 from 2040 earlier.

Many of the European nations either fully or partially exempt the vehicle registration tax. Other tax reductions are also offered, such as the exemption of annual circulation tax for a period of 10 years in Germany. Ireland charges the minimum rate of the road tax from its EV owners. Purchase grants and other benefits are not uncommon in these parts of the world.

Several governments have included EVs for public transportation or have granted access to bus lanes to avoid traffic in the wee hours to lure people into buying cleaner vehicles. A few countries also offer free parking to the EV owners, further reducing their lifetime cost.

Many more reforms across the sector are expected in 2020 as we approach the inflection point of EV sales worldwide.