Energy Policies to Fuel ASX Energy Stocks Over the Long-Run?

The global energy sector is anticipated by the majority of the subject matter experts to witness a substantial growth over the coming years amid robust energy consumption across the various economies.

To Know More, Do Read: S&P 500 To Inch Further; Energy Sector To Leap And Push The ASX-Listed Energy Players

Australian energy consumption is moving in line with the anticipation of industry experts creating an opportunity for the ASX energy retailers that are already on an upswing over the high domestic energy consumption.

Australia is an active member of the Organisation for Economic Co-operation and Development, which is anticipated by the United States Energy Information Administration (or EIA) to witness strong growth in energy consumption over the coming years.

However, the EIA also anticipates the non-OECD members and especially China and India to witness higher energy consumption over the coming years.

The anticipation of an increase in domestic energy consumption along with the forecasted consumption growth in China, the primary destination for Australia to land its energy exports, could be beneficial for the ASX listed energy players.

While energy raw material producers could take advantage of the increase in export volume for energy products in the supply chain, the energy producers in the domestic market could cash-in on the higher domestic energy consumption.

However, the Australian energy market is witnessing spiked electricity prices, which could be a hindrance to the anticipated growth in the energy sector. The shortage in the domestic natural gas supply could also hamper the growth outlook.

The Australian government is targeting $70 per megawatt-hours average NEM Wholesale electricity price, and along with that, the government wants the domestic gas price to be in line with the average netback prices by 2022.

The policies of the government are outlined below:

The Australian government is supporting the New Generation Investments program, which is a multi-phased program, open over four years to June 2023.

Under the program, the Australian government would provide financial support to firm generation capacity to suppress the electricity prices in the domestic market, which could increase the reliability in the system.

The program would be technology-neutral, to provide all the ASX energy retailers equal opportunity and support the economically efficient option.

The government conducted registration of interest in December 2018 and January 2019 and received a total of 66 submissions. Post considering the submissions against the objective of lowering the electricity prices; the government shortlisted 12 projects, which includes, six renewable pumped hydro, five gas, and one coal project.

The twelve projects shortlisted by the government includes: 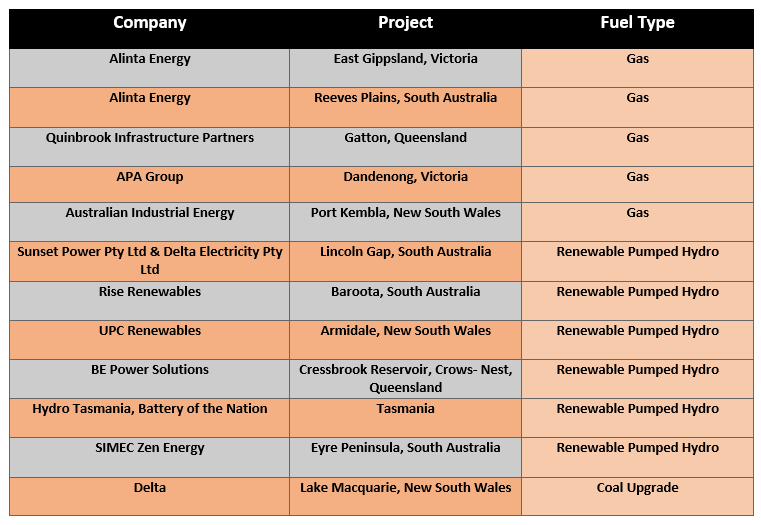 The Australian government announced a two-year $10 million program to support affordable and reliable energy for commercial and industrial customers.

The Australian government would undertake evaluation and feasibility of the projects in central and north Queensland via the New Generation Investments program.

Snowy 2.0 would link the Tantangara and Talbingo dams via underground tunnels and power stations. The project supports high storage capacity and would keep the NEM wholesale electricity price under check once the coal-fired capacity of Australian nears retirement.

The Liddell Taskforce would assess the impact of Liddell’s closure in New South Wales’ power supply and its impact on the local businesses and households. Liddell which was operated by the ASX energy retailer- AGL Energy Limited (ASX: AGL) served the NSW market for about 50 years, is planned for closure in 2023.

The fund would support regional Australia, and it would provide $50.4 million over the tenure of five years from 2019-20 to 2023-24 for the feasibility studies of the microgrid technologies, which could provide cost-effective energy supply.

RRO or the Retailer Reliability Obligation would incentivise the energy retailers and few large energy users to invest in on-demand resources, and the program was commenced by the government on 1 July 2019.

Apart from such programs to ensure a reliable and low-cost energy market, the Australian government is also focusing on strengthening the domestic natural gas supply chain, which could serve as the most favoured fuel for energy generation in Australia post the retirement of the coal-fired power stations.

Beetaloo Basin mounts at the top of a Sturt Plateau region about 500 km south-east of Darwin and hosts an industry estimated gas reserve of 6.6 trillion cubic feet. The Australian government is now working cooperatively with the Northern Territory to fasten the development of the basin to make it a world-class new gas province.

The Australian Domestic Gas Security Mechanism is the framework designed by the government and is overseen by the Australian Energy Market Operator (AEMO) to limit the consumption of natural gas in the LNG industry.

The Australian Domestic Gas Security Mechanism Review would assess the validity of the mechanism to ensure it remains fit for the desired purpose.

The ASX listed energy retailers could benefit the most over the high electricity consumption; however, the current Default Market Offer and other measures adopted by the Australian government could present headwinds in the short-run.