Please refer to the below table for the performance of these stocks, as on 19 August 2019:

Also, let us know about the stocks mentioned above in detail:

On 19 August 2019, the company announced a new partnership with Ally Commerce. Ally Commerce, based in Atlanta, is an eCommerce company and would offer Splitit’s instalment payment solution to large enterprise merchants.

Reportedly, the company has penned a five-year partnership with the Ally, under which, Ally would offer its merchant Splitit’s interest and fee-free monthly instalment payment solution as a payment method solution for their online sales platforms. Besides, the first merchant to utilise this service would be Respironics Colorado, which is part of leading sleep and respiratory care company Philips Respironics – wholly owned by Phillips.

Gil Don, Splitit’s CEO & Co-Founder, stated that partnership with Ally is a key addition to strategic partnerships to improve the growth of merchant customer base in North America. Further, the company’s solution allows smarter, responsible buying using credits, flexibility for consumers, and support to sales for eCommerce retailers.

As per the release, the agreement is consistent with the company’s strategy to scale up partnerships with large global organisations providing access to multiple merchants & higher value transactions, without additional operational costs. Besides, the agreement comes after the recently signed partnerships with EFTPay and GHL, and the company continues to emphasise on growing direct merchant agreements. 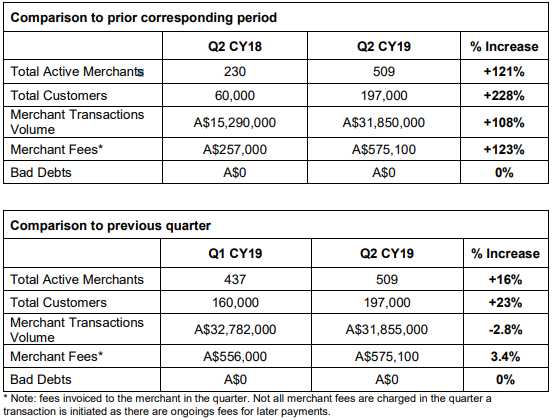 On 13 August 2019, Splitit had reported on the addition of Ableton to its merchant list, under a partnership. Accordingly, the company would earn merchant fees for every customer transaction passing through the Splitit Payments Platform.

Reportedly, there were no contractual minimum volumes under the partnership, and its platform was live in the US website of Ableton along with rollouts to other markets in the coming months. Besides, the company allows merchants to offer customers to pay in instalments for making purchases, which results in lower card abandonment rates & better revenue.

Recently, the company released its quarterly report for the period ended 30 June 2019. Accordingly, it had recorded staggering growth numbers in the business of the company. Reportedly, the company added 72 new merchants during the quarter, and the total number of merchants stood at 509 in 27 countries.

Meanwhile, the company also tapped substantial business in Australia and signed with major retailer- Kogan.com (ASX: KGN). The company was also engaged in its sales cycle with over 700 merchants from the US, Canada, Australia, UK, Italy, France & Singapore. Besides, the company was well funded with cash of US$23.7M (A$34.1M) as on 30 June 2019.

In a series of announcements dated 16 August 2019; the company had notified that the trading suspension on the securities of STEMify Limited would be lifted with the commencement of trading on 19 August 2019.

Reportedly, the completed the placement, approved in General Meeting, and issued 112,500,000 new shares to raise total funds of $2,250,000 at 2 cents per share, including $500k that were raised through an oversubscription clause. The company would utilise the capital to develop STEMify products – MyStemKits, 3D printer hardware, and costs of the Placement, settlement of legacy creditors and working capital requirements.

Meanwhile, the shareholders had approved the conversion of $50k owed to various creditors of the company into new shares at 2 cents per share in settlement of historical creditor position, and 2,000,000 new shares were issued in the company.

As per the release, the company completed debt conversion of $1,369,719 owing to Denlin Nominees Pty, including $980,265 under the Secured loan facility, an additional $210,300 in unsecured loans under the Bridge Loan Facility, and $129,203 owed under other unsecured creditor positions. Subsequently, the company issued 25,000,000 new shares in lieu of the total debt and granted unlisted options to Denlin. 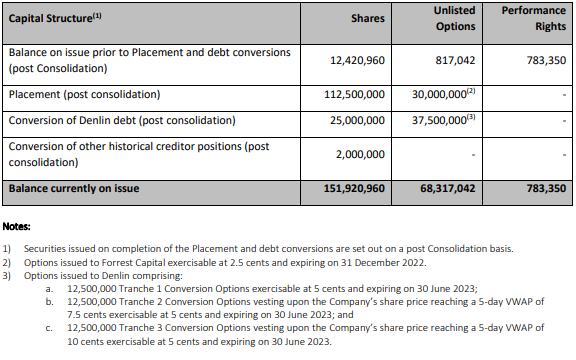 As per the release, the company had appointed Mr Jonathan Pearce to the Board as a Non-Executive Director effective on the completion of the placement. Additionally, he is an experienced corporate finance professional, currently holding the capacity of Portfolio Manager of the CVC Emerging Companies Fund.

Meanwhile, it was also announced that Mr Braydon Moreno had resigned as a Director of the company with effect from completion of the placement. Further, he would provide services as an independent contractor.

Previously, the company had reported that Robo 3D, Inc. (former manufacturing subsidiary) had appointed Robo 3D (ABC), LLC, as Assignee for the Benefit of Creditors. Reportedly, the company had entered into a binding agreement with the Assignee to acquire Robo brand, including IPRs, patents, trademarks & other agreement for a total of USD60k.

Reportedly, Ziocom is expecting to report NPAT for the full year in the range of S$1 million to S$2 million, an improvement of ~109% compared to a loss of S$10.87 million in the pcp. In November 2018, the group demerged the medical technology cluster, and this had incurred gestation costs S$4 million. Importantly, the results for the financial year for the period have considered S$1.3 million of the pre-demerger loss to this cluster.

Admittedly, the group had suffered considerable headwinds by the on-going global trade wars & geopolitical issues. Consequently, the second-half of the year was impacted by the uncertainties resulting in these issues, causing customers to hold back investments.

Meanwhile, it has impacted the profit margin, and the situation is not expected to improve soon. Importantly, the group intends to focus on transforming the existing business to gain a differentiation over the competitors while scaling the value chain.