Metallica Minerals Limited (ASX: MLM), established in 1997 and based in East Brisbane, Australia is engaged in the exploration, evaluation and development of mineral properties with primary focus on its bauxite project and other interests in silica sands, mineral sands, gold-copper and graphite resources.

The company’s principal projects are described as below. 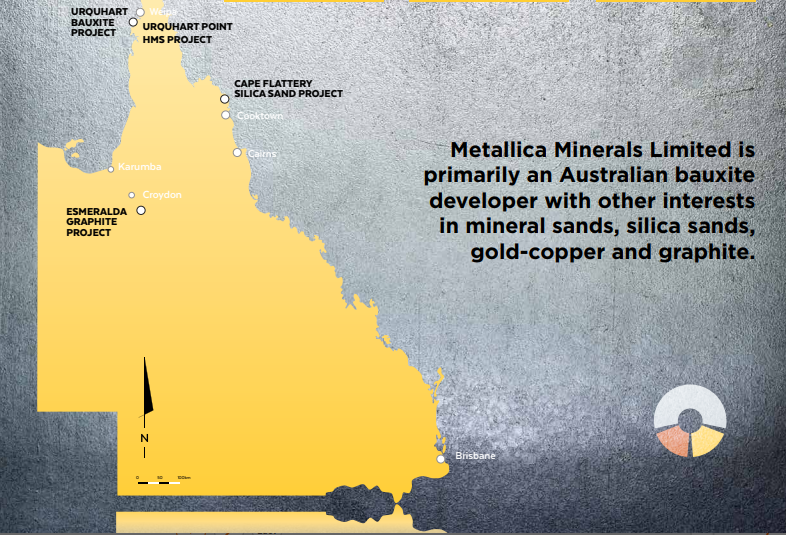 The Project is a part of the Cape York Bauxite and Heavy Mineral Sands Joint Venture (MLM owns 50% and is the Operator) and situated ~5 kilometers south-west of Weipa, a coastal mining town in the Cape York Peninsula. It is abundant with extensive deposits of high-grade pisolitic bauxite and encompasses two bauxite plateaux -Area A and Area B. Urquhart’s Mineral Resource is around 9.5 million tonnes grading 52.8% Al2O3, with 6.9Mt in the Measured and Indicated categories and presence of additional quantity of lower grade transitional material that will be assessed once mining begins.

The JV is conducting discussions into access arrangements for the barge-loading facility (BLF) at the Project for exporting the bauxite. The results of these new logistic studies would be released in the third quarter of 2019.

The recent changes transpiring in the global bauxite market have continued to reaffirm the company’s outlook for Bauxite pricing and demand to remain robust for the next few years. Particularly in China, the domestic bauxite supply continues to decline amidst government crackdowns on illegal mining and environmental inspections as well as falling ore grades at many domestic mines. Given that, the Chinese bauxite demand is estimated to rise by 65-70 million tonnes per annum over the next 5-7 years that would consequently amp up the import volumes into the country, thus presenting a lucrative operating landscape for Metallica Minerals.

The project (100%-owned by MLM) is situated in a remote part of Queensland and initial investigations into any scope of development at Cape Flattery would require access to the existing ship loading jetty infrastructure that is owned by Ports North and being utilised by Cape Flattery Silica Mines Pty Ltd (a subsidiary of Mitsubishi Corporation). The Board is currently evaluating possibilities to make further progress on the project.

The Urquhart Point zircon and rutile HMS project is part of the Cape York Joint Venture (MLM Interest 50%) with private Chinese investor Ozore Resources Pty Ltd. To realise value from this project, Metallica Minerals continues to entertain third party approaches in relation to the Urquhart Point HMS project and the modularised and containerised HMS processing plant, which remains in storage near Brisbane.

The Cape York Joint Venture (MLM Interest 50%) did not conduct any field work on regional HMS and bauxite exploration targets so far, with current focus being the Urquhart Bauxite Project. The company would consider a planned drill testing of some select exploration tenements during the dry season (April-November).

Further, the joint venture recently added two new exploration tenements to its Cape York Bauxite and HMS project. Exploration Permit for Minerals (EPM) application (EPMA) 27243 comprising one sub block was applied on the north side of the Skardon river, while the second tenement application was EPMA 27244, comprising 10 sub-blocks immediately south and adjoin the Urquhart Bauxite tenement.

As part of the ongoing review of the Esmeralda Project, a new Exploration Permit for Minerals Application EPM(A) 27210 ‘Clara’ was applied for in February 2019. Clara tenement augments Metallica’s graphite, gold and base metal exploration of the region. The first step to pursue the new style of mineralisation was restricted to desktop studies reviewing available historical exploration and geophysical data within the greater project area.

As a result of positive desktop studies at the Clara tenement and surrounding areas, Metallica has identified a number of additional intrusive-related gold and base metal mineralisation targets and thus applied for an additional tenement EPM(A) 27290, due west of the Clara tenement (see figure below). 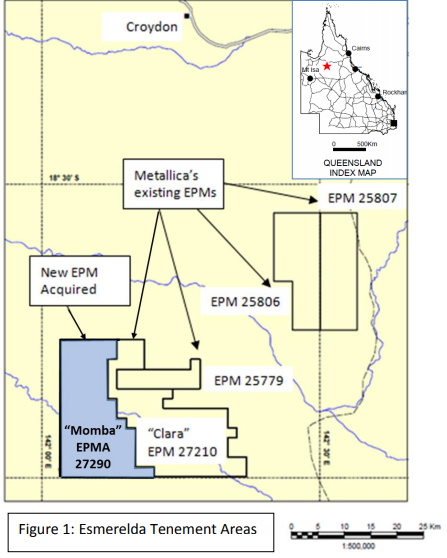 Recently in May 2019, Metallica Minerals announced to have defined an undercover gold-copper-graphite regional exploration opportunity, approximately 80 km south of the Croydon Goldfield to enhance the Esmeralda Project. The new tenement ‘Momba’ consists of 89 sub blocks, and augments Metallica’s graphite, gold and base metal exploration in the region.

The company is advancing with the Clara and Momba applications and plans to start preparing for a drilling program, to test coincident priority magnetic and gravity geophysical targets, whilst the EPMs are being granted.

In February 2019, the newly elected Board of Metallica Minerals announced to have commenced a process of reviewing administration, management and corporate costs and the reasons for the delay in bringing Urquhart Bauxite’s lengthy development into production.

Recently, on 12 June 2019, the company updated the market that the above review had been completed, with assistance from an independent Brisbane-based firm of lawyers, HWL Ebsworth (HWLE).

Some of the key findings of the HWLE review into the repeated and protracted delays concerning the project include a long time taken to execute the Haul Road Access Agreement, inability of Urquhart Bauxite Joint Venture entity, Oresome Australia and the owners of the Hey Point transhipment infrastructure to agree on the terms of a Logistic Contract, pending approvals to handle the volume of Urquhart Bauxite project’s product and others.

Going forth, Metallica and its JV partner will continue to progress studies and designs for building a barge loading facility and the results will be disclosed as available.

Meanwhile, the investing activities contributed AUD 322K to net cash inflows primarily through the proceeds from the disposal of part of shares held in Australian Mines Limited (ASX: AUZ). The net cash balance stood at AUD 3.63 million at the quarter-end.

Metallica Minerals expects to record further cash outflows of AUD 946K in the next quarter as it continues with its operating activities.

The company is diligently and actively advancing its initiatives transition from minerals exploration to development and production, concentrating on its bauxite assets with a drive to become a successful, sustainable and profitable bauxite miner producing 5-7Mtpa of bauxite over the upcoming years.