Auckland International Airport Limited (ASX: AIA) is engaged in providing airport facilities and supporting infrastructure in Auckland, New Zealand. AIA is one of the largest corporates in New Zealand.

March 2019 Monthly Traffic Update: AIA total passenger numbers in March 2019 were in-line with the prior corresponding period. International passengers excluding Transits posted a de-growth of 0.7%, whereas domestic passengers saw a growth of 1.1% as compared to March 2018. The de-growth in International passenger was largely due to the shift in the timing of Chinese New Year to early February in 2019. In addition, the Easter and school holiday period also shifted from late March in 2018 to mid-April 2019. Consequently, the arrival of Australian and Chinese visitors for March came down by 11.6% and 9.0%, respectively as compared to the prior corresponding period. Additional capacity, mainly on the Auckland-Queenstown route with +8,000 seats drove the growth in Domestic passengers.

Kathmandu Holdings Limited (ASX: KMD) is engaged in designing, marketing and retailing of clothing and equipment for outdoor, travel and adventure. The company operates through its wholly owned subsidiaries in New Zealand, Australia, United States and the UK. The company recently announced an ordinary fully paid dividend of $0.0400 per security which is to be paid on June 21, 2019.

The Management stated that Kathmandu is going through a transformational phase. With its focus on driving the growth in Australia and NZ, the Management is diversifying business channels, brand and markets.

After experiencing an excellent same store sales expansion at the beginning of FY19, KMD saw a comparatively softer trading environment in Australia and NZ at the time of the Christmas and Boxing Day period. Revenues for the period came in below the expectations, however, retail gross margin witnessed an improvement.

The company recently released an updated related to Chairman’s address. The company delivered another excellent result, for the 5th consecutive year of over 20% top-line growth, resulting in a 17% rise in EBITDA and a 150% growth in operating cashflow. Since its IPO (~5 years ago), the company has witnessed a CAGR (compounded annual revenue growth rate) of 29%. This exceptional growth was largely on the back of – Vista Cinema and Movio which continued to deliver strong results. Other businesses also performed well or are now on track for growth, going forward. JV (joint venture) business in China has continued to remain strong. 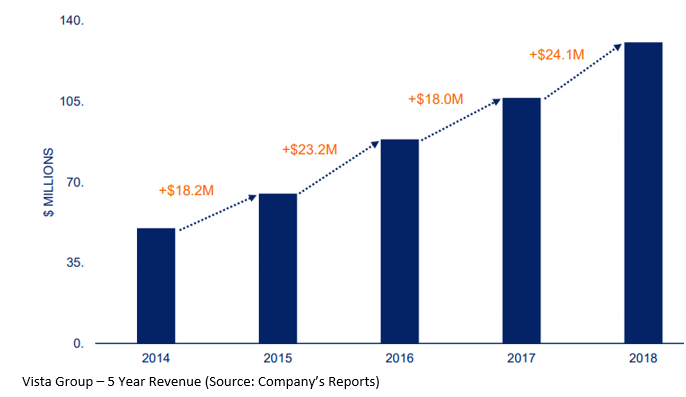 The company delivered strong quarterly results for the first quarter of the financial year (12 weeks to 20 May 2019) with same store sales growth across all three divisions. Total sales for the quarter stood at $182.8 million, an increase of $2.8 million or 1.6% as compared to the prior corresponding year. All the segments of NZ, Australia and Hawaii witnessed a decent same store sales growth of 4.9%, 6.0% and 8.4%, respectively. Total store numbers stood at 287, down by 22 on pcp as 22 Starbucks Coffee stores were sold off in October 2018.

Pizza Hut NZ’s sales for Restaurant Brands owned Pizza Hut stores came in at $7.7 mn for the quarter, a decline of 16.1% on pcp. Same store sales also witnessed a decrease of 4.6%. Restaurant Brands owned store numbers saw the opening of one store and shut of 2 stores from last year to 31, due to build and sell stores to independent franchisees. Total number of Pizza Hut stores of 69 are being operated by independent franchisees. Total network of the stores stood at 100. Network sales stood at $22.6 million in 1QFY19, a decline of 3.1% on pcp.

The company sold off 22 Starbucks Coffee stores in the month of October 2018.

Total revenues for Carl’s Jr. for 1QFY19 came in at $8.3 million, up 9.5% on pcp after introducing the delivery through the UberEats platform. Same store sales recorded a growth of 11.8% whereas store numbers were steady at 18 in 1QFY19.

1QFY19 sales for KFC Australia at $A40.7 million was increased by 1.9% on a total basis. Lower growth was primarily on the back of temporary closures for store refurbishments. Store numbers did not post any change, remaining at 61 in the quarter.

Taco Bell recorded sales of $US17.4 million, driven by successful promotions. Sales grew by 8.0% on a total basis and 12.6% on a same store basis (local currency) in the first quarter of FY19. Number of stores were 36 with no change in the quarter.

Pizza Hut Hawaii witnessed a growth of 0.1% on a total basis and up 3.1% on a same store basis (local currency) to $US12.3 million in the first quarter of fiscal year 2019. There was no addition to the store numbers in the quarter.