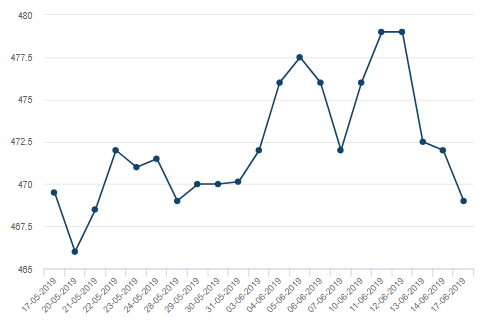 On the demand side, the recent U.S-China trade war is putting a curb on the steel demand, and the high production of steel coupled with less demand in stopping Chinese domestic mills from procuring iron ore on such high prices.

Despite the weak growth, low demand of steel in the Chinese domestic market build-up the weekly steel inventory in China, which rose by 0.38 million tonnes or 3.04 per cent to stand at 12.79 million tonnes for the week ended 14th June 2019.

The weak demand and a slower growth exerted pressure on steel prices and turned the steel future curve on LME downwards, which in turn, dragged the steelmaking raw material prices as well. 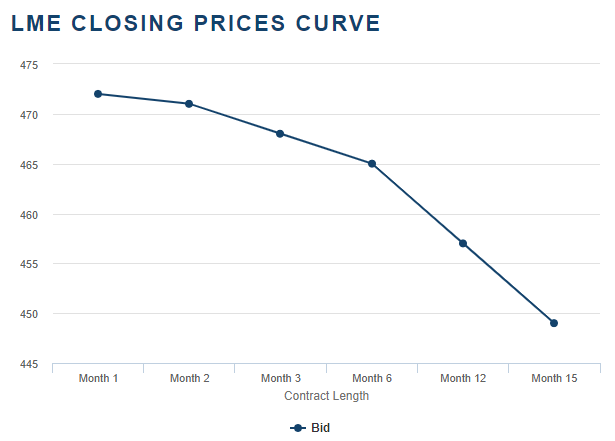 The iron ore recovery somewhat supported the ASX-listed iron ore miners; however, the weak steel demand and low prices exerted pressure on BlueScope Steel Limited (ASX: BSL), a steel manufacturer on ASX, and the share prices of the company dropped by 19.57% in the past three months.

In an announcement made public by the company on 18th June 2019, BSL mentioned that it expects the FY2019 underlying EBIT to approach $1,350 million, which in turn, mark an increase of 6 per cent from the previous corresponding period.

As per the company, the EBIT for the second half of the financial year 2019 is approaching $500 million. BSL also notified about the key changes in prior guidance provided by the company in February 2019.

The benchmark steel spreads of North Star prospect is now expected to decline by US$150 per tonne against its previous expectation of US$130 per tonne, which is lower than 1HFY2019; however, the company stated that the sales volume and operating performance of North Star remains strong.

BSL’s Building Products Asia and North America prospect is progressing well and reduced the manufacturing cost along with improvement program; however, the company highlighted that the market conditions have been softer than the estimation, particularly in ASEAN and North America.

BSL’s Building North America prospect is noticing general market conditions and order intake to be positive; however, despatch volumes and margins of the prospect is still getting impacted by longer customer lead times, as compared to the previous expectation.

BlueScope notified that other businesses of the company are performing in line with the February guidance, and the company is currently evaluating an opportunity to add a further 800,000 to 900,000 tonnes per annum of production capacity to its North Star mini-mill in the United States.

BSL notified that amid a strong cash flow, the company would further extend the previous $250 million on market buyback program by another $250 million, as part of its 1HFY2020 capital management program.

The on-market buyback culmination date is further extended from the current 30th June 2019 to 31st December 2019.

The share price of the company nosedived over the increased price spread amid low steel prices, and ended the day’s session at A$11.010, down by 1.167 per cent as compared to its previous close. The prices previously dropped from the level of A$11.840 (Day’s high on 17th June 2019) to the level of A$11.120, a plunge of more than 6 per cent in a single trading day.

Iron ore Past and Present Scenario:

Iron ore prices are enjoying the leverage of shortfall in supply and the prices again made a new 52-week high on 14th June 2019. The inventory across 35 significant Chinese ports fell for the tenth consecutive week on 14th June. As per the data, the iron ore inventory across the Chinese ports declined by 2.89 million metric tonnes to stand at 109.55 million metric tonnes, down by 2.57 per cent as compared to the previous corresponding period.

After such a steep rise, the iron ore prices felt the pressure of weak demand from the steel industry, and the prices dropped significantly on 17th June 2019 at the Dalian Commodity Exchange (DCE). The prices of most active September contract (Iron Ore Futures), started the day’s session at RMB 776.5, down by approx. 1.40 per cent.

Post starting the day below the previous close; the prices further plunged to register a low of RMB 760.5, down by more than 2 per cent in an intraday session, as compared to the opening price.

The substantial downfall in iron ore prices from its multi-year high pulled the ASX-listed iron ore miners down, and miners like Fortescue Metals (ASX: FMG), and BHP Billiton (ASX: BHP) started the day’s session down by nearly 2.40 per cent and roughly 1 per cent respectively on 17th June 2019.

However, the shortfall in iron ore inventory again supported its price, and the commodity rose today on DCE. The iron ore futures on DCE started the day’s session (18 June 2019) at RMB 766.5, down by approx. 0.39 per cent. Post starting the session below the previous closing the prices backed by short supply inched to mark a high of 773.0, up by 0.84 per cent from its opening.

The same recovery was shown by other iron ore miners such as Rio Tinto (ASX: RIO), and BHP (ASX: BHP) as well.