Australian economy has been severely affected by the coronavirus pandemic since past 3 months after being ravaged by drought and bushfires earlier. Australia is now bracing for reopening its economy after cases have been slowing down since the past month.

On 12 May, Treasurer Josh Frydenberg gave an economic update on COVID-19 in parliament. He delayed the Federal Budget 2020-21 delivery to October as it wants to figure out the full economic cost of coronavirus pandemic before delivering the budget.

Australia has reported about 7000 coronavirus cases with 97 deaths in total, which is significantly less than the US, UK and Europe. The Australian government and RBA have injected $320 billion into the economy to turn away a prolonged economic contraction.

Australia is set to witness its GDP to fall by over 10%, the biggest fall on record and unemployment rate to reach around 10% in the June quarter. Treasury has forecasted that the economy will shrink by $50 billion which is comparable to total collective quarterly production of South Australia, the Northern Territory, Tasmania and ACT.

He asserted that lower incomes, increased uncertainty and social distancing measures had been profoundly affecting demand and reducing cash flow. Household consumption, business and dwelling investment are anticipated to decline sharply in the June quarter. However, savings are expected to rise due to restrictions imposed and cautious discretionary spending by households.

Surveys reflected that job ads had been reduced by 50% during April while activity in manufacturing, construction and services witnessed their most significant monthly decline ever. Motor vehicles sale was down by 48% throughout the year while domestic and international travel saw significant falls. 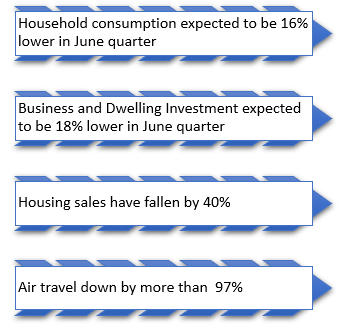 The number of jobs decreased by 7.5% with accommodation and food services experiencing most significant fall of 33.4% followed by arts and recreation at 27% while wages paid by businesses fell by 8.2%, between 14 March and 18 April.

The Treasurer stated that the overall economic data had been sobering.

The monthly financial report for March gives the most recent description of the budget situation. The underlying cash deficit stood at $22.4 billion during March-end, which was about $9.9 billion higher than the projection in the mid-year fiscal and economic outlook. However, the budget figures only consider early weeks of COVID-19. The figure is expected to deteriorate even more when the month of April is also taken into account.

The tax receipts have been $11.3 billion lesser while as of 8 May 2020, the total par value of Government Securities on the issue has surged by more than $50 billion to $618 billion since the mid-year fiscal and economic outlook.

With $320 billion of fiscal and monetary measures taken to stave off economic fallout from COVID-19, Treasurer stated that there would be a significant rise in government debt which can take many years to repay.

A further update on the economic and fiscal outlook will be released in June after the release of National accounts for the March quarter. The budget is due to be presented in October 2020.

Private sector to reboot the economy

On 8 May, National cabinet agreed to a 3-step framework to lift the restrictions by July and building a COVID-safe Australia. The Treasurer has called coronavirus a 1 in the 100-year event and cited it as a health and economic shock never seen before. Frydenberg stated that the economy would expand by $9.4 billion a month when restrictions are lifted gradually in stage 1,2 and 3. Below figure states the expected contributors to the GDP increase- 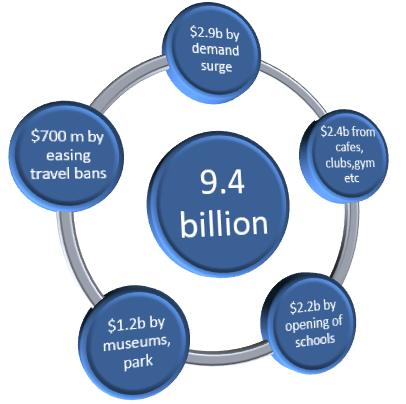 Treasurer further stated that the speed by which restrictions would ease may vary from state to state. About 8,50,000 people are expected to get back to work with more than half of the workers expected to come from accommodation and food services, art and recreation, transport and warehousing, construction and manufacturing.

However, he pleaded Australians to not disobey the restrictions in place as that might invite the need of a second lockdown which could cost the economy $4 billion a week.

During the past 2 months, Australian government worked aggressively to increase its healthcare capacity, lift aged-care sector and provide packages for households, businesses and employment while contributing additional funds to step-up research in the development of a vaccine.

Shadow Treasurer Jim Chalmers called on the Australian government to ease COVID-19 restrictions carefully following the advice of experts amid fears of second wave of COVID-19 that could impose a high cost on the economy. He also accused the Australian government not to have a roadmap to recovery and cited the financial statements to be just cut and paste work which the government had provided earlier, and Australians already knew about the same.

The labor asserted that JobKeeper and JobSeeker programs must continue helping Australian workers and jobseekers. But Frydenberg gave little indication on keeping it as he stated that there was no money tree and what is borrowed today must be repaid in future.

The private sector is expected to drive the economic rebound with businesses projected to contribute billions to national GDP. However, the economy needs to be ready to witness the largest-ever budget deficit and brace for slow recovery ahead.