Capital appreciation and dividend are the two wealth-building tools of the equity market. Capital appreciation refers to the profit that occurs when an investment is sold at a value higher than the initial sum invested, while the dividend is the part of the earnings of a firm that it distributes to its stockholders as a reward.

There is another type of dividend, called special or extra dividend, which is a one-time distribution by the company out of its earnings to its stockholders. Generally disbursed in cash, an extra dividend is more than what a company pays its shareholders in the form of usual dividends.

The normal dividends are paid out as per company’s dividend policies and are distributed to the shareholders on a regular schedule. However, the extra dividends are not pre-planned and are usually declared post an event which could be bumper profits, the decision to distribute the excess cash on the balance sheet, distribution of cash generated upon the sale of an asset/subsidiary, to commemorate a milestone like a landmark anniversary, etc.

Extra dividend distribution demonstrates a company’s faith in its shareholders and its strong foothold in the market. It could be used as a signalling tactic by the companies. It also improves the companies return ratios. However, the decision to pay an extra dividend is a capital allocation decision of a company and the investors would have to consider the other ramification due to the extra dividend pay-out as the company could use the cash to invest back into growth assets, acquire other companies, pay-out debt etc.

Let us discuss some of the stocks that have recently distributed special dividend and are listed on the Australian Securities Exchange (ASX). We will also cover the stock performance of these companies operating in different domains.

Founded in 1995 and headquartered in Toowong, Jumbo Interactive Limited (ASX: JIN) is an internet lotteries and gaming provider, which was listed on ASX in 1999. The company, via internet and mobile devices, offers official government and charity lottery tickets. JIN has its operations in Australia and Fiji. Moreover, it is engaged in the online sale of payroll software system. JIN sold its first lottery ticket on the internet in 2000. The company has a deal with Tabcorp Holdings Limited (ASX: TAH), under which the former operates the popular website www.ozlotteries.com in Australia.

Meanwhile, Jumbo Interactive expects a final dividend in the region of 18 cents each ordinary share for FY2019, keeping the dividend pay-out rate unchanged at 85%. 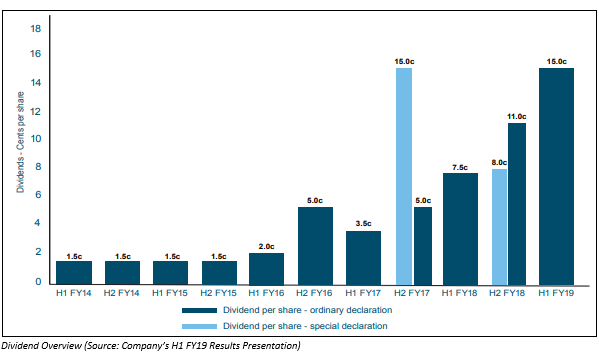 Fortescue Metals Group Limited (ASX: FMG) is a global iron ore producer, with its head office in Perth, Western Australia. The company, which was founded in 2003, has a consistent annual production of 170 million tonnes of iron ore. It is engaged in the operations of three mine sites in Pilbara and five berth Herb Elliott Port. The company was listed on the ASX in March 1987. 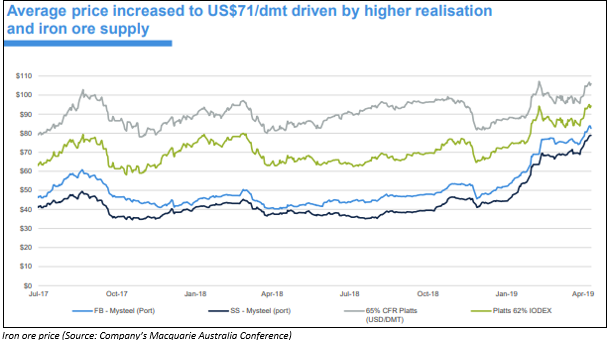 Tug fleet completion: According to an announcement on 27 June 2019, the company celebrated the completion of its fleet of tugs and towage infrastructure at the Herb Elliott Port in Port Hedland. FMG procured and built six tugs, as well as leased a further three tugs. Vietnam-based Damen Song Cam Shipyard constructed the six Rotor tugs of 85-32W. The new tug and harbour facility would be named as the Judith Street Harbour, according to FMG Founder and Chairman, Andrew Forrest AO. Tug operations are scheduled to start in July 2019.

Special dividend: Fortescue Metals Group announced a $ 0.60 per share of a fully franked special dividend on 14 May 2019. The special dividend was paid on 14 June 2019. Under the dividend reinvestment plan, $ 8.3798 is the allocation price for shares to be received by the participants for the dividend. The company calculated the allocation price in line with the plan rules, as the average of the daily volume weighted average market price of all shares of the company that are traded on the ASX during a five-trading day-period starting on 23 May 2019.

Wesfarmers Limited (ASX: WES) operates diverse businesses, with focus on Australia, New Zealand, United Kingdom and global markets. The company, which was founded in 1914 and is based in Perth, Australia, is engaged in providing home improvement and outdoor living solutions, in addition to office supplies and apparel and general merchandise. The company’s industrial division operates in the fields of energy and fertilisers, chemicals, and industrial and safety products.

It reported its outlook including significant runway in home, lifestyle & commercial market, strong focus on disciplined execution & cost control, good momentum & opportunities across both Australia and New Zealand, and investments for sustained growth.

Catch Group Acquisition: The company reached an all-cash deal worth $ 230 million for the acquisition of Catch Group Holdings Limited, an online retailer based in Australia, according to a company announcement on 12 June 2019. The company plans to fund the deal from its existing debt facilities. The acquired entity will operate as an independent business unit, with Kmart Group Managing Director Ian Bailey supervising Catch Group, though it is subject to the deal completion, pending a number of conditions precedent including approval by the Australian Competition and Consumer Commission merger clearance.

Dividend Investment Plan Allocation Price: On 3 April 2019, the company made an announcement regarding its dividend investment plan allocation price for the interim dividend and special dividend wrt the six-month period ended 31 December 2018. The price was set at $ 34.4090. It had a payable date of 10 April 2019.