Its services are availed on a project basis, subscription basis and the company also utilises LiDAR technology in delivering survey and mapping data sets. On 10 December 2019, AMX made its way into the ASX-listed universe, following a successful initial public offering (IPO) that raised $25 million at an issue price of $1 per new share.

In Australia, the aerial survey market has evolved from public-owned and managed operation to private sector players. The market has progressed to subscription-based delivery through pre-packaged datasets for wider consumption.

The industry is crucial for economic development in any country due to its importance in cities, societies, infrastructure development, environmental management, land tenure management and applications in natural resources and management.

Aerial imagery, LiDAR and 3D modelling are acting as a catalyst in developing base mapping data for several types of thematic information. According to the prospectus, the global aerial imagery market is expected to grow at a CAGR of 13.4 per cent from 2017 to 2023, and the global market stood at $1.4 billion in 2016.

According to Aerometrex, the drivers of growth for this market would include;

Further, the company believes that the current demand for aerial imagery in Australia is approximately $80 million to $90 million per annum, and the demand is increasing consistent with global aerial imagery market.

AMX had generated a revenue of around $16.1 million for the year ended 30 June 2019, considering the demand estimate by Aerometrex; it serviced to approximately 20 per cent of the estimated total domestic demand at the lower end.

In Aerial imagery and mapping, the company believes that its competitive edge lies in its capability in meeting the standard accuracy specifications for aerial imagery for public and infrastructure projects. And, its commitment to pursue quality, accuracy, resolution and service as the building blocks of project delivery has witnessed an increasing market share for the business.

In LiDAR, the company mentions that the number of LiDAR service providers has seen contraction due to the down-grading of competitor capacities. The market has also witnessed specialisation in areas that have led to a fewer competitors. Meanwhile, the company’s investment in sensor technology has cemented its place in the LiDAR market.

In 3D Modelling, the company has not come across any service provider delivering 2cm 3D models from unrestricted aerial platforms, and the company has achieved this feat due to its emphasis on research and development, innovation and refinement of methodologies. Also, its large metropolitan 3D coverages at 7.5cm pixel size and 5cm pixel size are also class-leading for this data type.

In MetroMap™, the subscription market for aerial imagery services is fragmented allowing strong sales performance outside regulated public procurement channels to drive rapid growth. Further, the emergence of MetroMap™ has resulted in a competitor to the current near-monopoly in this market.

Drones – the company believes that drone imagery is not the aerial imagery technology of the future. Its view for drones is that the technology should be used for cost-effectiveness in large-scale solution due to its sensor capability.

Meanwhile, the drone market has seen a rapid rise augmented with tight regulations. However, there are instances wherein the drone technology might be cheaper, and the selection of technology should always be based on product quality, accuracy, safety and cost-effectiveness.

Satellite Imagery – the technology is applied for continental-scale imagery services that capture at relatively very low resolution, and the highest resolution recorded by such technology is around 30cm pixel size. And, there has been an escalating demand for image resolution in the 2cm to 20 cm GSD range and satellites are not capable of delivering such resolutions.

In addition to these, the company is not contesting in the airborne geophysical survey services for mineral exploration presently.

Technological obsolescence – As the company is operating in a highly dynamic and rapidly evolving business environment, this could impact the business’ financials. AMX addresses this risk with investment in the latest technology, spending on research and development, and regularly monitoring the developments in the market. It is also developing in-house technology to mitigate third-party risks. 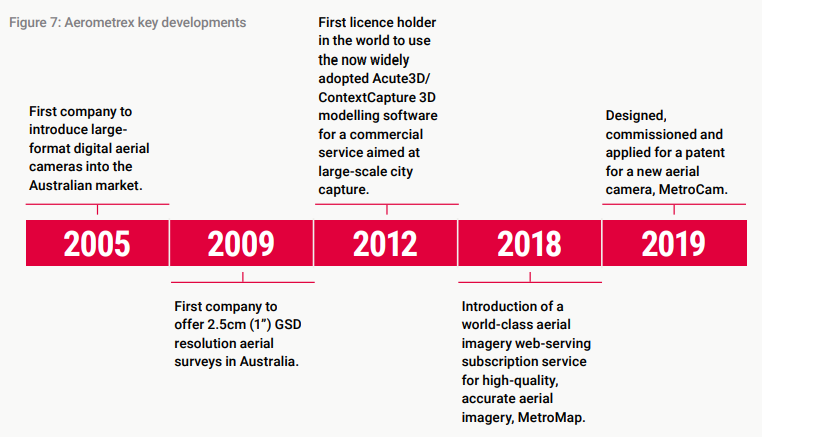 Increased Competition – The competitors have scaled up marketing campaigns that are confusing clients on choosing the range of available services. AMX intends to improve its reach through client education, conferences, seminars, website, messaging and social media to reduce this risk.

After the quotation on ASX, the company has released a market update on FY20 since prospectus. It was said that the business has continued its growth trajectory backed by momentum across all four divisions – Aerial, MetroMap™, LiDAR and 3D modelling.