The oil prices rallied yesterday amidst market speculation over escalating middle east tensions along with a decline in the United States Commercial crude oil inventory. 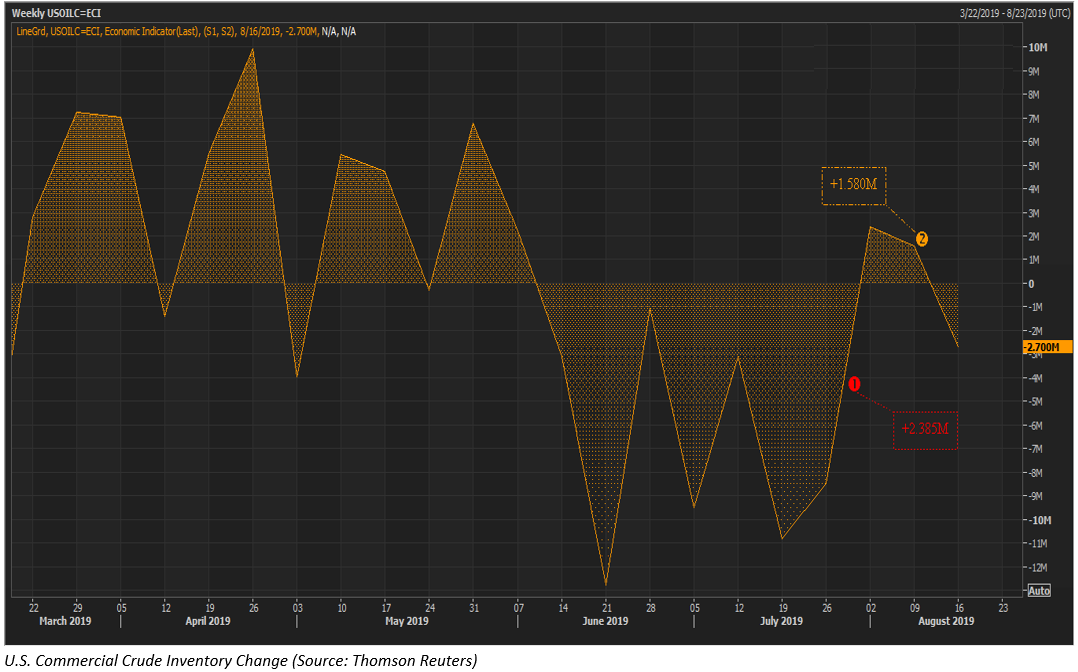 Post two consecutive additions in the United States commercial crude oil inventory, the oil prices fell; however, the decline in the commercial stock for the week ended 16 August 2019 raised speculations over the rise in demand.

Such speculations took the Brent crude oil prices to the level of US$61.41 in the international market yesterday; however, the high domestic production in the United States coupled with a rise in exports and fall in imports unfolded, and the prices were soon dominated by the bears again.

The domestic oil production in the United States is currently high and steady at 12,300 thousand barrels per day from the past three consecutive weeks. 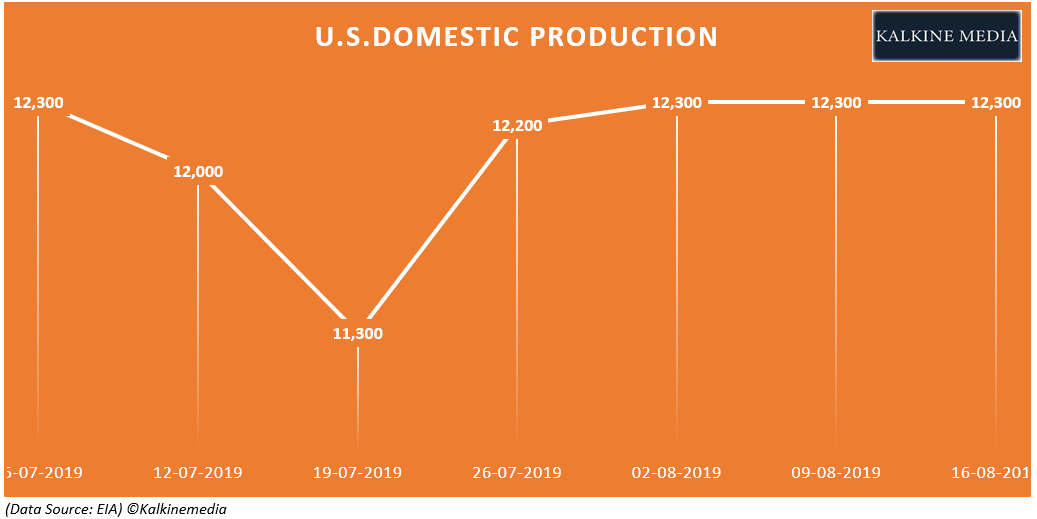 Total Imports and Exports for the Week ended 16 Aug.19:

The total imports in the United States for the week ended 16 August averaged around 7.2 million barrels per day, down by over 6 per cent against the total imports for the previous corresponding period. 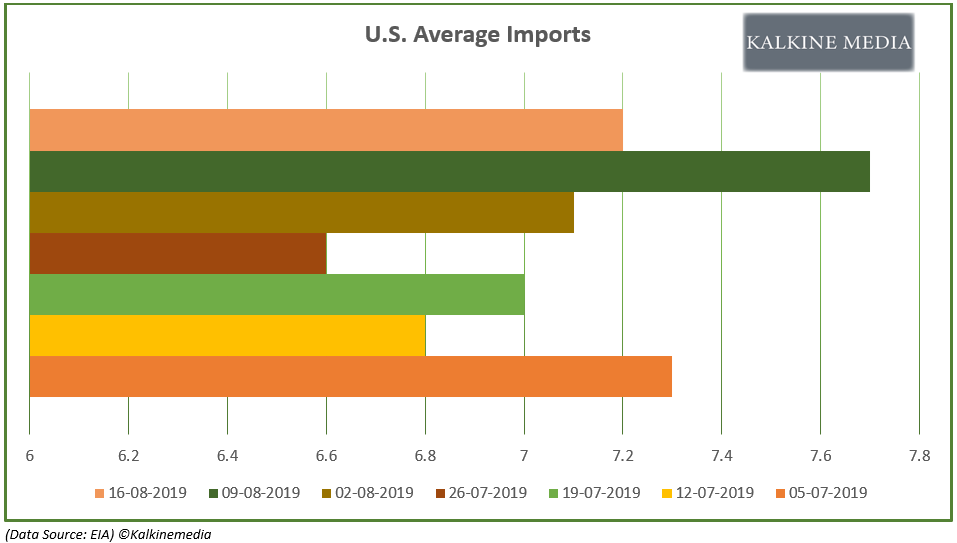 While the total imports in the United States declined, the exports from the nation witnessed a surge, which in turn, supported the supply in the global market and exerted pressure on the crude oil prices. 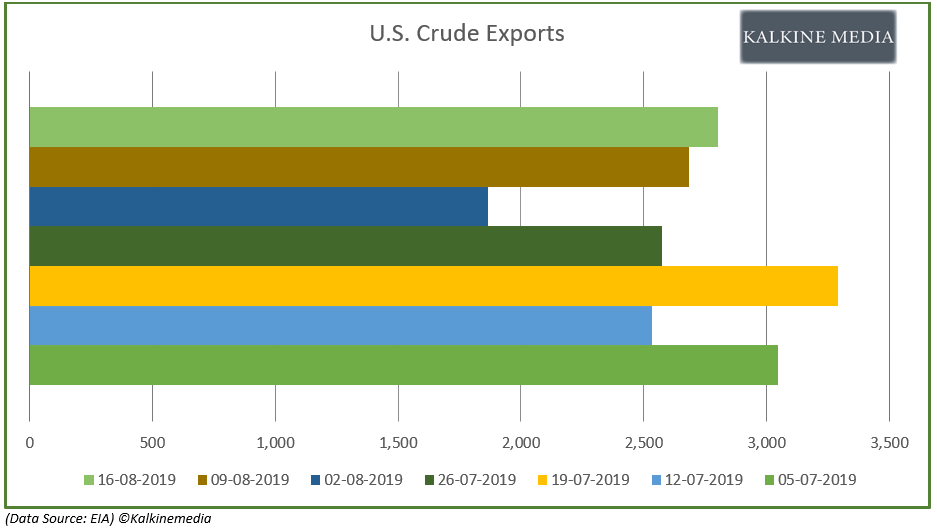 In a nutshell, increased domestic production coupled with a fall in imports and increase in exports provided cushion to the global oil supply chain, which in turn, exerted pressure on crude oil prices.

The oil market is currently trading in line with the EIA forecast for 2019, and the dark clouds over the global economic conditions are also capping the gains in oil prices despite a 1.2 per cent cut in production of total global demand by OPEC and Russia.

While the crude oil prices are feeling pressure in the international market, the ASX-listed energy players such as Origin Energy Limited and Santos Limited have witnessed gap-ups in their opening price.

The operating cash flow of $1,325 million in FY2019 witnessed an increase of 35 per cent as compared previous corresponding period.

The clean energy is showing a global interest, and recently it witnessed a staggering leap in the Australia market with supermarket giant- Coles Group securing clean energy power purchase agreement. While the global push of clean energy is high, ORG is targeting over 25 per cent renewables storage capacity by 2020.

The APLNG (or Australia Pacific LNG) production for FY2019 stood at 225 petajoules, which underpinned the growth of 37.5 per cent as compared to FY2018. In which Origin holds 37.5% 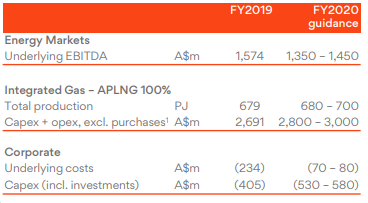 STO presented its interim performance for HY2019, and the company posted a 17.5 per cent rise in revenue from ordinary activities. The revenue from regular activities stood at US$1,974 million in HY2019 against the revenue of US$1,680 in HY2018.

The Statutory profit after tax stood at US$388 million in HY2019, up by 273.1 per cent against the previous corresponding period.

On the operational performance counter, the company surpassed the sales volumes and sales revenue of HY2018.

STO produced 37.0 million barrels of oil equivalent during FY2019, which in turn, underpinned the growth of 32.2 per cent from FY2018.

The Cooper Basin operations of the company generated US$534 million of product sales in HY2019, and the further metrics for the prospect stood as:

The production from the PNG prospect stood at 6.4 million barrels of oil equivalent in HY2019, up by almost 40 per cent from the previous corresponding period. Further metrics for the prospect stood as:

The company declared an interim dividend of US$0.06 a share during the period, up by 71 per cent as compared to the previous corresponding period.

Oil Search recently released its 2019 first-half report for the period ended 30 June 2019. The company posted the total production of 14.13 million barrels of oil equivalent in 1H FY2019, up by 38 per cent as compared to the previous corresponding period. 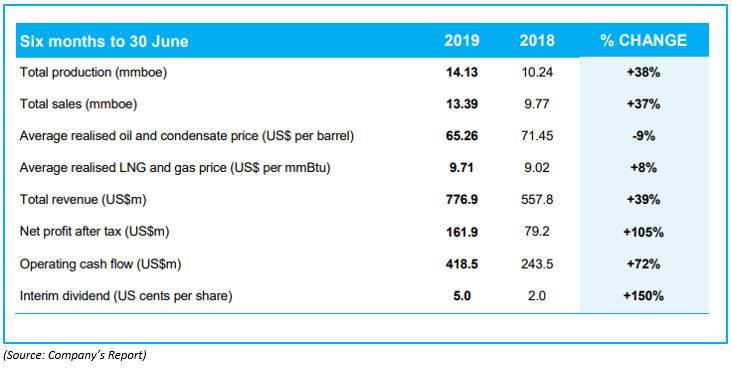