The recovery in crude oil prices, which started over the anticipation of improvement in oil demand and various production cut instigated by OPEC+ and North America to curtail about 20 million barrels of oil production per day, seems to be now taking a breather with prices of Brent Crude Oil futures (CFD) recovering from the level of USD 15.98 per barrel (intraday low on 22 April) to reach a high of USD 32.27 per barrel on 6 May 2020, which marked a recovery of ~ 101.9 per cent.

However, post trading for about a week in positive territory, crude oil now seems to have taken a ground around the same level with prices now hovering around USD 30 to USD 29 per barrel and facing resistance. 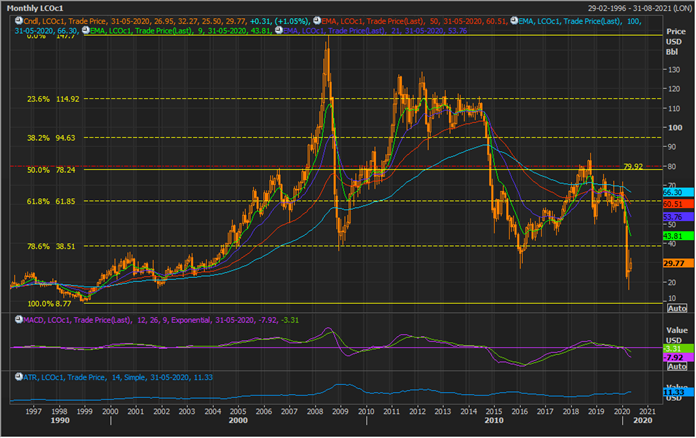 On the monthly chart, crude has retraced over 78.6 per cent of the primary up-rally which started from the level of ~ USD 8.77 and peaked ~ 147.7 per barrel. Currently, the 12,26,9 MACD or moving average convergence and divergence indicator is giving a negative signal while prices are trading below the pair of short-term (9,21) and medium-term (50,100) exponential moving averages. 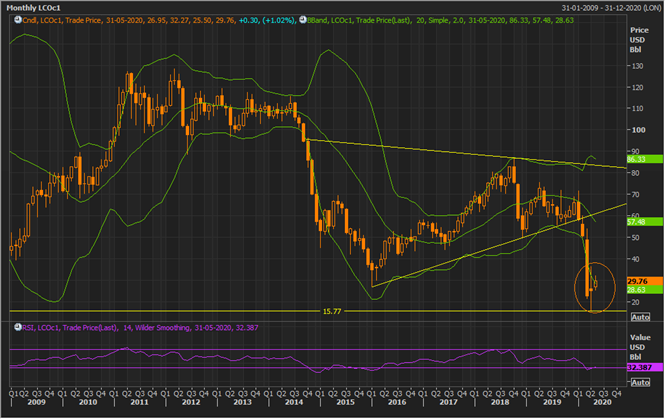 However, currently, the 14-month Relative Strength Index is below the mean value, but is above its oversold zone, reflecting that the market awaits further development in the oil space in terms of both demand and supply. 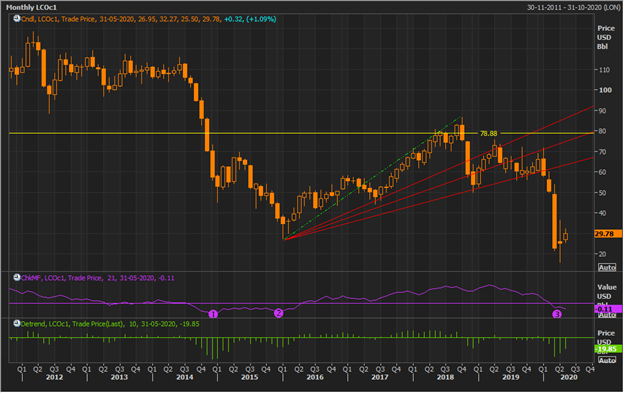 The Detrend Price Oscillator is also showing variation with the price behaviour, and while during the first quarter of the year 2015, the indicator has touched a bottom, prices remained relatively higher, and currently, while the price is near the recent bottom, the indicator is above its historic bottom seen in Q1CY2015.

The variation in both indicators as compared to the price behaviour suggests that crude oil could show a momentum ahead; however, it would be hard to assess the direction of it.

However, monthly charts above suggest that the price is near the -1 standard deviation from the mean, which coupled with the momentum signals from Money Flow and Detrend suggests that the price might attempt to cross the high of the spinning top. 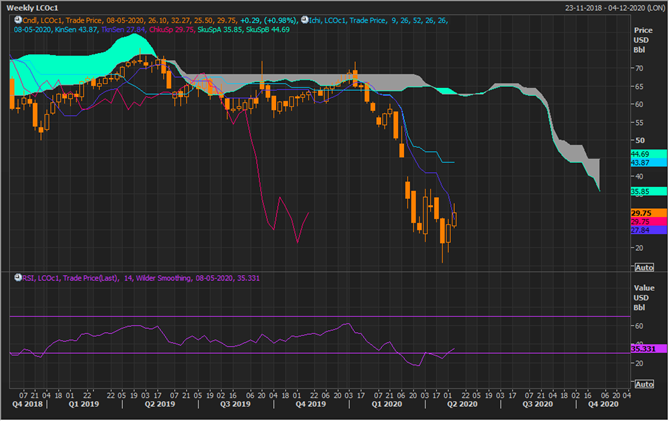 On the weekly chart, crude oil is trading below Span A or the mean value of the conversion line (dark blue) and the base line (sky blue); and,

However, in the status quo, crude oil has moved above the value of the conversion line, suggesting that bulls are entering the market, but the trend ahead would be largely determined by the result of bears sentiment, which according to the technical theory of Ichimoku cloud, would change if the price breach and sustain above the grey cloud area or the point where Span A has crossed Span B towards the downside.

The 14-week Relative Strength Index is moving in tandem with the recent price behaviour is currently above the oversold zone and below the mean.

On the weekly timeframe, the MACD indicator is showing a negative signal while the commodity is testing its downward sloping resistance while taking the support of -1 standard deviation of the Bollinger band. 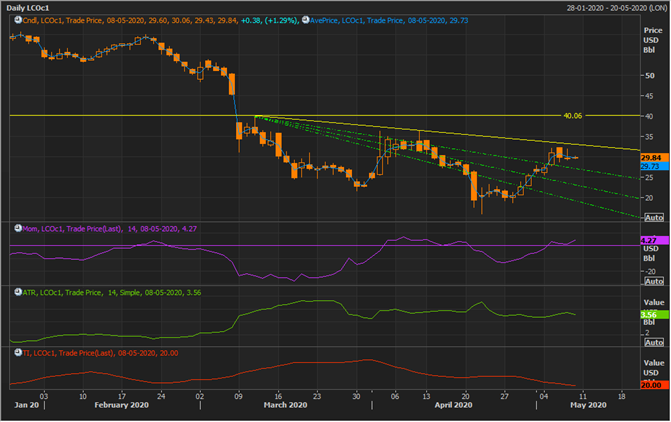 On the daily chart, it could be seen that prices are now facing resistance around the level of the downward sloping short-term trendline and is currently hovering above the average price indicator. Also, the trend-based indicators are showing mixed signal on the daily timeframe with momentum indicator (mom) showing an upward slope, while trend intensity (or TI) indicator is showing a downside slope.

On projecting the Fibonacci fan by connecting recent high to the recent, the near-term support (green lines) for oil prices could be seen.