U.S. Crude oil production is all set to achieve new milestones than previously estimated to fill the gap being created through production cut by Organization of the Petroleum Exporting Countries (OPEC). The U.S. is in continuous dispute with OPEC members over the voluntary cut of production to control the prices and is working drastically on its oil rigs to increase the production capability. As per the Short-term outlook report (SRO) from U.S. Energy Information Administration (EIA), the domestic crude output is likely to touch a high of 12.4M barrels per day (bpd) in 2019, up from its previous estimate of slightly over 12.0Mbpd. The EIA also raised its earlier forecast for 2020 production to 13.2Mbpd from 12.9Mbpd. The EIA also estimated that Global liquid Fuels inventories will grow by 0.4Mbpd in 2019 and by 0.6Mbpd in 2020.

The auspicious rise was mainly due to the productive wells, both in the Permian Basin of Texas and the Gulf of Mexico. The total active rigs count reached 1,049 as at start of February 2019, depicting an increase of 74 rigs when compared to the number of active rigs around this time of last year as per the EIA active oil rigs count. The violation of agreement among members of OPEC and several non-OPEC countries to reduce production by 1.2Mbpd by Saudi Arabia provided the boost to the U.S. to increase its production drastically. The agreement among the members of OPEC and non-OPEC countries was to decrease the production by 1.2Mbpd. However, Saudi Arabia announced that it is reducing production by more than the required level to support the prices and reduced the production in Libya to about 0.8Mbpd from 1.2Mbpd. The U.S. ban imposed on Venezuela's state-owned oil company, PDVSA also tightened the supply chain in the global market which in turn supported the crude prices, but the weaker global demand countered it and capped the gains.

As per the EIA, the November production hit a record high of 11.9Mbpd a day, up by 400,000 barrels from the previous month and marked a sixth consecutive monthly increase. The production at the current pace will surpass 13Mbpd in March 2020 which was previously estimated to reach the level of 13Mbpd in October 2020. 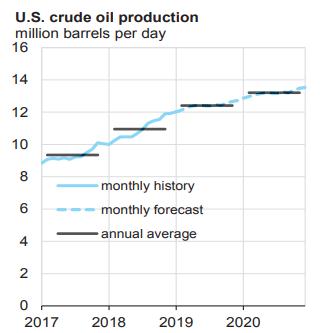 Impact on the Crude oil prices

As per the EIA, U.S. unrefined petroleum and oil-based commodity net imports are assessed to have tumbled from a normal of 3.8Mbpd in 2017 to 2.4Mbpd in 2018. EIA gauges that net imports will keep on tumbling to a normal of 0.9Mbpd in 2019 and a normal net fare dimension of 0.3 million b/d in 2020. EIA figures that the United States will be a net exporter of unrefined petroleum and oil-based commodities by 2020.

Seeing the on-going economic scenario, the decrease in net consumption of domestic crude due to the economic slowdown in the U.S. and high production can lead to the over-supply of Crude oil in the global market, which in turn can exert a pressure on crude prices amid weaker demand. However, the market participants will be eyeing the development by the U.S. Legislation that can allow the U.S. to prosecute the OPEC members and OPEC activities that are driving the prices.

CLICK HERE FOR YOUR FREE REPORT!
Tags:
OPEC crude oil EIA
All pictures are copyright to their respective owner(s).Kalkinemedia.com does not claim ownership of any of the pictures displayed on this website unless stated otherwise. Some of the images used on this website are taken from the web and are believed to be in public domain. We have used reasonable efforts to accredit the source (public domain/CC0 status) to where it was found and indicated it below the image.