Yes, coronavirus has indeed caused havoc for most of the stocks in the market. But some are still shining bright, as their business model appears to be exhibiting resilience amid the pandemic. One has to carefully look at how the business is generating revenues and impacts the flow of revenues among other measures.

Ironically, these three stocks are currently trading around lifetime high-levels, which speaks volume why these are COVID-19 market darlings at the moment.

Datadog, Inc. provides surveillance and analytics platform to the information technology teams of the business in the cloud world. Its services are used by organisations irrespective of their size across various industries. DDOG enables cloud migration, digital transformation, collaborations, and operational efficiency.

Earlier this month, the Company reported first quarter results for the period ended 31 March 2020. In Q1, Datadog recorded revenue growth of 87% over the same quarter last fiscal year and delivered a new product as well.

At the end of the period, DDOG customer count with annualised recurring revenue of above $100k was 960, up by 89% from 508 against the same period last year. Security Monitoring product was launched by the Company, providing operational resilience to the businesses.

Meanwhile, the Company continues to innovate new products as well as existing products. During the period, DDOG added new features to auto-detection engine – Watchdog, which is based on machine learning. Besides, the Company extended Net Performance Monitoring and achieved the AWS Lambda Ready designation.

Revenue during Q1 was $131.2 million. The Company achieved GAAP-based operating income of $3.8 million and net income per diluted share stood at $0.06. Operating cash flow for the period was $24.3 million with a free cash flow of $19.3 million. At the end of period, the Company had cash and cash equivalents of $798.5 million. In FY20, Datadog is expecting a revenue between $555 million and $565 million and non-GAAP based operating income in the range of $0 million to $10 million.

ServiceNow, Inc. was incorporated as Glidesoft, Inc. in California, UA. It serves to a wide range of industries, including Government, telecommunications, financial services, manufacturing, consumer products, information technology, oil & gas, and healthcare. The Company’s flagship platform automates workflows across functions in an organisation.

Recently, NOW released a four-app based dashboard for organisations to manage necessary steps, as they embrace re-openings and employees return back to workplaces. The new product would allow its customers to manage health and safety of the employees. 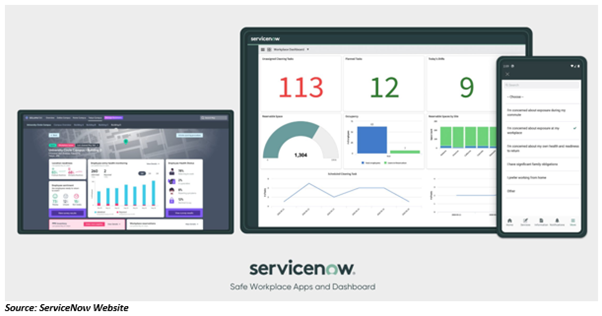 ServiceNow Safe Workplace pack addresses areas related to employee eligibility, health screening, safety management and PPE inventory management. Based on the responses by an employee, the application provides employees preparedness. Screening application allows the organisation to ensure employees are not having any illness when coming to work.

In late-April 2020, the Company reported first quarter results for the period ended 31 March 2020. Its subscription revenues for the period were $995 million, up by 34% against the same period last fiscal year.

In Q1, the business completed 37 new transactions having over $1 million in annual contract value (ACV), indicating an increase of 48% over the year. At the end of period, it had 933 total customers with over $1 million in ACV, growing by 30% over the same period last year.

On GAAP basis, NOW delivered total revenue of $1.04 billion for the period with total gross profit of $823 million. Its net income for the period was $48 million, equating to diluted earnings per share of $0.24.

Management believes that the business is in a strong position to weather the shock of COVID-19, but many of its customers are operating in a challenging environment that may trigger a reassessment of spending.

Therefore, they have updated the guidance for the full year as well as second quarter, assuming that most of the impact on its customers would be visible in the second and third quarter of the year. Management team also assumes that economic conditions will resume broadly by the end of the year and that there will be uncertainty from the businesses in most affected areas.

Moreover, they are expecting subscription revenues between $995 million to $1 billion in the second quarter and in between $4,125 million and $4,145 million for the full year.

Teladoc Health, Inc. is a virtual provider of telehealth services. Its virtual healthcare services incorporate a large number of medical subspecialties, including flu, chronic medical conditions, non-urgent, cancer, congestive heart failure, and respiratory infections. The Company provides services to businesses as well as consumers. Some of its consumer brands include Best Doctors, BetterHelp, Healthiest You, Advance Medical and Teladoc.

Last week, the Company priced Convertible Senior Notes worth $850 million (aggregate principal) maturing in 2027. It was conducted through a private QIB issue, and net proceeds would be around $829 million.

TDOC would use a portion of raised money to exchange its Convertible Notes Due 2022 with cash and shares. These notes have a principal amount of approximately $228.2 million, where the Company would pay ~$231.1 million in cash and 3.9 million in shares.

Its new notes due in 2027 have an interest rate of 1.25% per annum. The remaining proceeds would be utilised for general corporate purposes, working capital, merger and acquisition opportunities, and repayment of other obligations.

In late-April, the Company reported first quarter results for the period ended 31 March 2020. During the quarter, the business conducted 2 million medical visits across its markets, generating a total revenue of $180.8 million, up by 41% from $128.5 million in the previous year.

Do Read: Coronavirus: The Grey Or Black Swan?

(All currencies in USD unless or otherwise stated)