The COVID-19 outbreak has brought a radical change in the demand and supply function on the commodity front, especially for the consumption-based commodities, which in turn, has considerably impacted the ASX-listed resource companies and the overall sector, which is considered as the backbone of the GDP.

The resource sector accounted for 28 per cent of the domestic GDP growth in 2019 and represented 8.7 per cent of the total GDP for the same period. The Australian resource players largely export their product to China, which is the top-most destination of the majority of shipment from the continent.

Mining value-addition in the GDP surged by 1.8 per cent t in the December quarter to stand 7.3 per cent higher in 2019, driven by growth in coal, and base and precious metal mining.

However, the market anticipates that the contribution of oil and gas extraction, which remained the largest contributor to the mining industries value-added growth in the last few years, would decline ahead. 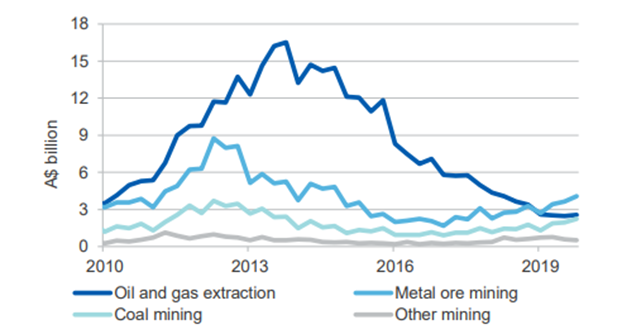 COVID-19 has impacted many economic activities across China, leading to a substantial fall in the overall export and shipment from Australia during the March 2020 quarter. Many of the global players have scaled-back production to balance the demand and supply dynamics of the commodity market; however, despite curtailment in the production, the weaker demand has impacted prices for many consumption-based commodities.

However, many industry experts are assuming that China’s economy would be back to normal by the second half of 2020, and these ongoing production curtailments across the globe would thereafter create a supply issue, which would largely drive price moves ahead.

As per the assessment of the Department of Industry, Innovation and Science (or DIIS), the Resources and Energy Export Values Index (OCE) surged by 7.8 per cent from the beginning of the year 2019 to March 2020 quarter. The plunge in commodity prices leads towards a decline of 4.2 per cent in prices, which was indemnified by a 13.1 per cent rise in volumes.

DIIS anticipates the 2019–20, resource and energy exports to stand at a record $299 billion due to higher volumes; however, the department also estimates that in real terms the export would be value at $265 billion in the wake lower commodity prices and strengthening home currency.

While the global commodity seemed to be responding to the ease in the Sino trade tussle and measures taken by several major central banks at stemming the impact of the U.S-China bilateral trade dispute. However, the COVID-19 outbreak has now severely impacted global economic activities.

However, DIIS anticipates major central banks to adopt a stimulatory monetary stance in 2020, which could support global activities ahead. Furthermore, the department projects the annual growth in China to drift lower but to remain above 5 per cent per annum.

The United States 2020 Presidential election on 3 November 2020 would have some impact on a number of resource and energy commodity markets from 2021.

Also, a rise in the count of nations determined to phase out the sale of internal combustion engine (or ICE) vehicles to reach net carbon neutrality could hamper the demand for oil and thermal coal; however, metals for renewable space, such as copper, nickel, silver, lithium, could have positive implications from the increasing stance of global economies to reach a net-zero carbon emission.

In the status quo, the United States President has again backlashed on China and has threatened to impose heavy tariffs, as Mr Trump held China responsible for the COVID-19 outbreak, and continued trade tensions pose a significant risk to world growth and resource and energy commodity trade ahead.

The Office of the Chief Economist’s (or OCE) Resources and Energy Export Volumes Index surged by 0.4 per cent during the March 2020 quarter as compared to the previous quarter and 13.1 per cent against the previous corresponding year. 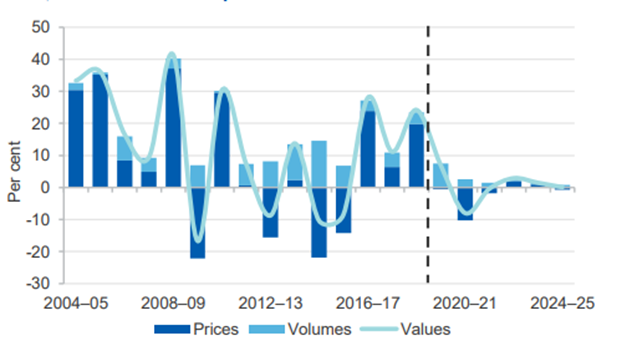 The DIIS anticipates that the commodity volumes surged by 12.3 per cent during the same period and expects the momentum in the export volume to continue in 2019-20; however, projects more tepid growth ahead.

On the major commodity front, the DIIS predicts that the iron ore prices, which previously soared to USD 120 per tonne and consolidated in the range of USD 81 to USD 97 thereafter, would fall during 2020 with ease in Chinese steel output and recovery in the supply chain from Brazil.

The department also anticipates that gold, which recently rose to a seven-year high in USD terms and to a record high on the domestic front, would witness a strong scrap supply and deter jewellery demand in price-sensitive markets such as India and China.

Post the announcement of the US-China Phase One trade deal in December 2019, the base metals market recovered substantially; however, prices declined thereafter on the back of the COVID-19 outbreak, especially copper and zinc.

To Know More, Do Read: Base Metals Out of Woods Poised for an Overnight Spike or Risk of Another Sell-off Remains?

In a nutshell, when the global resource community, especially the oil sector, is giving an early indication of a production pullback in the wake of weak global demand, and the market is currently responding more to demand factors rather than supply factors; however many subject matter experts anticipate that these pullbacks would later create a bottleneck in the supply chain, and prices would be determined largely by the supply factor over the long-term, and while that is said, Australia seems to poised for taking a leap in the market later with its large supply; however, it is projected to witness low prices for major commodities like iron ore, thermal coal, and LNG, which would keep a lid on export earnings ahead.