Coal prices have taken a jab in the international market, and the industry lies besieged over the global environmental concerns. The coal futures in the Chicago Mercantile Exchange (CME) dropped from its late 2018 high of US$78.05 (high in October 2018) to the level of US$54.05 (Day’s low on 9th June 2019), which in turn, marks a fall in coal prices of over 30 per cent.

The United States Energy Information Administration (or EIA) estimates that the coal production in the United States would notice a decline of 72 million short tons in 2019, which in turn, underpins a decline of 9 per cent from the previous year. As per the EIA, the lower domestic consumption would be the reason for the drop-in production.

On the Other hand, the Australian Department of Industry, Innovation and Science (or DIIS) estimates that post witnessing the weaker demand at the beginning of the year 2019, the demand for thermal coal would inch up in the third quarter of the year 2019.

However, over the longer-term, the DIIS also forecasts that the demand would primarily come from the developing economies such as India, while the developed nations such as the United States and Europe would witness a lower coal usage.

On the estimation front, the DIIS estimates that the Australian export of the thermal coal would mark a rise in volume but a fall in value until the forecasted period of 2020-21.

The EIA anticipates that the total coal production in the United States for 2019 would stand at 684 million short tons, which in turn, would mark the first time in 40-years a fall below the level of 700 million short tons.

The organisation estimates that the demand for coal in the United States would decline by 98 million short tons in 2019, which in turn, would mark a decline of 14 per cent as compared to the previous year.

Further consumption is forecasted to decline by 22 million short tons or 4 per cent in 2020.

The energy generation in the United States is anticipated by the EIA to witnesses a 24 per cent input from coal-fired power in 2019, which would mark a decline of 27 per cent as compared to the previous year.

The coal usage in the electricity generation Is witnessing a sharp decline and many industry experts believe that the coal share would drop substantially as the global economies shift their stance in line with the Euro 6 emission standards.

Apart from the lower consumption estimation, another factor, which is working against the coal in the market is the higher import restrictions imposed by countries like China.

Over such an outlook, many miners have drawn back from the coal business. Popular names on the Australian Securities Exchange such as Rio Tinto (ASX: RIO), BHP Billiton (ASX: BHP) have either exited the coal business or progressing towards it.

ASX-listed Iron ore behemoth- Rio Tinto divested from the coal industry in 2017 and another ASX-listed giant- BHP Billiton is looking to exit the coal business.

However, few core coal players on ASX, such as Whitehaven Coal Limited (ASX: WHC), who have enjoyed the high coal prices in 2018 are now moving towards the financial year-end, and the management of such companies are indicating towards the high dividend distribution.

WHC run-of-mine coal production for the quarter ended 30th June 2019 stood at 7,334k tonnes, up by 25 per cent as compared to the previous quarter production of 5,854k tonnes.

The company achieved the production guidance for the financial year 2019

The company realised a price of US$107 per tonne for the metallurgical coal sales in the financial year 2019.

The Maules Creek prospect of the company achieved the highest run-of-mine coal production of 3,798k tonnes for the June 2019 quarter, up by 30 per cent as compared to the previous corresponding period in 2018.

The Equity and Sales profile of the company for the quarter ended 30th June 2019 is as: 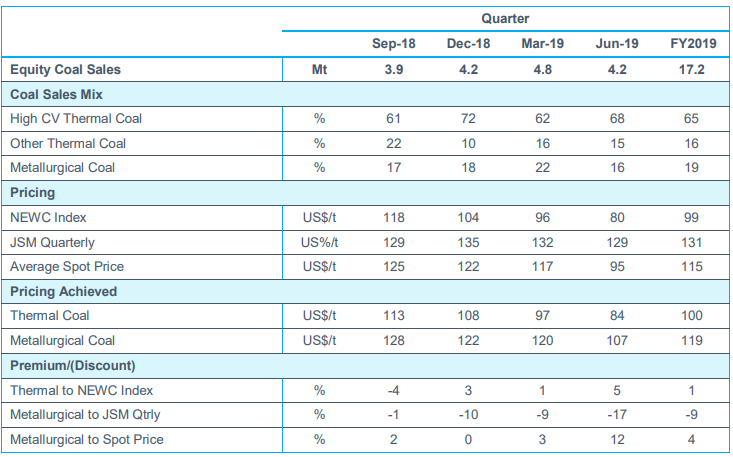 The share prices of the company ended the day’s session today at A$3.790, down by 1.044 per cent as compared to its previous close.