Climate Change Landscape - Renewable and EV Companies Can Be the Beneficiaries

Climate and environmental change are majorly a consequence of human inference on natural ecological processes, the most common of which is the industrial revolution. The balance between incoming and outgoing energy has been disturbed and has bothered the globe by winds, ocean currents and other mechanisms. Energy, today, is considered vital to attain development goals, in order to support an expanding economy, to bring electricity to countryside, to fuel the demand for greater mobility and to develop the infrastructure needs.

It has become a growing danger to the ecosystem and this quick change is making it problematic for species to adjust to the changes in temperature and has affected the life on Earth. However, the renewable and EV companies can benefit the environment as it can help generating the energy which doesn’t yield the greenhouse effect and reduce some type of pollution with an overall positive impact on the natural environment. Renewable energy technologies use conventional resources such as - sunshine, wind, tides, and biomass, from the environment to generate power. Renewable resources won’t run out, which cannot be said for many types of fossil fuels. Fossil Fuels, however, will be increasingly difficult to obtain, likely driving up both the cost and environmental impact of extraction.

Renewable energy has wider benefits for the community.

The benefits of renewable energy are of course twofold. Businesses can avail them by moving to more sustainable energy sources.

Let us now have a glance at how Renewable energy stocks are performing!

The company declared a dividend of  $0.0925 per share on GNE - ORDINARY FULLY PAID FOREIGN EXEMPT NZX which is to be paid on 31 October 2019 and also announced that the issue price for shares issued in lieu of cash for the 2019 Final Dividend under its Dividend Reinvestment Plan is NZ$3.2619 per share.

Genesis has enabled a more sustainable future and has cared for the environment as there were 143% increase in Whio and 714 pairs of these were protected. The company also aims to power New Zealand through 450 GWh per annum from 2021 through Waipipi wind farms which will offset 250,000 carbon. Producing a steady supply of New Zealand Unit carbon credits is the company’s primary objective.

Infigen Energy (ASX: IFN) is a leading participant to a clean energy future. It generates and sources energy, adds value by firming and provides customers with reliable clean energy.

During September 2019, Production Sold from the Smithfield OCGT was 5GWh. 25MW/52MWh battery at Lake Bonney, South Australia, achieved energisation and full AEMO registration in early October 2019 and is expected to be fully commissioned in H1FY20.

Infigen Energy declared a dividend of 1 cent per share on IFN - FULLY PAID ORDINARY/UNITS STAPLED SECURITIES which was paid on 27 September 2019. 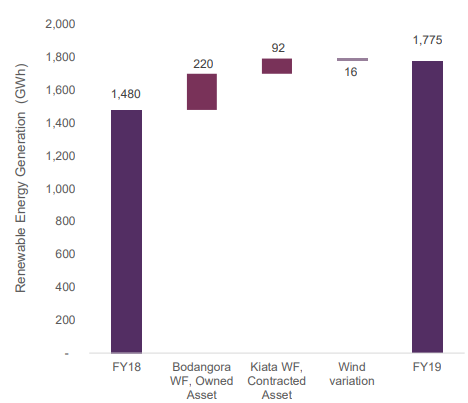