Recently, there have been noticeable delays by Chinese regulators regarding the approvals of new licences to Australian dairy and beef exporters, which aim to increase sales to China, and are the latest signs that diplomatic tensions are hurting trade with Australia's biggest trading partner.

Even when the existing licences are considered safe, some exporters seem concerned about securing new registrations from China, which are needed for new products to hit the Chinese market for the first time. Moreover, the Government of Australia has raised concerns about this to the Chinese authorities.

Coles Group Limited (ASX: COL) is also waiting for a licence approval to export high-quality beef cuts to China for its Retail Ready Operations (ROE) in Sydney. Because of the damage done to local pork supplies by African swine flu, these regulatory roadblocks arise despite soaring demand for meat exports in China.

On a YTD basis, the Australian beef exports to China were soared by 73% for the nine months to September but it seems like, the regulators are making slow progress in approving licences for new products and facilities from Australia and New Zealand.

Contrasting enough, it should be noted that the Chinese government granted licences to 25 Brazilian meatpacking plants in September 2019.

Let’s have a look at the company that is being affected by these regulatory hurdles.

Bellamy’s Australia Limited is an ASX-listed Tasmanian food brand business that offers a range of organic food and formula products for babies and toddlers, which are all Australian-made and certified organic. The company offers 40 products that are customised to the needs of babies and toddlers.

FY19 was a challenging year for the company due to regulatory delays, regulatory changes, a lower birth rate and increased competition for Chinese demand. In March 2019, the company transformed its business and relaunched Australia’s #1 Organic brand to return the business to growth and recapture the brand’s momentum. This was the most significant investment in company history, including:

The results from the most recent 6/18 ecommerce event was an important test and proof point. Sales for key platforms were up 41% year-on-year and brand ranking for cross-border formula improved markedly. BAL remains confident that this trend would continue, leading into the upcoming 11/11 Singles Day and 12/12 campaigns.

The Food business of the company rebranded early in September 2018, continues to accelerate. Second half sales increased +40% on the prior period and is quickly emerging as an important second engine of growth.

In FY18, the company completed a brand relaunch and portfolio review, increased investments in marketing and people capability, especially in China. It enhanced its quality and safety systems and processes which were designed to take Bellamy’s to another level and enable it to better fulfil its mission.

The company is in talks with one of China’s largest dairy companies, China Mengniu Dairy. The Board has unanimously recommended a proposed Scheme, under which Mengniu would acquire 100% of the issued shares of Bellamy’s for a total transaction price of $13.25 per share, comprising $12.65 from Mengniu plus a $0.60 fully franked special dividend paid by Bellamy’s prior to implementation of the Scheme.

The FY20 year is expected to see a step-change in China capability, marketing and brand activation, the launch of a leading product portfolio that would redefine the organic category and re-entry into the China offline channel through food and the Viplus arrangement and expansion of BAL’s emerging middle-class Asia strategy.

In FY20, the company’s revenue is expected to grow by 10-15% as compared to the previous year, mainly in 2H20 with planned product launches in Q3 for food and Q4 for formula. EBITDA margins are expected to be consistent with the prior year, reflecting continued investment in marketing and China capability. 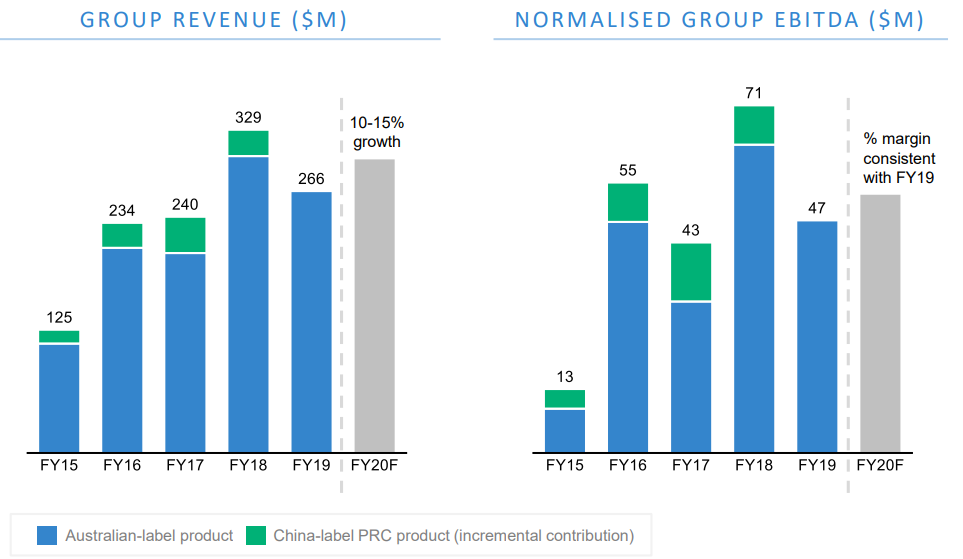