Lithium prices are taking a jab in the international market over the abundance in the supply chain; however, the lithium industry behemoths are relatively adopting a positive stance over the growth of the industry.

Over the production scenario, Australia has outperformed many substantial lithium producing countries such as China, Chile and Argentina. 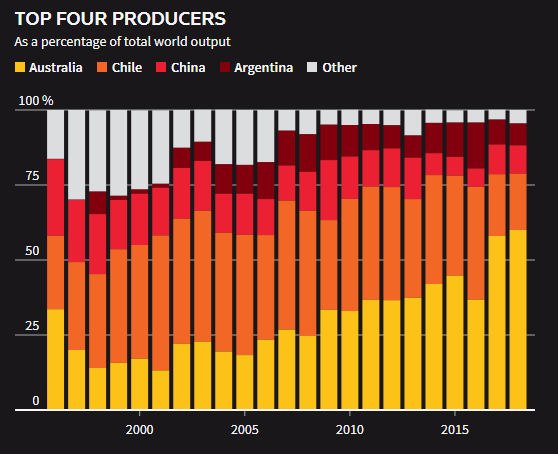 In 2018, Australia accounted for 60.0 per cent of the lithium global supply chain, which marked a 2 per cent rise in Australia’s share from its previous year contribution of 58.0 per cent.

However, apart from Australia, Chile has contributed significantly to the lithium supply side. In 2016 Chile accounted for 37.6 per cent of the global supply chain; however, considering the volatility of the demand and price dynamics, the Chilean Government adopted stringent policies, which in turn, reduced Chile’s share in the global lithium market to just 9.9 per cent in 2017.

Chile, albeit inched up its production to capture 18.8 per cent of the global lithium supply share in 2018, but the nation lost its competitive advantage against Australia. The lower output by Chile is majorly due to that fact that since the lithium price boom in 2014, the country has not permitted any new lithium mine.

Despite the lowest reserves used in 2018, Chile outperformed China and Argentina in terms of production in 2018. Which, in turn, marks Chile’s capacity to gain a strong position in the global supply chain amid its high and substantial lithium reserves.

In the 11th Lithium Supply & Market Conference conducted by Fastmarkets in Santiago, Chile’s Mining Ministry mentioned that it would engage both public and private investment to boost the country’s lithium production.

However, the problem with the current policy is that in Chile, the private investment could either venture with state-owned miners or could opt for a special permit known as CEOL. The ambiguity over the protocols to obtain the CEOL is the current problem in the nation.

But, at the conference, the ministerial representatives mentioned that the country would now promote the investment to take Chile’s production to 230,000 tonnes per year by 2023 in terms of lithium carbonate equivalent. 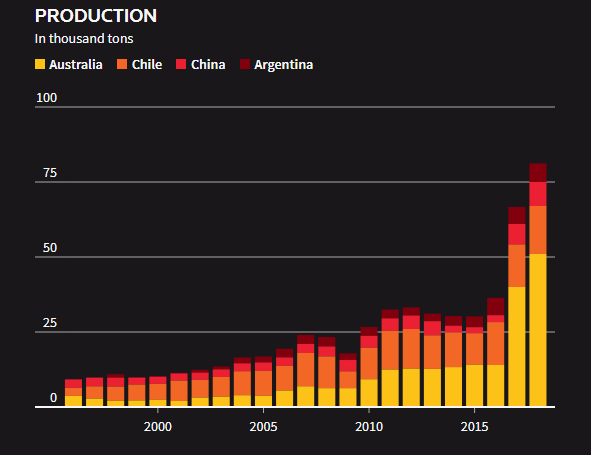 Chile production in 2018, stood at just 16.0 thousand tonnes, and the country is now targeting a higher output, which in turn, could further inch up the supply chain.

Despite current high production and possible upcoming addition to the supply chain, the lithium chemical players are banking on the higher demand to consume the abundance in the supply chain amid higher EV sales, and higher battery usage witnessed in the electricity storage industry.

As per the research conducted by the global lithium chemical giant-SQM, the lithium demand in the energy storage sector is expected to reach approx. 800,000 million tonnes, which in turn, marks an estimated compounded annual growth rate (CAGR) of 21 per cent. 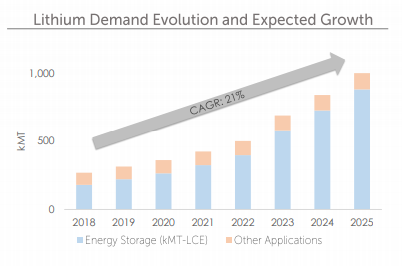 And, as per the company, the Lithium Hydroxide, which witnessed a slower than projected growth previously, is expected to capture the significant share in the industry by outperforming the demand of lithium carbonate in the lithium-based chemical industry.

However, the research undertook some key assumptions from 2017-2025, which are as:

The company is betting on government policies to promote the EV sector and the stance of various Original Equipment Manufacturers (OEMs).

PLS is engaged in the development of its wholly-owned Pilgangoora Lithium-Tantalum Project. In March 2019, the company completed a stage 3 scoping study of the prospect, which in turn, supported the downstream participation strategy of the company.

The key outcomes of the scoping study are as:

However, PLS further suggested that the partnering process would not mark an inclusion of the company’s interest in the POSCO JV, which is a ~40 kilotonnes per annum lithium hydroxide facility in South Korea.

If the company venture out in the lithium downstream process, and the predicted boom of the lithium hydroxide over lithium carbonate occurs, the POSCO JV could provide the company with a growth advantage.

The shares of the company last traded at A$0.555 on 2nd July, flat as compared to its previous close.

GXY is incorporated under the S&P/ ASX 200 Index, and the company hosts lithium production facilities across Australia, Canada and Argentina. The project portfolio of the company contains James Bay in Canada, which is a lithium pegmatite project in Quebec. Mount Cattlin mine in Western Australia, from where GXY shipped about 30,000 dry metric tonnes till 26th June 2019 in the second quarter. For the third quarter, a shipment of 15,000 dry metric tonnes is scheduled in July 2019 from the Mt Cattlin.

GXY is also engaged in the development of the Sal de Vida lithium and potash brine project, which is situated in the lithium triangle. As per the company, the Sal De Vida prospect contains a high potential of being a low-cost brine-based lithium carbonate project.

The company is strongly bullish over the lithium demand and intends to become a significant supplier of lithium products.

LPD is an Australian Securities Exchange listed lithium chemical developer and producer, and the company successfully produced lithium chemicals with its proprietary metallurgical process from non-conventional lithium sources such as mica minerals including lepidolite and zinnwaldite.

LPD can produce both low-cost lithium hydroxide and lithium carbonate, which gives the company an additive advantage over the peer group in the industry.

A 5,000 tonne per annum Phase 1 lithium chemical plant feasibility is underway, and the company intends to reach commercial production by 2021.

Also, on 28 June 2019, the company announced to the market about the merger of Desert Lion with LPD, this move could further increase the company’s capacity.

The shares of the company last traded at A$0.026 on 2nd July, unchanged as compared to its previous close.