Australia remains the star performer when it comes to the lithium supply chain; the country exported 1,376k tonnes of lithium by volume in 2018. Australia hosts 17 per cent of the world’s lithium and is till now the biggest exporter.

However, in the status quo, the position of Australia as the world’s largest lithium exporter is facing a risk amid lower production from the Australian lithium miners and higher production aimed by Chile government and Chile lithium behemoth- SQM.

The lithium market is currently oversupplied along with lower demand from the lithium chemical processors in China, and the recent stance of SQM and Chile to regain the lithium market share could bring more problems for beleaguered ASX-listed lithium players.

ASX-listed lithium miners such as Alita Resources, Galaxy Resources, Pilbara Minerals are all facing a reduced production for one reason or the other.

Alita Resources’ (ASX: A40) Bald Hall production rose strongly in March 2019 quarter and witnessed a 20 per cent rise against the previous corresponding quarter. However, the fall in lithium prices made it difficult for the company to operate the Bald Hill lithium mine as it faced financial challenges.

Galaxy Resources’ (ASX: GXY) Mt Cattlin lithium mine production also witnessed a 50 per cent reduction during the first half of the year 2019 as compared to the previous corresponding period.

Pilbara Minerals (ASX: PLS) voluntarily reduced the production at its Pilgangoora lithium mine as the demand from the lithium chemical processors in China nose-dived amid weaker global economic conditions.

Mineral Resources (ASX: MIN) has also kept the production guidance for its Wodgina project in shades amid a pending discussion with the Joint Venture partner Albemarle. The company recently flagged a lid on production as the lithium prices have fallen drastically.

The company also ceased a direct shipment of lithium ore from its flagship Wodgina project in September 2018 over the expectation of higher value spodumene concentrate.

While such significant prospects are witnessing lower production from the June 2019 quarter, the world’s second-largest lithium supplier-Chile is adopting policies to ramp up the inhouse production. 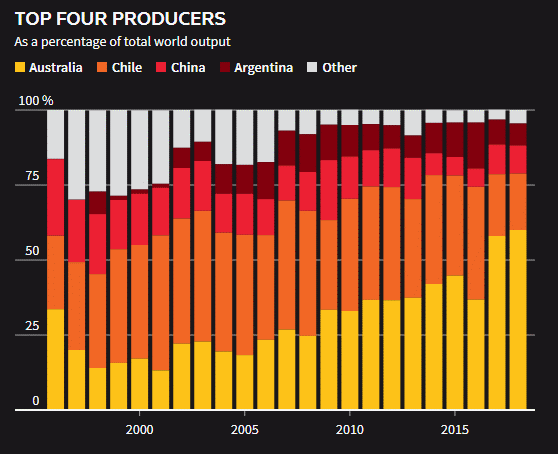 Chile, which accounted for 37.6 per cent of the global supply chain in 2016 lost the competitive advantage from Australia amid stringent measure adopted by the Chilean government, which further reduced Chile’s lithium supply share in the global market to just 9.9 per cent and 18.8 per cent in 2017 and 2018, respectively.

However, the Chilean government now plans to open the gateways for both public and private investment for the lithium project developments.

The decrease in opaqueness over the special permit known as CEOL required by the private miners demarcates the very first step, which is currently taken by the Chilean government to attract private investment.

The private miners in Chile have to either collaborate with the state-owned miners or else have to opt for CEOL to explore the lithium resources, the status of which previously remained ambiguous.

In the status quo, the government of Chile is adopting measures to inch up the country’s production up to 230k tonnes a year of lithium carbonate equivalent by 2023.

SQM- the Chilean Lithium behemoth also plans to capture back the lost market share over the coming years. SQM, which sold about 27 per cent of the world’s lithium in 2016, lost the market share rapidly to 17 per cent in 2018.

SQM To Roar Again Over the Lithium Space?

SQM in its quarterly address to the shareholders for the quarter ended 30 June 2019 mentioned that the company is increasing its production for the second half of the year 2019 as it plans to inch up the sales volumes to 65,000 tonnes next year.

SQM is currently working on an expansion plan, which will allow the company to reach the production capacity of 120,000 metric tonnes by the second half of 2021.

SQM further aims to reach the production level of 160k metric tonnes by the end 2023.

The roadmap from the company to regain the market share came in the middle of the price plunge, which has made the survival for many miners in the industry, challenging.

SQM itself faced significant losses over the fall in average realised prices for lithium; however, the higher volumes partially indemnified the lower lithium price impact.

The second-quarter revenue for the company stood at US$500 million with a net income of over US$70 million, down by almost 48 per cent against the previous corresponding period net profit of US$134 million.

Another problem which the Chilean giant offers to the Australian lithium miners is that the company holds 50 per cent of Kidman Resources’ Mount Holland lithium prospect in the lithium producing hub-Western Australia.

SQM would become a potential partner to Wesfarmers once the Perth conglomerate Wesfarmers completes A$776 million acquisition of Kidman.

China, which remained at the number three spot in the global lithium supply chain for over a decade, is adopting policies which are hampering the electric vehicle industry. Over the second quarter of the year 2019, the changes in timing and amount of subsidies provided by the Chinese government to the EV industry influenced the demand for EV.

SQM assessed that these changes have an impact on the current year demand of 3,000 to 4,000 metric tonnes of lithium; however, the company further assessed that the impact of these policies would not last long as the Chinese government is committed for the electrification of the vehicle industry.

China’s commitment towards the electrification of the vehicle industry is evident by the industry projected EV demand growth of 33 per cent for the current year.