In this article, we would discuss three stocks from the Casino and Entertainment domain. Collectively, these three stocks have a market capitalisation of over AUD 15 billion (as on 12 July 2019). One of the stocks had also updated on tapping the online market, and necessary agreements were completed. While the other stock is cutting to cost to increase profitability. Let’s look at some updates from these stocks:

Gaming & Entertainment giant, Crown Resorts Limited (ASX: CWN) is a Mid-Cap company and a constituent of S&P/ASX MIDCAP 50 and more. Mainly, the company is involved in integrated resorts sector. Therefore, it also contributes to tourism, training and employment in Australian region. Further, the company also have interests in the host of gaming businesses.

As per the release, CPH reported that a sale had been conducted to offload the holding in Crown Resorts, as CPH intends to diversify the investment portfolio. Also, the sale agreement with Melco enlists the aggregate purchase price- standing at AUD1.76 billion, which reflects AUD$13/share. Nevertheless, CPH remains to be represented on the Board of Crown Resorts. 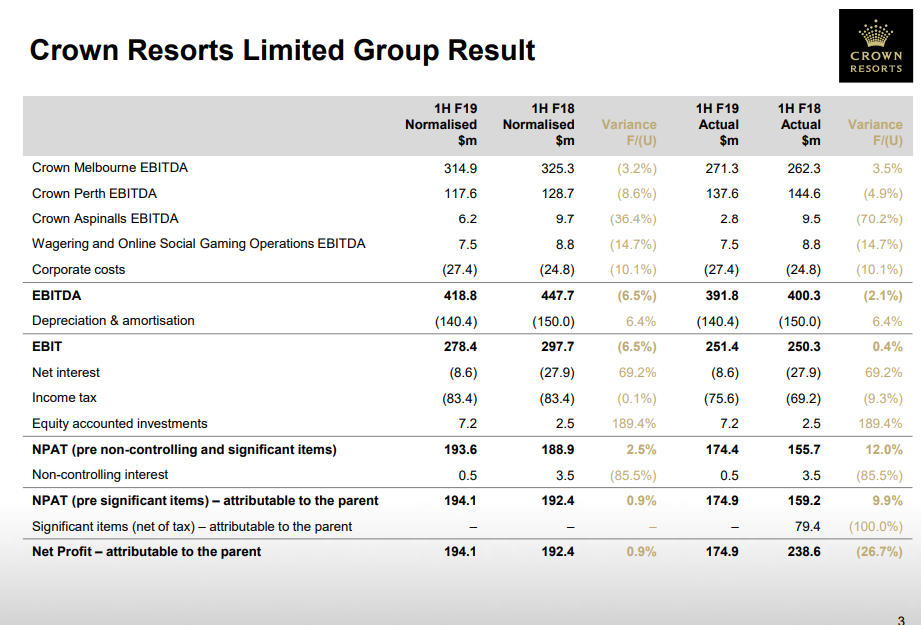 Meanwhile, CPH continues to be positive regarding the prospects of CWN along with world-class resort amenities in Melbourne and Perth region. Additionally, the future prospect of new Crown Sydney at Barangaroo appears promising to CPH; Crown Sydney is scheduled for the second half of the calendar year 2021.

The Star Entertainment Group (ASX: SGR) operates high-luxury hospitalities in Australia. It is a constituent of S&P/ASX 100, S&P/ASX 200, S&P/ASX MIDCAP 50 and more.

On 11 June 2019, The Star Entertainment Group released trading & earnings update for the period – 1 January to 8 June 2019. Accordingly, the group asserted that domestic revenue growth has subdued since the release of 1H FY2019 results.

As per the release, between 1 January and 8 June 2019, the domestic revenues were up 0.3% compared to prior corresponding period. Also, the International VIP Rebate business had repeated the fate from 1H FY2019, and the turnover was down by 31.1% in 2H FY2019. Subsequently, the group is expecting FY2019 normalised EBITDA in the range of $550-560 million range ($568 million in FY2018). Additionally, the FY2019 financial statements would be subject to the end of the year finalisation process(s) and an audit by an external firm. 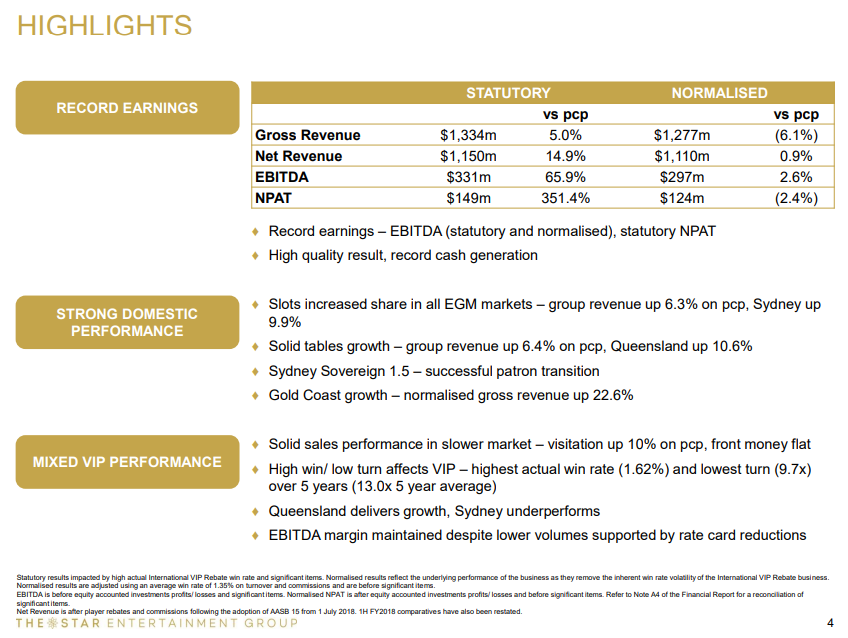 The Group asserted that domestic growth in 2H FY2019 depicts a blend of challenging macro-economic conditions persisting across the group’s market. In addition, the lower hold rates on table games in private gaming rooms (PGRs) along disruption from capital work at The Star Sydney has also added to the cause.

Previously, the group had notified regarding the centres of excellence in Gaming and Marketing allows the company to better off capability, decision-making and processes. Reportedly, these enhancements would enable to consolidate functions, and it would present an opportunity to capitalise of material cost saving within the customer facing functions and areas. Also, due to the persisting environment for revenues, such initiatives came in place to target cost savings of $40-50 million per annum with an expectation to achieve by the end of 1Q FY2020. Additionally, the company intends to provide an update at the FY2019 results regarding the anticipated impact and associated restructuring expenses recognised as important items in the FY2019 results.

As per the release, the excavation of the site was anticipated to finish in July 2019, consistent with project timetables. Also, the tendering for the next stage of the project was advancing to plan. Further, Multiplex was selected as the preferred contractor and terms were agreed for a lump sum contract for shell, core, façade and services consistent with the project budget. Moreover, the company expected Multiplex to initiate the work in July subject to final approvals. Importantly, if these works are awarded to Multiplex, it would represent around 60% capex of the project completed or contracted at a lump sum amount. Additionally, the group expects the awarding the remaining fit-out works by mid CY2020.

Reportedly, the first joint venture with Chow Tai Fook and Far East Consortium started construction on it, and completion remains on track for FY2022. Also, the second joint venture tower hosting a new five-star hotel and residences was announced. Besides, the construction is dependent on market conditions, level of presales of the residential apartments which commenced in May 2019, and subsequent approvals.

The group also provided an update on the expansion & upgrade of the Sovereign Resorts at The Star Sydney has been on track for mid-CY2020. In April-May 2019, the company also opened food and beverage venue, main gaming floor, entry lobby and the new porte cochere.

SKYCITY Entertainment Group Limited (ASX: SKC) is the largest tourism, entertainment & leisure entity situated in New Zealand region. The stock of the company constitutes to S&P/ASX 200, S&P/ASX 300 & more and is listed both on ASX and NZE. The Group operates an integrated entertainment business in ANZ.

In an announcement dated 08 July 2019, the group has confirmed the schedule for the upcoming FY19 full-year results. Accordingly, the conference would be starting at 12 PM noon NZ time (10 AM AEST) on 14 August 2019. The company intends to provide full-year results, updates on ongoing major projects along with strategic initiatives.

On 17 June 2019, the group  notified the market that it has changed its registered address, which is now at Level 13, 99 Albert Street, Auckland 1010, New Zealand. However, the address for service, mailing and phone numbers are unchanged.

On 22 May 2019, SKYCITY announced a partnership with international iGaming company Gaming Innovation Group Inc (GiG) through its Maltese subsidiary company, SKYCITY Malta Limited to provide an online casino gaming platform in New Zealand. Accordingly, the planned ‘skycitycasino’ is an online gaming site, anticipated to go live in the middle of this year, and it would function from Malta region. 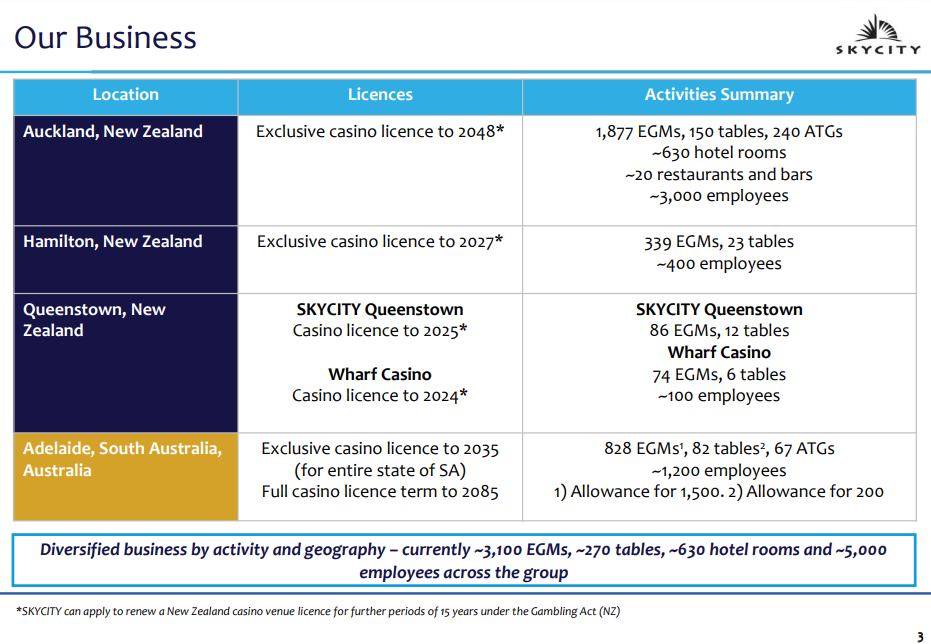 Graeme Stephens, Chief Executive of SKYCITY, stated that the site would offer best-in-class responsibility along with a brand renowned by New Zealanders. He talked about the gaming market in New Zealand, and suggested estimates of ~160 million a year is spent on the offshore casino platforms by New Zealanders. He also spoke about the GST in New Zealand and said the offshore operators do not have to pay the local gaming tax, country’s GST along with no compliance with the host responsibility practices followed by the land-based operators.

In addition, he extended the company’s support towards the Government to regulate the New Zealand online casino market through an appropriate licensing regime for operators while imposing taxes and obligatory host responsibilities requisites.

Mr Stephens also said the company would be making a quiet entry to the online gaming, and it also intends to not get engaged in marketing and sales strategies, which are adopted by the overseas operators in the domain.

On 12 July 2019, SKC’s stock last traded at A$3.8, unchanged from the previous close. The performance of the stock over the past one year and year-to-date periods has been +5.25% and +17.96%, respectively. Since late June, the stock is recovering from the losses made in May-June, and the three- month return has been +1.60% while the one month return stands at +5.83%.