Can You Be a Millionaire by Investing in Small-cap stocks? Look at Four Small-Cap Stocks

It may sound silly if someone says investing in small-cap stocks can make you a millionaire, but it is not. The growth potential of small-cap stocks is exceptionally well relative to medium-cap and large-cap stocks. As they enjoy a bigger room for future growth, they are usually considered as more attractive options by investors.

But do you know how can we identify small-cap stocks? The stocks of those companies whose market value is between USD 300 million to USD 2 billion are referred to as small-cap stocks. These stocks hold significant potential to offer explosive returns and provide considerable opportunity to beat institutional investors.

Some other reasons that induce investors to invest in small-cap stocks, include: 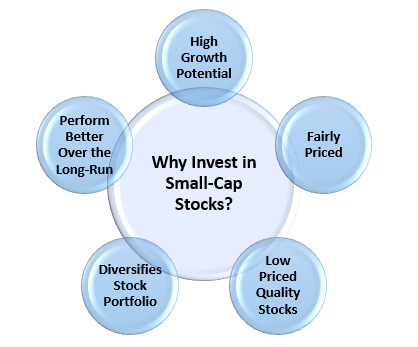 Let us make you familiar with some small-cap stocks listed on the ASX that are grabbing investors’ attention for different reasons:

A next-gen digital content leader evolved from a small online startup, Nearmap Ltd (ASX: NEA) has recently announced the acquisition of a technology and intellectual property for USD 3.5 million from Primitive LLC (Pushpin).

Below are the advantages associated with the acquisition of technology:

The latest acquisition is consistent with the Company’s commitment to speed up growth opportunities through selective and targeted acquisitions.

The Company released its FY19 results for the year ended 30th June 2019 in August last year, reporting solid portfolio growth over the year.

The Company observed a growth of 36 per cent in its Group annualised contract value (ACV) to $90.2 million and a rise of 45 per cent in its statutory revenue to $77.6 million in FY19. The global subscriptions and average revenue per subscription (ARPS) improved by 11 per cent and 23 per cent to 9,800 and $9,208, respectively.

An integrated manganese and silicon firm, OM Holdings Limited (ASX: OMH) has recently notified that its 100 per cent owned subsidiary OM (Manganese) Ltd has received approval for it to recommence in-pit mining operations at the Bootu Creek Manganese Mine. The mine is located near Tennant Creek in the Northern Territory and mines manganese ore.

The Company informed that the Northern Territory Department of Primary Industry and Resources has given the approval to recommence in-pit mining operations in a staged manner, with each stage subject to independent review and approval by nominated parties. Independent reviews have been conducted for discovered pits and approval has been given to commence mining in such pits. Mining has also begun in line with such approvals.

The mining operations were suspended at the Bootu Creek Manganese Mine in August 2019, subsequent to a fatal accident leading to the tragic death of a mining employee, Mr Craig Butler. Currently, the Company does not have any proposal for in-pit mining operations at the place where the accident took place, the Tourag Pit.

In August this year, the company reported a fall in Profit after tax for the half-year ended 30 June 2019 from $106.4 million in prior corresponding period (pcp) to $50.0 million. The fall in profit after tax was driven by weaker ore and ferroalloy prices, particularly ferrosilicon, which dropped by 23 per cent, with an estimated impact of ~ $43.6 million.

The Company’s revenue also dropped by 35 per cent from $828.3 million in pcp to $534.6 million, predominantly due to a global market softening of ore and alloy prices and lower total volumes of products traded.

Moreover, the company achieved an EBITDA of $109 million with even contribution from mining, smelting, and strategic investments.

The Company raised $165 million for organic growth and acquisition opportunities during the period. It was in a robust financial position with net cash of $194.8 million as at 30th June 2019. The Company’s net cash puts its business in an excellent position to take advantage of a pipeline of fascinating investment opportunities, both organic and acquisitive.

Moreover, the Company declared a final unfranked dividend of 4.8 cents per share, delivering a full-year dividend payout ratio of 70 per cent of FY19 NPAT.

Below are some key operational highlights of the Company for FY19:

The Company is well placed to continue its growth trajectory, supported by a broad suite of products complemented by enhanced digital solutions and several compelling acquisition opportunities.

Exploration and mineral development player, Aurelia Metals Limited (ASX: AMI) has recently informed that the Peak Mines near Cobar in NSW has received the necessary Work Approval under the Water Management Act 2000 for the commencement of groundwater extraction.

The approval follows the previous conditional approval received by Peak from the Cobar Shire Council to build and run a water pipeline that will supply groundwater to Peak’s existing operations from famous Great Cobar Copper Mine.

The Natural Resources Access Regulator has given the approval, allowing applications for the last two remaining administrative approvals to be commenced.

It is worth noting that the discussed companies are on track to tap tremendous opportunities in their respective areas. The companies are well-positioned to deliver decent performance over the period of time.