The Information technology sector is one of the fastest growing sectors in the world. The industry usually witnesses shifts at a rapid pace. Whenever there is an innovation in the industry, there is a significant change in the outlook for the industry.

With the emergence of artificial intelligence (AI), machine learning (ML) and cloud computing, the technology industry has a seen a big shift with more and more sectors looking to implement technology to streamline their relevant businesses and make them more efficient, both in terms of quality and time consumed. Information technology in electronic products industry includes companies that are in the business of computer hardware and software, operating systems, web-based information and applications, among others.

In Australia, the S&P/ASX 200 Information Technology had a strong 2019 with returns of 32.97% during the year. Within the sector, WAAAX stocks, which include WiseTech Global Limited (ASX:WTC), Appen Limited (ASX:APX), Altium Limited (ASX:ALU), Afterpay Touch Group Limited (ASX:APT) and Xero Limited (ASX:XRO), have been the standout performers. WTC, APX, ALU, APT and XRO have delivered impressive returns of 32.97%, 37.23%, 75.47%, 144.00% and 90.70%, respectively. WAAAX stocks, just like the FAANG stocks in the US, are the high-growing technology companies which are expected to continue growing and create value for their shareholders.

In the below article, we will be looking at one of the ASX-listed information technology companies and a part of WAAAX, Altium Limited, and deep dive into the growth prospects of the company.

Altium Limited is engaged in the development and sales of computer software for the design of electronic products. In 1999, the company got officially listed on the Australian Stock Exchange. Altium recently announced that Commonwealth Bank of Australia and its related bodies corporate have ceased to become a substantial holder in the company. Also, it has scheduled to release its half-year results for the financial year 2020 on 17 February 2020.

Let us look at how Altium has performed recently by looking at the company’s financial results in the year 2019. We will also throw light on how some product helped the company to reach decent operational performance.

During the financial year 2019, the Altium experienced revenue growth as well as expansion in its profit margins. The favourable financial numbers have proved to be a robust confirmation of the underlying power of the company’s "Line and Length" strategy. 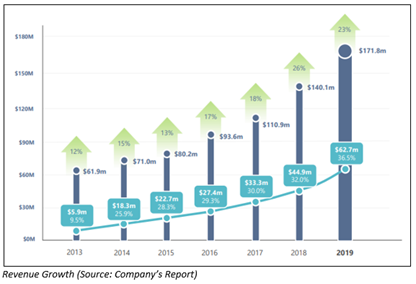 Also Read: How these two information technology companies are performing?

Altium places its business in terms of four zones, each with different investment and return profiles for the next phase of growth. It also outlined the following growth perspective for the future as follows:

While the company has made investors rich over in the past with an astronomical increase in share prices over the last five years, a similar return is uncertain given the high P/E ratio of the company. However, the company is on track to deliver impressive growth and could be in focus in 2020.