Australia has suffered a sequence of bushfire events since September 2019 across a number of states. This has been further aggravated by the problematic and protracted drought and extreme weather conditions. The ongoing events have been tagged as an ecological catastrophe, the gravest economic damage that Australia (and the world) has seen and an unprecedented fire season.

The bushfires have not only claimed the lives of humans and animals, but also destroyed thousands of structures and taken a toll on the Australian tourism industry. South Australia, NSW and Victoria have been largely affected, as the crisis is believed to have burned over 10 million hectares of land. Temperatures have soared over 40 degree Celsius and unpredictable winds have been constantly sweeping through a range of fire zones.

Bushfires - Why and How Much?

Let us quickly graze through the reasons that cause the Australian bushfires. This is a common widespread crisis across the region and is most likely to occur when the weather is in extreme conditions - very hot and dry. This is because higher temperatures are likely to break a fire that continues to burn. Even natural events like lightening are associated to bushfires.

Having said this, one should know that on record, 2019 was Australia’s driest and hottest year, paving a path for events that catalysed the bushfires.

However, some experts believe that there can be a human angle to the cause of bushfires. This includes fires in cars and trucks after road accidents, mishandling of cigarette butts or mismanaged campfires and so on.

Bushfires, and similar climate and weather challenges, cause wide-ranging and complex obstacles. Now, let us look at the estimated degree of damage that the fire has caused, according to WWF Australia, one of the country’s most trusted conservation organisations. 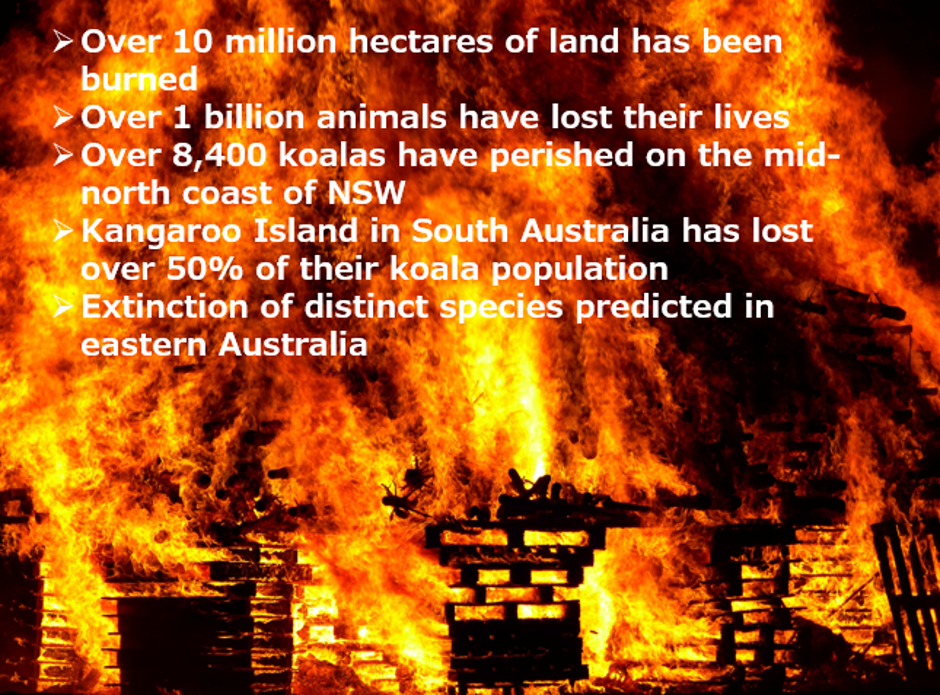 Who is helping Australia?

Governments, philanthropists, celebrities, NPOs and NGOs and individual businesses across the world have been pouring help in the form of cash, manpower, technologies, food and other necessities for evacuation camps.

The Morrison Government announced a comprehensive suite of measures to immediately support impacted regions and businesses, to help the sufferers of the direct fire damage, or those who have been indirectly economically impacted following the bushfires, to get back on their feet.

Grant funding, concessional loans, dedicated single contact points, tax relief and local economic development plans are few measures adopted by the Australian Government to help the country combat and eventually be out of the crisis. Recently, the Government declared a primary $76 million worth recovery package.

When it comes to calamities such as bushfires, the role of insurers is pivotal. According to the S&P Global Market Intelligence, Australian insurers are acknowledging the environmental costs and gearing up for increasing severity from the fires.

Insurers claimed to have received 13,750 bushfire-related petitions (as on 14 January 2020) with losses estimated at almost $1.34 billion. However, the country has suffered larger insured losses from bushfire in the past (the Black Tuesday of 1967 which experienced $2.2 billion worth of losses and the Ash Wednesday of 1983 which faced $1.8 billion worth losses in Victoria).

Therefore, the current bushfire crisis is looked upon as relatively less considerable as the previous ones (if witnessed from a reinsurance standpoint).

IAG is the largest general insurance company in Australia and has been focussing on home markets of Australia and New Zealand. The Company believes that the bushfires are one of the fastest growing climate risks in Australia.

IAG reported to have received over 7,000 claims related to bushfires (since September 2019). The company is likely to log $400 million in natural catastrophe losses (beyond $320 million it had budgeted).

As of 3 January 2020, IAG estimated $160 million in losses from the entire bushfire event in 2020 (just the first half). By the same date, it had obtained around 108 business interruption claims.

Meanwhile, the Company claims to have been able to offset the concentration risk via application of reinsurance capital, a significant part of IAG’s total capital platform in the last few years. Recently, the Company boosted its gross reinsurance protection, worth up to $10 billion for CY2020.

In the future, IAG expects to witness both soared severity and frequency of major disasters, given the rising temperatures.

Another leading financial services provider in Australia and New Zealand, SUN reported to have received over 2,600 claims related to bushfires since September 2019, with total estimated losses of $315 million to $345 million, as of 9 January 2020.

The Company is expected to conduct a scenario analyses over the next year to recognise the definite and potential impacts of climate change on its business and community.

The above-mentioned two insurers have halted insurance policy sales in certain parts of Victoria and NSW (areas affected by bushfires) and have no immediate plan to issue non-renewals (of homeowners’ policies).

With global support pouring in, Government incentive supporting Australia’s tourism and hospitality industry and domestic insurance companies doing their bit, Australia needs hopes and prays to overcome the bushfire crisis to get back to normalcy.

GOOD READ- Australian Retailers Contribute Towards Bushfire Relief, But Will The Fire Impact Their Sales?