BP's Lens On The Future Of Oil

Oil will continue to catch a significant chunk of energy till next 20 years says BP, one of the world's largest oil producer. The report offers clue to the company's strategy to tackle reduce the carbon emissions with in-line as per the goals of the Paris climate accord. As per the BP annual energy outlook of 2019, oil demand will be strong for the next 20 years even if the ambitious targets set in the Paris Climate Change accord are met and adopted. In a rapid change in economies from fossil energy to renewable energy the oil demand will drop only 20% by 2040 even with the use of renewable energy and electrification of transport by various industries and yet if the bold actions were made to curb the carbon emission oil will still meet half of the world's energy demand. In the rapid transaction to a low carbon world, the carbon dioxide emissions would drop to 45% by 2040, but this would require a revolution in technology for carbon capture, usage, and storage.

The primary energy consumption will mark a steady increase in oil and an exponential increase in renewable energy. The transaction to a lower-carbon energy system would continue with natural gas and renewable gaining grounds relative to oil and coal. As per the forecast by BP the renewable and natural gas would account for almost 85% of the growth in the primary energy segment and oil increases during the first half of the outlook albeit at a much slower pace than in the past before spiking again in the 2030s. The coal consumption is broadly flat with its importance declining in the global energy system.

As per the outlook, the consumption of liquid fuels grows over the next decade, before broadly plateauing in the 2030s. 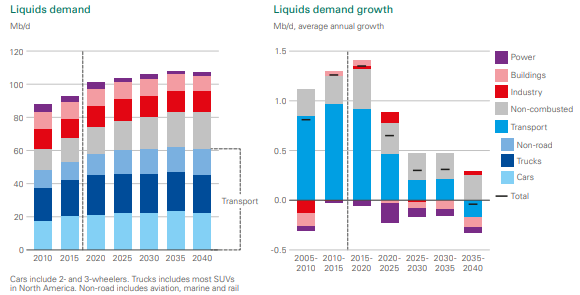 On the supply side, the growth in liquid supply is initially dominated by U.S. tight oil(shale oil), with OPEC production increasing only after U.S. tight oil declines.

As U.S. tight oil declines, this space is filled by OPEC production which is aided by OPEC members responding to the increase in global oil resources and the action taken to reform OPEC members economies and reducing the dependency on oil that will gradually allow them to adopt a more competitive strategy.