PE Ratio: The price to earnings multiple is one of the widely used ratios by the market participants. It is used as a relative valuation technique to detect the relative value of the stock in comparison to its peers. A high PE is generally an indication of the stock being traded at higher prices or overvalued and vice versa. Momentum and growth investors usually look at companies with high PE with the probability of high PE to sustain. The companies with higher earnings growth, higher operating metrics like gross margin, EBITDA margin, or Net profit margin etc. command a higher PE.

A low PE stock is usually found among the universe of stocks that are currently in downtrend due to a temporary/permanent business issue. Value investors look for stocks with low PE ratios with the anticipation of a turn around and hence a PE re-rating.

The three stocks Vita Group Limited (ASX: VTG), Adairs Limited (ASX: ADH) and Propel Funeral Partners Limited (ASX: PFP) in the consumer discretionary space have yielded decent YTD returns. These stocks are currently trading at a PE multiple range of 10x to 11.5x, trading at the approximately lower level as compared to the average industry peer multiples. Let us have an overview of the financial and stock performance of the three companies.

Vita Group Limited (ASX: VTG) is engaged in the retail business and consumer discretionary space. The company enhances its customers' way of life through expert consulting and value creation across a diverse network of brands.

The Vita Group Limited recently announced its expectation of FY19 earnings before interest, tax, depreciation and amortisation (EBITDA) to be in the range of $45 million to $46.5 million, subject to year-end completion and audit, which represents a growth of 10 to 13 per cent compared to the prior year from FY18. This expected result reflects strong performance in its Retail ICT and Sprout accessory businesses.

On the financial front, the company's performance during the first half of 2019 remained strong. The revenues for the period stood at $377.0 million, an increase of 14.0% on FY18. The increase in revenues was driven by strong performance in connectivity and devices, innovation in accessory brand SproutTM, non-invasive medical aesthetics (NIMA) starting to scale and SQDAthleticaTM gaining momentum. The EBITDA of the company stood at $25.0 million, an increase of 25.0% on H1 FY18. The EBITDA growth was driven by Retail ICT and SproutTM significant growth, labour productivity gains and small but positive NIMA contribution.

The company maintained a strong and flexible balance sheet with a cash balance of $17.2 million, along with strong cash generation and disciplined investment. The company maintained a strong dividend growth. There has been an increase in the interim dividend of 11.0% to an interim dividend of 5.2 cents per share in 1H FY19 as compared to 4.7 cents per share in the prior corresponding period of 1HFY18.

Adairs Limited (ASX: ADH) is into the business of homeware retailing and furnishings in Australia, with core or staple as well as fashion and decorator product categories. 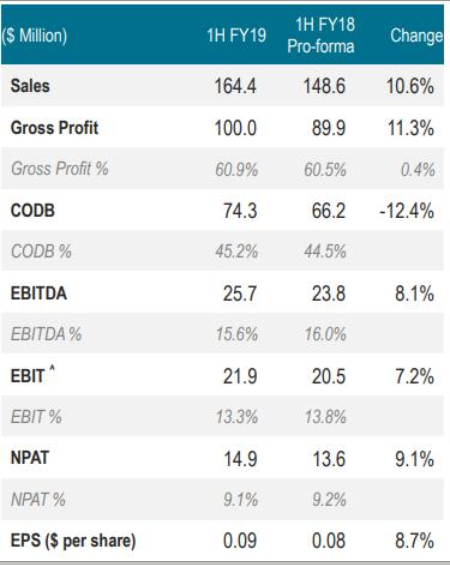 As per the half-yearly performance of the company during 1H FY19, the total sales went up by 10.6% to $164.4 million, with a like-for-like sales increase of 7.3%. The total store count for the period stood at 166 with four new stores, two upsized, four refurbished, and five closed (including 3 Myer concession stores). The online sales continued to grow strongly, with sales up by 42% to $24.3 million (comprising 15% of the total sales).

The company delivered 9.1% increase in the net profit after tax to $14.9 million during 1H FY19. The company’s growth over the first half, despite a weaker housing market, shows its focus on delivering a great product at reasonable prices, along with a relatively low average transaction value, which places the business well to weather a continuously changing market.

The company maintained a strong balance sheet, which has strengthened further during the first half of FY19. The balance sheet is well equipped to support the company’s growth strategies and provides the flexibility to respond to opportunities and challenges as they emerge. The company’s net debt reduced to $10 million, with the gearing ratio (Net debt/ LTM EBITDA) down to 0.20x as compared to June ‘18 of 0.24x. The operating cash flow for the period was down 11% to $18.9 million, mainly driven by increased investment in inventory to support sales growth.

The solid cash generation, strong balance sheet and a positive outlook for continued growth has motivated the Board to review its dividend policy, widening the target payout ratio to 60% to 85% of net profit after tax. The Board of Directors declared an interim dividend of 6.5 cents fully franked, up 18% from the prior corresponding period, representing 72.4% of net profit after tax.

Propel Funeral Partners Limited (ASX: PFP) is a death care service provider. It is the owner of funeral homes, cemeteries, crematoria and related assets in several parts of Australia and New Zealand.

The company recently completed the acquisitions of the Morleys Group, Waikanae Funeral Home and the Kaitawa Crematorium. It has issued 344,828 ordinary shares to multiple vendors, all of which are subject to voluntary escrow arrangements for up to 36 months from the date of announcement (5 May 2019).

Looking at the company’s outlook for the remainder of FY19 and beyond. The company is well placed to benefit from the acquisitions completed during FY18 and 1H FY19, proposed acquisitions announced in 1H FY19 and those subsequent to 31 December 2018, other potential future acquisitions (although the timing is uncertain), and funeral volumes reverting to long term trends.

The company expects the funeral volumes to cycle through weak PCPs during 2019. However, it is encouraging that the comparable volumes were up during the first seven weeks of 2019, while the death volumes will fluctuate over short time horizons. The conservative balance sheet and strong operating cash flows of the company should provide financial flexibility to support potential future dividends and growth initiatives, including acquisitions.