The oncology therapeutic area is still looking for a breakthrough treatment that will establish itself as a go-to-treatment for treating malignancies. Making its way through, a novel cancer immunotherapy treatment has surfaced that provides relatively quick results through one-time potential treatment and increasing the chances of survival considerably.

Biotech player Selvax Pty Ltd, engaged in cancer immunotherapy treatment, is preparing for human clinical trials and aims to launch an IPO in the next six months, i.e. H2’ 20. Let’s dig dipper to understand how the Company is positioned to fare in the market.

The Selvax research team at Curtin University’s School of Pharmacy and Biomedical Sciences reached a breakthrough in the treatment of cancer by working on the body’s anti-tumour immune response ability (self-vaccine cancer immunotherapy or Selvax). The team combined two immunological agents IL-2 and anti-CD40 antibodies to be injected directly into the tumour achieving complete regression of large tumours without toxicity. The immunological agents were both approved for use in humans and worked on tumours that were resistant to chemotherapy and to each agent when used alone.

So far, Selvax’s immunotherapy methodology has been successfully tested for various solid tumours in animals showing promising results. The therapy functions like a vaccine against cancer recurrence and destruction of other tumours in another part of the body. The dose will be administered through an intravenous delivery system (liposome-based) which has been developed and tested by Selvax in partnership with Australian National University’s head of research group.

The Company, together with Perth vet oncology clinic, is currently running a phase two trial treating dogs with soft tissue sarcomas. Tumours common to both humans and dogs are identical, making dogs an idle choice to be used as a proxy for human cancer trials. The first ten dogs administered with the lowest dose showed a 30 per cent cure rate. The highest cure rate as recorded at 90 per cent for a colon cancer treatment. 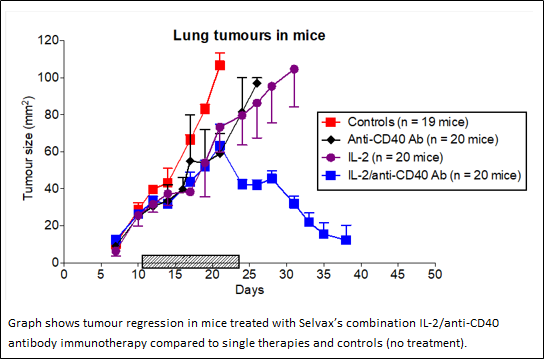 Selvax has also established its treatment as better therapy against three FDA approved inhibitors curing all tumour type but one.

The biotech player also secured a principal contract with a leading European oncology institute to perform the first human study of the Company’s treatment in cancer patients.

According to clinicians, the therapy has the potential to surpass chemotherapy and establish itself as a standard of care that works on the entire immune system of the body enhancing its ability to fight malignancy occurring at any part of the body.

The need for an Initial Public Offering

Selvax Pty Ltd owns the Selvax technology. The Company is jointly owned by Australian private investors and the Curtin University. The Company is eyeing an IPO to facilitate its business goals such as moving into human trials in 2021.

The Company also has set a few commercial strategies to augment its business, such as:

Different cancer immunotherapies using different modality such as T-cell therapy, Immune checkpoint inhibitors, cancer vaccines, and monoclonal antibodies are currently in practice for the treatment of various malignancies and providing substantial benefit to the cancer patients. As a result, the industry is gaining traction and offers an opportunity for multiple stakeholders to rake in big money.

Selvax is expected to face a stiff challenge from several Australia-based, ASX-listed biotechnology companies such as Imugene Limited (ASX:IMU), Immutep Limited (ASX:IMM), Invion Limited (ASX:IVX). These players are engaged in providing treatments based on the unique immunotherapy platform by building the body’s immune system against cancerous tumour.

Selvax is operating is an industry which is yet to see a well-established anti-cancer treatment. An IPO will provide the Company enough capital to expedite its go-to-market strategies and leverage on its dual therapy technology (IL2 + anti-CD40 agonist) indicated to treat malignant tumours through immunotherapy.