The US earnings season is here, company books are out in the open, and investors have got some work to do.

But what are we here for?

We bring into light two stocks out of the most talked-about stocks on NASDAQ, AMZN and MSFT.

Headquartered in Seattle, Washington, Amazon.com, Inc. (NASDAQ: AMZN) is amongst the most popular worldwide for its online retail business. However, Amazon delivers into multiple businesses through electronic book readers and Web services that were a breakthrough in the electronic commerce industry.

Amazon is a large-scale internet-based company reaching millions of customers worldwide. Amazon has expanded significantly over the years and multiplying its business into multiple verticals by selling sells books, music, movies, housewares, electronics, toys, and many other goods, either directly or as a catalyst to other retailers on its website.

Amazon recently notified on financial report for the third quarter (closed 30 September 2019) on 24 October 2019. Notable financial highlights from the companyâs quarterly performance are given below:

As per the forward-looking statement of Amazon for the third quarter 2019, net sales were expected to grow between 17% and 24% (between $66.0 billion and $70.0 billion) as compared to the third quarter of 2018. The company is clearly on track with the anticipated growth objectives, signifying amazonâs commitment to operational excellence. 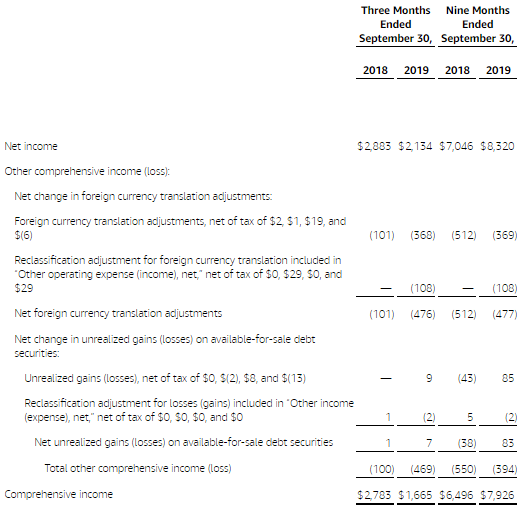 Moreover, the CEO believes that it is a huge investment, but the company is focused on the long-term decision for its customers.

The expectations of Amazon as of 24 October 2019 are given below (subject to substantial uncertainty):

Other than the improvement in sales, Amazon has been equally focused on improving its product line and services. As a result, Amazon announced various additions to its product and service portfolio including-

Paralleling, with its principle of âcustomer obsession rather than competitor focusâ, Amazon made several announcements under its Amazon Web Services vertical. âPassion for inventionâ and âcommitment to operational excellenceâ are other core principles of Amazon.

These are evident from the long stretching range of products developed by the amazon, coupled with a big appetite for innovation and technological enhancements.

Let us now talk about the global tech giant Microsoft.

As a global tech giant and a leader in software systems and applications development, Microsoft Corp. (NASDAQ: MSFT) believes in creation of a technology that brings benefits to everyone on the planet and the planet itself. Microsoft strives to inject productivity, competitiveness, effectiveness and efficiency into other business partners through its products and services.

As per the earnings report for Q1 FY20, Microsoft has continued its revenue-streak and experienced a 14% increase in its revenue. The revenue for the quarter amounted to $33.1 billion. On the operating income front, NSFT attained a figure of $12.7 billion, which represents an increase of 27% as compared to the corresponding period of last fiscal year.

Microsoft has endured tremendous progress and has been strengthening its impact over the past years. Microsoft provides leverage to other organizations of every size and in every industry globally, to innovate and prosper using Microsoftâs products and services.

Moreover, Microsoft is continuously innovating to enable its customers and investing in large and growing markets to catalyse their digital transformation. Some of the technology breakthroughs that Microsoft looks forward to are:

Other than product innovation, enhancement and delivery, Microsoft also addresses much sensitive areas of customer relations. Microsoft feels highly responsible about gaining and enduring the trust of its customers and partners and focuses on managing their privacy and cybersecurity.

We have got Microsoftâs financial performance and operational achievements covered here.