The world economy in 2019 was noticeably slowing due to aggravating trade tensions, political risks and stagnated economic output, that hammered business confidence.

However, recently two big footraces have noticeably cleared, which has given a sigh of relief to economists and businesses, even though minutely- the firmer footing after the US and China hit a partial trade deal and a settling outlook for Brexit (finally!).

These two factors have economists believe that the haphazard world economy of 2019 would stabilize into 2020 after a recession scare.

But what is happening closer to home in Australia? Let’s find out!

The 2019-20 Mid-Year Economic and Fiscal Outlook

On 16 December 2019, the Federal government released its Mid-Year Economic and Fiscal Outlook (MYEFO), wherein it has sharply downgraded the fiscal outlook.

This economic outlook, softer than anticipated in the Annual Budget, entails the below observations: 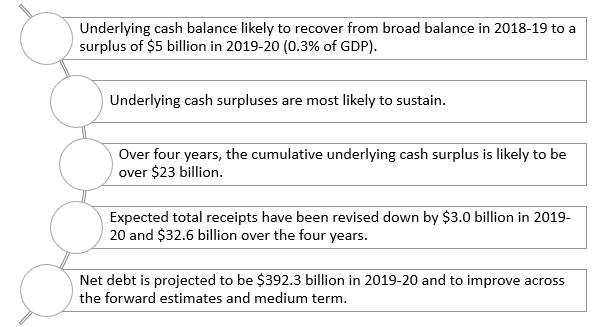 What Does The Updated MYEFO Illustrate?

Before diving into the catalysts and consequences of the updated MYEFO, it is important to understand the current stance of Australia’s economy.

GDP annual growth is 1.7%, unemployment rate is 5.3%, and wage growth is 2.2% - all less than forecasted. This depicts clearly that the Australian economic growth is challenged on several fronts. Not to forget the rising population growth and growing climatic concerns encompassing every country alike.

The updated MYEFO clubs all the triggers worrying Australia currently. For instance, it is linking drought and bushfires to falling farm production; and economists are also worried about a dramatic slide in iron ore prices.

The economic growth slash is a concern to the continued downturn in the country and a looming fear of recession.

However, emphasizing a ray of hope amid lower farm production and exports, experts believe that the country’s economy continues to show resilience in the face of weak momentum in the global economy as well as domestic challenges. The Outlook confirms that the budget is heading in the right direction to return to surplus - projection made for the first time in almost twelve years.

On the brighter side, one should be aware of the fact that GDP growth in the initial three quarters of FY19 was robust when compared to the second half of FY18. The labour market is resilient enough while the domestic demand is likely to pick up.

Moreover, the Australian Government’s fiscal scheme along with a $100 bn Infrastructure Investment Scheme are expected to provide immense support to the overall economy.

One cannot ignore few historic events that took place in Australia this year- personal income tax relief, an upsurge in spending on infrastructure at every levels of the government and the consecutive decision by the Central Bank to keep lower interest rates.

A tenacious recovery in the housing market, after a major property plummet is expected to support consumption and dwelling investment.

The Australian Government is investing a further $4.2 bn (over the forward estimates), as part of the its total transport infrastructure investment over the next decade. There are around 130 major projects which are under construction and are funded by the Government. Further, NSW and The Australian Governments are thriving towards delivering a $1 billion water infrastructure package exclusively for regional and rural communities.

The Government is also handling regulatory congestion and aiding businesses to invest and create new jobs which will help boost employment in the country. The Australian Business Growth Fund is expected to have around $540 million to make equity investments in SME’s.

The Government is offering substantial assistance and concessional loans to those impacted by drought with approximately $1.3 billion in additional support. The Government will provide ~$624 mn over four years to respond to the Interim Report of the Royal Commission into Aged Care Quality and Safety.

Uncertainty around global trade policy, Brexit and financial fragilities have remained elevated over much of 2019. Investment growth has, hence, been below average in 2018-19 in China, the US, Korea and some ASEAN economies.

Global economic momentum has deteriorated since PEFO, which has directly wedged trade actions on trade flows, including the extensive supply chains in East Asia.

The elevated uncertainty from trade and technology tensions, Brexit, and financial instability in Italy, Turkey, and a number of South American countries has weighed on business confidence and investment intentions paving the way for the Global growth estimation of 3% in 2019.