Bauxite, a natural product of weathering, is a major source of alumina production, which is further used to extract primary aluminium. Australia is the world’s top producer of bauxite and captures a significant share of the global bauxite supply chain.

While the aluminium demand is supporting the bauxite demand, the Australian Department of Industry, Innovation and Science (or DIIS) anticipates that the global production of bauxite would grow with an annual average rate of 2.0 per cent in 2020 and 2021 to reach the level of 380 million tonnes by 2021.

Many industry experts anticipate the growth in the bauxite production over the coming years amid additional production capacity from Australia and Guinea. Guinea has developed its bauxite resources rapidly over the last few years and is estimated to surpass China in terms of production to become the second-largest bauxite producer.

On the demand front, China is actively securing external bauxite resources over its increased aluminium smelting capacity and alumina refineries. The domestic market in China is currently experiencing supply tightness in inland regions.

The tighter environmental policies in China is keeping the production of bauxite in check, which in turn, is prompting the smelters and refineries to secure external supply; and, when it comes to an external supply, Australia is the key takeaway market for China.

As per the DIIS estimation, Australian bauxite production capacity increased by 6.0 per cent in 2018-19 to reach the approximate level of 101 million tonnes amidst new capacity addition from Rio Tinto (ASX: RIO). Rio additional capacity comes from its Amrun bauxite project and Metro Mining’s Bauxite Hills prospect in Queensland. 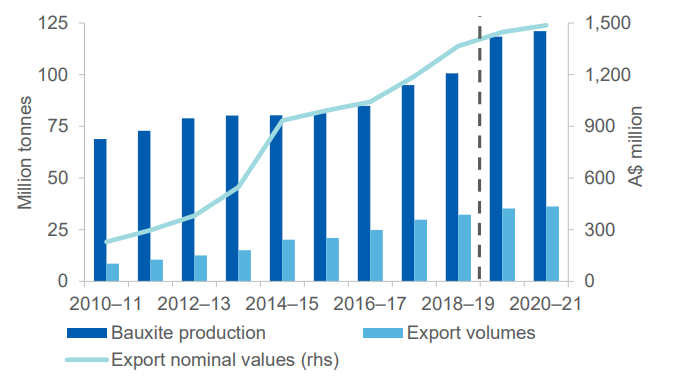 Over the increased production and export from Australia, the local miners could leap ahead and take advantage of high bauxite demand in China.

ABX is an Australian Securities Exchange-listed bauxite explorer, producer and miner. The company operates in various bauxite geographical areas in Australia such as Queensland, New South Wales (or NSW) and Tasmania, and hosts about 30 bauxite tenements which exceed over 5,000km. The project portfolio of the company includes Binjour, Goulburn, and Tasmanian Projects. ABX currently operates a bauxite mine at the Bald Hills.

The wholly-owned subsidiary of the company- ALCORE Limited commenced the downstream processing of the company’s bauxite into aluminium fluoride after removing silicon and iron oxides. The company’s subsidiary achieved the separation at ALCORE’s research lab in Berkeley Vale in New South Wales, and now ALCORE’s primary target is to design optimum blend of bauxite and reagents for its mini plant.

The growing aluminium smelting in China could also provide some advantage to the company if the company successfully commercialises the processing on a large scale and secures the offtake agreement.

The co-product derived during the processing of bauxite into the aluminium fluoride, i.e., Corethane is a pure hydrocarbon powder refined from low-value coals has many industrial applications. Corethane also contains less-sulphur and could be used as a bunker fuel in the maritime industry.

The IMO 2020, which requires the vessels to use sulphur-free bunker fuels could be beneficial for the company if ABX decides and succeed to commercialise the by-product of its downstream bauxite processing on a large scale.

The company’s subsidiary is currently working on the business strategy of producing aluminium fluoride for the aluminium smelting industry and producing corethane for industrial use.

ABX recently produced and loaded 32,477 tonnes of bauxite for the shipment at the Bell Bay Port, which is near about 8.26 per cent up from the contract target lower range of 30,000 to 33,000 of cement-grade bauxite.

The company also secured contracts for fertiliser-grade bauxite and is presently working over increasing the maximum ship-size of 75,000 tonnes at the Burnie Port is Tasmania.

This project of the company is in the Solomon Islands, and as per the company, the prospect demonstrated potentially high-grade direct shipment ore (or DSO). PBX has identified initial priority targets over the prospect.

PBX initiated court proceedings against the decision of the Minister of Mines, Energy and Rural Electrification’s, which rejected the company’s Prospecting Licence for the Nendo Bauxite Project PL 01/16. PBX applied for the licence through its Joint Venture company- Eight South Investment Pty Ltd.

In April 2015, the High Court ruling declared the Minister’s decision null and void. The company is further proceeding according to the court rulings and is currently considering bits of advice.

PBX entered into an agreement with Cylinder Cove Pty Ltd (or CCPL) in April 2019 for the sale of its residual interests in the Mt Richardson, Rogetta and Golden Camel projects in exchange of milestone payments & royalties and consideration of A$1.5 million.

The Mt Richardson project royalty deal included a 2 per cent royalty on average/tonnage Free-on-Board sales value of iron ore product that departs the company’s exploration tenement E29/571 along with a one-off payment of A$0.50 per dmt on tonnages above pre-evaluated 10,000,000 tonnes of Indicated and Measured Resources.

PBX would receive a royalty of A$2 per tonne on all gold mined after the initial production of 20,000 ounces. The company received an immediate non-refundable payment of A$5,000. The company initially allowed 45 days for due diligence to CCPL, which the company decided to extend in May by further 30 days, and post that PBX further extended the period by 30 days in July 2019.