Australia's Biggest Brick Maker, Brickworks And Its Acquisitions Across The Globe

An essential building material, brick is usually utilised to build walls, pavements and other construction activities. Bricks are produced in different types, classes and materials which varies across the regions. The Clay Brick Manufacturing Industry has shown unstable revenue over the past five years period in Australia due to fluctuations in dwelling commencements, which strongly influenced the industry's performance. Strong dwelling commencement numbers fuelled industry growth at the beginning of the period. However, a downturn in new dwelling commencements over the past four years has driven the decline in the industry’s revenue over the same period.

Building activity Bricks has been predicted to continue being swapped with other types of construction materials across the upcoming five years period. The major companies engaged into Clay Brick Manufacturing business in Australia are Brickworks Limited, CSR Limited, and Boral Limited.

Let us now discuss Brickworks Limited and its updates:

Brickworks Limited headquartered in NSW, Australia, is engaged in distribution and manufacturing of clay and concrete products. It has investment interests in the entities, as well as property development. The company has a market capitalisation of approximately $2.78 billion (as on 7 November 2019). Brickworks has more than 1,400 employees throughout Australia and New Zealand region. The company’s product includes retaining wall systems, precast concrete panels etc. 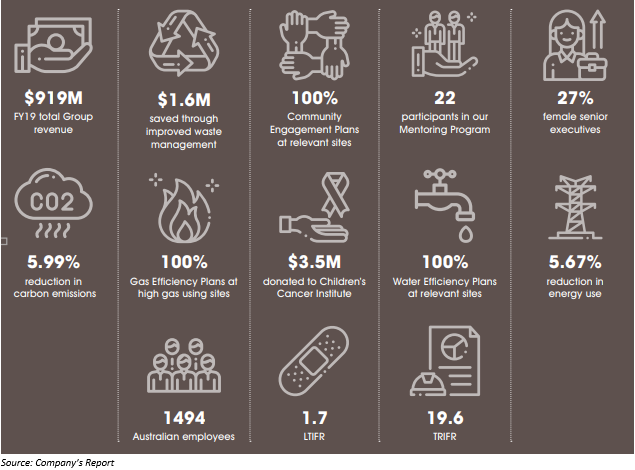 Change in BKW’s interests in CLV

On 7 November 2019, BKW via a release conveyed to the market on the change of its interests in Clover Corporation Limited (ASX: CLV). On 29 October 2019, BKW (substantial holder) reduced its voting power from previously held 23.10 percent to currently held 20.85 percent.

After the acquisition of Redland Brick assets’ conclusion in February next year, Building North America would be business of considerable scale, including;

Change of BKW’s interests in ACQ

On 4 November 2019, the company announced that it has changed its interests in Acorn Capital Investment Fund Limited (ASX: ACQ) from the earlier held 7.66 percent voting power to currently held 6.65 percent effective 30 October 2019.

On 29 October 2019, BKW notified on the hiring of Robyn Stubbs, (independent non-executive) Director to the BKW’s Board, effective 1 January next year.

Ms. Stubbs is also at present Director (non-executive) of ASX listed Aventus Group (ASX: AVN). She holds a Bachelor of Business from the University of Technology. The selection of Ms. Stubbs to the Board will boost the number of directors to 8 in order to enable an easy transition until the time, Brendan Crotty steps down in AGM (to be held next year).

On 21 October 2019, the company notified the market on the 85th Annual General Meeting to be held on 26 November 2019. The AGM would consider the below-mentioned components of the business;

On 20 September 2019, the company released an announcement that its Joint Venture Property Trust has obtained an approval from New South Wales Department of Planning, Industry and Environment to start development of Oakdale West Industrial Estate in Kemps Creek (Sydney).

The property trust has expanded significantly over the last 10 years and has more than $1.7 billion assets throughout western Sydney and Brisbane.

On 19 September 2019, the company announced the financial results for FY 2019 period ending 31 July 2019, a few highlights from the results are as follows: